Bryce Nelson, an award-winning journalist, dedicated professor and former director of USC Annenberg’s School of Journalism, has died at the age of 84. After two decades as a reporter at major news organizations, including The New York Times, the Los Angeles Times and the Washington Post, Nelson devoted the final 30 years of his career to training and mentoring future journalists while tirelessly serving the broader USC community.

“Bryce was one of the most beloved members of our USC Annenberg community, uniformly praised for his intellect, but also for the depth of his kindness and compassion,” said USC Annenberg Dean Willow Bay. “His service to both our students and our university was nothing short of extraordinary.”

Nelson joined the USC Annenberg faculty in 1984 as director of the School of Journalism, a position he held until 1988. He taught undergraduate and graduate courses from “Media and Society” to “Government and Washington Reporting” and “Newswriting” until his retirement in 2014. In addition, he led the school’s London semester program, focusing on research and international news media.

A three-time recipient of the Graduate Journalism Students Association’s Outstanding Faculty Award, Nelson was also recognized with a USC-Mellon Award for Excellence in Faculty Mentoring Undergraduate Students in 2008.

“Bryce was a dedicated educator and a passionate advocate for journalism’s ethical responsibilities,” said Gordon Stables, director of the School of Journalism. “He was a wonderful colleague and someone whose legacy still informs us within the school today.”

Professor of Communication Thomas Hollihan praised Nelson as a “transformational leader,” who helped lead the journalism school when it was merged with the communication school in 1994-95.

“Bryce was a man of great intelligence, compassion and integrity, and an outstanding friend, colleague and mentor,” Hollihan added.

When University Professor Geoffrey Cowan joined USC Annenberg as dean in 1997, he recalled Nelson being “one of the true shining lights.”

“Bryce was a talented teacher, principled leader and award-winning journalist whose work had an impact on society,” Cowan said. “He was known for his crusading reporting on issues of national security and the environment, for his leadership as a former Rhodes Scholar, and for his work for the Christopher Commission that brought about police reform in Los Angeles in the wake of the beating of Rodney King.”

Another colleague, Jonathan Kotler, associate professor of journalism, remembers Nelson as “the most moral man I ever met.”

“Across the four decades that I knew him, Bryce never failed to stand up to authority in his never-ending quest to have people do the right thing on behalf of others,” Kotler said. “For him, ethics were never situational.”

Nelson’s wife, Mary Shipp Barlett, also recalled how he balanced a steadfast commitment to his craft with his “trademark humor” and the “simple, thoughtful outreach” he shared with those across the school. “Every morning on his way to his second-floor office, he would pick up a stack of The Daily Trojan and stop by multiple offices to distribute a copy and say ‘good morning’ to staff,” she said.

Born in Reno, Nev., and raised in Boise, Idaho, Nelson received his bachelor’s degree in social relations and American history from Harvard University, where he also served as president of the Harvard Crimson. Following his studies at Oxford, he taught political science at the University of Pittsburgh before assuming aide posts for Sen. Frank Church and Sen. Hubert Humphrey’s vice presidential campaign.

This led Nelson to the Washington Post, where he covered congressional and foreign affairs, before joining Science magazine, where his reporting exposing government blacklisting resulted in major reform in federal security procedures and earned him the Albert Deutsch Award for Distinguished Journalism in 1970.

Nelson later made his way to Chicago, where he became the national correspondent and then Midwest bureau chief for the Los Angeles Times before returning to Washington, DC, to serve as the Times’ national correspondent there. In 1980, he was a Pulitzer Prize finalist for his investigative reporting series “The Poisoning of America,” which also earned him an Associated Press Award.

In his final reporting post before joining USC Annenberg, Nelson was a human behavior writer for The New York Times, garnering a distinguished contributor award from the American Psychological Association’s National Media Awards.

To honor Nelson’s many contributions to his field and higher education, the School of Journalism established the Bryce Nelson Award for Distinguished Journalism in 1990. Awarded annually, the honor is reserved for a graduating student who shows outstanding reporting and writing abilities, superior academic performance, and a commitment to high ethical standards in journalism.

Nelson is survived by his wife, Mary Shipp Bartlett, his son, Matthew Nelson, granddaughter Anneka Winton, and two brothers. He is preceded in death by his first wife, Martha Streiff Nelson, and his daughter, Kristin Nelson Winton.

“Bryce and I met late in life, when a mutual friend set us up because of our shared interest in journalism,” Shipp Bartlett said. “It was instantaneous attraction for me. He was charming, gentle, handsome, brilliant, and funny. Irresistible. We had 11 years together — and my first impression never changed.”

A memorial service is planned at All Saints Church in Pasadena in the coming months. Further information is forthcoming.

A memorial tribute to Nelson has been published in the Los Angeles Times. 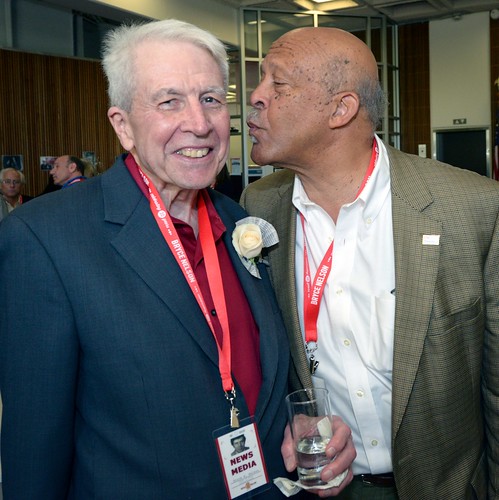