October 29, 2014
Susana Guerrero
On October 1, Wallis Annenberg Hall officially opened its doors to visitors who had the chance to see the daily tools students use, in addition to the unique features of the new building.
One of those important features is the the donor wall thats to the right of the Forum on the first floor. Its height is impressive as long silver wires — that hold white panels — expand beyond the second level of the new building. What is more remarkable are the white panels that highlight names of distinct individuals who made large donations towards the completion of the ANN building.
Of the various donors the wall mentions, a few stand apart not only for their generosity but also for the successful careers they have set out for themselves. Diana O’Leary, associate dean of external relations, explained that some of these special donors include; Marc Brown, Jacki Cisneros, Jeff Smulyan, Marilou and Mark Hamill, and Bob Gold. 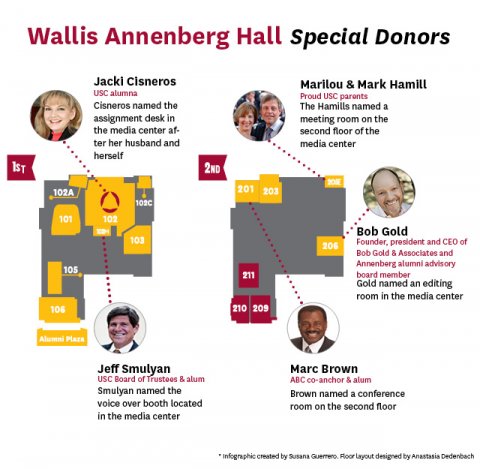 Listed are some of the donors who gave towards naming a room or object in the ANN building.

USC Annenberg / Susana Guerrero
“Alumni and parents are very passionate about the next generation and they want to make sure that our students have the tools to succeed,” O’Leary said. The second level of the new building provides several viewpoints of the expansive facility. Seating areas surround the perimeter of the second floor, classrooms are arranged throughout and a large, bright golden section with crisscross motifs lies to the side of the staircase. That marked section holds offices in addition to a large conference room named after ABC News Anchor Marc Brown. The conference room naming was something particularly exciting for the school, O’Leary explained.
“We’re ecstatic that our alumni are coming back to support the building because they’re inspired by the future of what Annenberg can do for its students and journalism,” O’Leary said.
Brown graduated with broadcast journalism from USC. He credits Annenberg for his successful career and decided to give back to the school to upkeep the invaluable training and education that he gained here as a student, Brown explained. “As a proud supporter of the school, I hope to help cultivate the generations of excellent young journalists who will learn their craft here,” Brown said. “Whatever form journalism takes in the decades to come, those who shape it will come from here.” Brown also congratulated the school on its grand opening ceremony with fellow USC Annenberg alumnus and ABC Eyewitness reporter, Elex Michaelson, from the ABC7 studio. Some of the donors aforementioned had the opportunity to name building features that held a particular significance to their careers, as alumna Jacki Cisneros did. In honor of her long career behind the assignment desk at NBC, she named the 360-degree desk in the media center. “I just had to have the assignment desk, because that's what I did,” Cisneros explained in an interview last year. Cisneros was excited about students having a professional assignment desk, O’Leary explained, and about the potential of students becoming marketable in the workplace from their training at USC Annenberg. Cisneros received a degree in communication.
Like Cisneros, Jeff Smulyan, USC alum and member of the USC Board of Trustees, named the voice over booth inside the media center because it held a special place for him. “That is a nice tribute to his passion for the radio industry,” O’Leary said. Smulyan expressed his admiration for the school and was impressed by how much it has developed over the years. “Today's USC Annenberg School is on the cutting edge of every area of media — no one else is doing the same caliber of work in journalism or communications,” Smulyan said. “I'm happy to do my part to support a field that is so near and dear to my heart." Smulyan is the chairman, president and CEO of Emmis Communications, which hold radio and magazine properties all over the United States. This was why he was excited to be part of the newsroom, O’Leary explained. He graduated with a degree in communication from USC Annenberg and later received his law degree at USC Gould School of Law. The media center has certainly gained a lot of attention not just from students and faculty who use it, but from donors who have named rooms and sections within the space. Furthermore, the process of naming was not limited to alumni. Proud USC parents like Marilou and Mark Hamill demonstrated their continual support for the school by naming a meeting room on the second floor of the media center. “Marilou has been an active volunteer with the university, and they were excited to do something to support the school.” O’Leary said On the grand opening celebration, alumni toasted Wallis Annenberg Hall in studio A and they expressed their thoughts on the new building. “I think the building itself is really cutting edge, and what it does is personify the whole feeling of the college of communication,” Scott Tamkin, president Nest Realtors and a member of the USC Annenberg alumni advisory board, said. “Students today come out with a convergence of technology and it is absolutely incredible.” 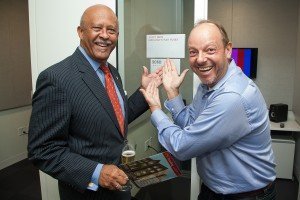 Bob Gold, founder, president and CEO of Bob Gold & Associates and USC Annenberg alumni advisory board member, named one of ten individual editing rooms of the editing suite in the media center. He was also one of the several alums who visited during the grand opening ceremony, and he gave insight to why he gave back to his alma mater. “A school like Annenberg is creating an environment to give people the skills to say: ‘Lets communicate together. Lets get on the same page and lets make wonderful things happen,’” Gold said. Gold holds a master’s degree in communication management from USC Annenberg. Alumni contributions have not only helped with the construction of the new building, but they have also aided in bringing capital towards the school’s fundraising initiative of $150 million. Upon reaching the $100 million mark, Dean Ernest J. Wilson III gave special thanks to donors for the accomplishment. “The outpouring of support, from more than three thousand sources, is a tribute to the extraordinary work being done by our students, alumni, faculty and staff,” Wilson said last March. According to O’Leary, the school has met $113 million out of the total amount USC Annenberg set out to meet by the year 2018. “It really has been a once in a lifetime opportunity to bring our alumni back to campus and show them the great opportunities that still lie ahead,” O’Leary said. “They are giving back to pay tribute to the wonderful experience they received here and how it made an impact on their careers.”

A look back at election night at Wallis Annenberg Hall
Photos: Dean's Forum: Diversity at Annenberg: From Inclusion to Empowerment to Leadership