This year’s Kenneth Owler Smith (KOS) Symposium, in its 27th year, was hosted by the USC Annenberg’s Center for Public Relations and included a full roster of events.

In addition to offering opportunities for USC Annenberg students to network with PR professionals, the event included a keynote speech by leading PR executive Paul Holmes and an experts’ panel discussion on the release of its second annual Global Communications Report (GCR17). The report is the center’s signature publication, a comprehensive survey of more than 800 public relations executives from around the world.

Founder and chair of The Holmes Group, Paul Holmes delivered a presentation titled “The Future of Truth” to a standing-room-only crowd in the auditorium at Wallis Annenberg Hall. The speech touched upon fake news – how it’s a threat to the media and to the public relations industry – and ways to combat it.

USC Annenberg’s Fred Cook, CEO of Golin and director of CPR, said the center decided six months ago to title the event “The Future of Truth.”

“Little did we know what a prophetic topic it would become. The survey we conducted in January – most public relations professionals didn’t think it was an important trend impacting our industry,” Cook said before the speech. “We are hearing about fake news every single day in the media and almost every single day from our current president.”

“I’m here to try to explain to you if you’re a part of that why you’re wrong,” Holmes said. “I sincerely believe fake news in its current form is an existential threat to the public relations industry.”

He said the pushback he gets from public relations professionals is that fake news has long existed. What’s changed over the last couple of years is the rise of social media and the rise of epistemic closure which is only possible in social media, he said.

“Which means you get all of your news from within a bubble of your own making and allows phony stories to travel more quickly and be more widespread,” he said.

Holmes said public relations professionals need to have a plan when fake news happens. He said the definition of fake news is news that is designed deliberately to mislead or to obfuscate.

Holmes spelled out ways to combat fake news. His suggestions include: having a thorough understanding of the fake news environment and persuade people not to believe it; support initiatives within the social media realm that are designed to diminish and tackle fake news; unite with other organizations and make statements to condemn fake news; start promoting media literacy and instill critical thinking skills.

He said the public relations industry has to commit not only to honesty but to intellectual honesty.

“We have to draw a clear line between what I would call ‘public relations’ and what people within the industry would call ‘advocacy,’” he said. “Intellectual honesty means you only make arguments in which you believe. You don’t make arguments that are merely convenient to your client at that point in time.”

Public relations’ job is to build relationships, he said.

“Credibility matters, authenticity matters, truth matters. We have to fight for those things because without them we are irrelevant,” he said.

Lopez said she wants to work in a job that’s a hybrid between journalism and public relations, adding she wants to get into content creation. She was able to meet and speak to professionals like CPR Board of Advisors Tyler C. Stevens, of Shareability.

“It’s interesting to see people that are doing the things I would love to do in the future and pick their brain a little bit because it’s so valuable,” she said. “Companies now want to focus on content creation, corporate social responsibility, so it’s an exciting time to jump on board.”

Medina Diaz said it was good to speak to Stevens about steps she should be taking and things to do in order to get a job like his.

“The event was definitely an opportunity I don’t think I would have gotten anywhere else, with all of these people from Oracle and Starbucks,” she said.

“I think the trend is real but the way I like to look at it is marketing has become enlightened about the value of public relations,” Harrington said. “We are all chasing the same set of distribution channels in many respects now to get our audiences.”

Cook asked the panel about the definition of public relations. He asked the audience if, in five years, public relations would describe the job they’re doing. In the survey itself, 87 percent of the people surveyed said no.

“When you ask the average person what is PR and what do you do and a lot of people will go more pejorative in our daily activities,” Sugishita said. “They would think we are doing all the things we aren’t engaging in. We are facing our own reputational management issues so I do think as an industry, we come together and find a way to re-describe who we are. Have it be something more ethical-based and fight and combat these unfortunate terms.”

Please view photos of the event below: 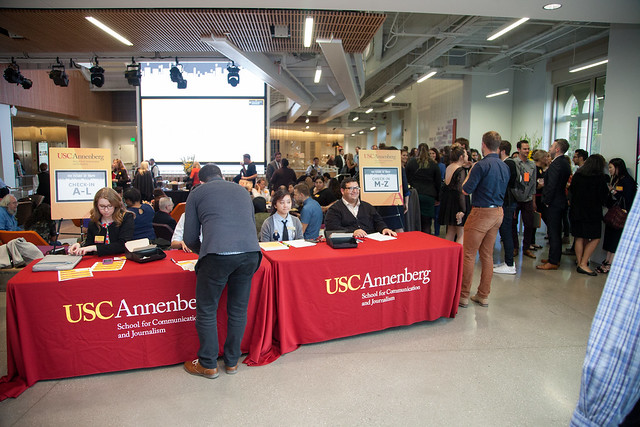