Last year, the USC Annenberg Center for Public Relations partnered with health services company Humana, and Annenberg’s Media, Diversity, & Social Change Initiative, led by Dr. Stacy Smith to look at how seniors are represented in the media. The partnership resulted in a joint study of over 100 films from 2015, including every Academy Award nominated picture for the year. It found that senior citizens are not accurately portrayed and are very often subject to ageism and unequal representation. That full report, title Over Sixty, Underestimated can be found here.

On Feb. 16, 2017, USC Annenberg's Center for Public Relations and the Media, Diversity & Social Change Initiative along with Humana, held a panel discussion on the report and the subject of Hollywood’s ageism entitled Over Sixty, Underestimated: A Healthy Look at the Silver Screen. The panel was moderated by John Horn, host of KPCC's The Frame, and panelists included Caroline Cicero, ‎assistant professor at the USC Leonard Davis School of Gerontology; Stacy Smith, associate professor of communication and director of MDSCI at USC Annenberg; Dr. Yolangel Hernandez Suarez, vice president and chief medical officer of care delivery at Humana; Gary Lucchesi, film producer and president of The Producers Guild of America; and actress Frances Fisher.

Below is a select list of key publications that have recently covered the report or the Feb. 16th event at Wallis Annenberg Hall.

NPR: In A Film Industry Focused On Youth, Older Characters Are Tough To Find

KPCC: A New Study Puts Some Numbers to Hollywood's Issues with Ageism

Wired: Tina Fey Nailed It: Hollywood has an Ageism Problem

Starts at 60: Oscars accused of being “ageist”

If you were unable to attend the panel discussion in person, you can find a recorded version of the live stream here. 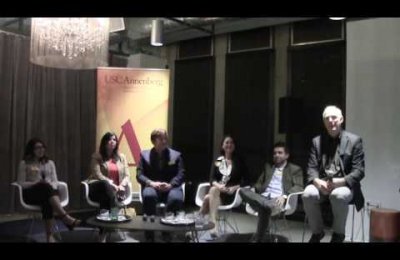