Forum on Charlie Hebdo Sparks Conversation about Freedom of Expression

In the wake of the tragic attack on French satirical magazine Charlie Hebdo, USC Annenberg released a statement affirming “the global human right to freedom of expression and to a free, independent press.”

On Tuesday, a special noontime forum focused on those rights. Students, faculty and members of the USC Annenberg community gathered to discuss freedom of expression and the responsibilities of journalists and communicators given that freedom.

The event was opened by directors of the communication and journalism schools, Sarah Banet-Weiser and Willow Bay, respectively, before being turned over to moderator Vice Dean Philip Seib.

The forum included special guest and USC Annenberg visiting fellow Patrick Chappatte, who works as an editorial cartoonist for International New York Times. Chappatte is also French, and counted members of Charlie Hebdo’s staff among his colleagues and friends.

Seib began by sharing a quote from former Supreme Court Justice Hugo Black, who said in 1962: “My view is, without deviation, without exception, without any ifs, buts, or whereases, that freedom of speech means that you shall not do something to people either for the views they have or the views they express or the words they speak or write.”

“That is a good summary of where American law and American principles are in terms of freedom of speech,” Seib said. “And there’s not really much debate about that as a principle not only in the United States, but in much of the world today. That principle is enshrined.” 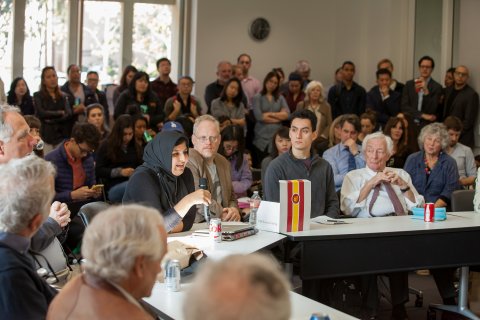 The crowd listens during a conversation about the long-term media issues emerging from coverage of the January 7, 2015 terrorism events in Paris.
USC Annenberg
The room, filled to the brim with about 150 people, then collectively turned to a series of thorny questions: whether there are any limits to these freedoms, what role editorial policy plays in expressing those freedoms, how the question of audience affects this debate, and what responsibilities (if any) people in communication fields are called to uphold.

Professor Manuel Castells noted that when discussing the content of Charlie Hebdo — satirical articles and cartoons that mock religious groups, political beliefs, cultural traditions and more — it must be discussed in the context of French society.

Editorial cartoonist Chappatte added that the meanings of these cartoons can be difficult to understand, “even in the day of Google Translate.”

This is especially true for those reading and watching from the United States where, as Chappatte put it, there is a constant “worry about people that could be offended by a picture or images.” Chappette argued that Charlie Hebdo was free of forms of “political correctness” prevalent in the U.S. because of the nature of their work and its locale.

“If you look at Charlie Hebdo yes, you have those big-nosed, ugly characters, but you have to understand their specialty is to pick at any establishment, any power, any individual,” Chappatte said. “Most people in their cartoons were ugly because they were denouncing that most people see the ugly in everyone.”

After the attack, news outlets were tasked with deciding whether or not they would publish the controversial Charlie Hebdo cartoons. Some news organizations opted not to publish the cartoons, noting cultural sensitivity.

Professor Judy Muller felt that the debate about whether or not to republish the controversial content was “kind of moot.” The cartoons are easily accessible online, thus giving many editors another reason not to publish. Does relying on the wide digital availability of the images undermine freedom of expression?

The subject was widely discussed in the news, particularly in stories about an exchange between Dean Baquet, executive editor of the New York Times who elected not publish the cartoons, and USC Annenberg professor Marc Cooper, who thought they should have been published.

Noting this exchange, Seib asked “Should offensiveness override the right to publish?” 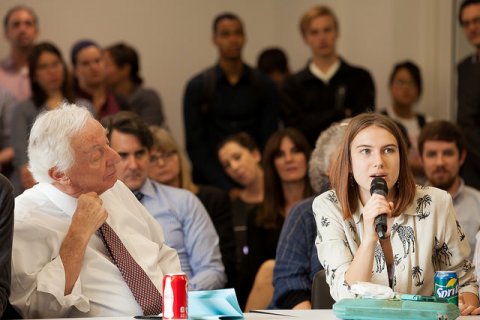 Francesca Bessey, senior opinion editor at Neon Tommy, had to answer this question recently as she recently ran a column on Charlie Hebdo in which she and the writer elected not to publish the cartoons in the column, but rather link to another site where they could be viewed.

“They’re there for you to see whether people make the editorial decision to release them or not,” Bessey said.

But this is more than a question of newsworthiness, Bessey continued.

“There is another question there and that is, can images be harmful? And I think that if you look at any horrific and tragic incident in the world’s history, we can see how imagery and media can be extremely harmful.”

While images can indeed be harmful, that is not their intention, Chappatte responded.

The aim of editorial cartoons is not to offend, he said, it is the same aim that a journalist or commentator has: “to make a comment, to analyze, to denounce, to say something,” Chappatte said. “And in the process, you can offend.”

The job, of writers and editors, cartoonists and commentators, is to balance freedom of expression and the responsibility of expression, Chappatte said.

Dean of USC Annenberg, Ernest J. Wilson III, said this was why the school leadership felt it was important to hold the forum. He wanted to have a discussion that allowed for “all of us to interrogate our responsibilities.”

“I’m proud for all of us for coming together as a community of shared values to talk about these kinds of issues,” Wilson said. “I think it does underscore the importance of journalism education, communication education, public relations education, so that we can bring this contextualization when terrible, messy, global, confusing things happen.”

To contextualize, to continue to embrace freedom of expression in a responsible way, Chappatte offered this advice: “We need to criticize more than ever, but we need to listen at the same time. This is the struggle.” “It all happened in blood and it’s going to change forever the way we think, the way we work,” Chappatte concluded. “It will always be in the shadow [of Charlie Hebdo].