Congratulations to the Class of 2016!

As part of the University of Southern California's 133rd commencement ceremonies, USC Annenberg celebrated the conferral of bachelor's, master's and doctoral degrees to 951 students on May 13.

Twin throngs of graduates gathered under high, white tents during concurrent ceremonies, as the School of Communication and the School of Journalism delivered congratulatory, inspirational messages to the newest ranks of USC Annenberg alumni.

Their smiles were wide as they snapped photos with fellow graduates, shared hugs and scanned the sea of families and friends for their own familiar supporters. More than 6,000 family members, alumni and friends of USC Annenberg attended the ceremonies to cheer on the class of 2016.

Dean Ernest J. Wilson III welcomed two acclaimed veterans in their fields to help celebrate the occasion, share their own experiences – and offer advice along with messages of congratulations. Kim Moses, award-winning producer of hundreds of hours of network television, spoke to School of Communication graduates; Judy A. Smith, crisis manager extraordinaire and inspiration for the TV show "Scandal," spoke at the School of Journalism gathering.

"In just a moment, you will walk across this stage and be graduates. You will be doing that as a collective group – you will not be alone. You will be walking together, and that’s perfectly appropriate, because we like to think since you arrived at USC Annenberg you have been working with groups who have supported you,” Dean Wilson told School of Journalism graduates. "In addition to collaborating with your outstanding cohort, you have worked with extraordinary faculty, who have been inspired by you.”

"You've also walked together, your whole lives, with the people who came to be with you today," he added, winning more applause from graduates in honor of their supporters.

Willow Bay, Director of the School of Journalism, had opened the ceremony on Argue Plaza by welcoming the class of 2016 as an exceptional group of graduates – and only her second as school director.

“I am standing here filled with emotion and brimming with pride for all of you, and I know all you veteran faculty feel the exactly the same way,” she said, smiling. “So it can’t be because I’m a rookie. It must be that this class, the USC Annenberg School of Journalism Class of 2016 is just that special.”

Bay focused on one specific skill that would guide graduates on that mission: listening. It's a skill specifically developed at USC Annenberg through study and practice, and it is more crucial now than ever, she said.

"In today's world, where so many are shouting to be heard, where anger and frustration are no longer simmering beneath the surface but are exploding into open air and open arenas," Bay said, "many still go unheard." 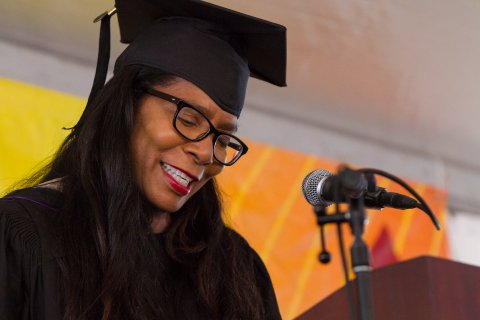 Judy Smith, founder and CEO of the crisis management firm Smith & Company as well as the inspiration for the ABC series Scandal, speaks to the graduating class of 2016 at the School of Journalism Commencement.
USC Annenberg/Benjamin Dunn
Smith received a personal introduction from a USC Annenberg alumnus who knows her well. Her son, Cody Boulware, graduated with a bachelor's degree from the School of Communication in 2012 and works as a public relations/marketing account executive at Dan Klores Communication in New York.

His mother, Boulware said, may be one of the best known “fixers” in the world – and the muse of a groundbreaking TV show – but to him, she is a proud mom who also happens to be goofy, funny and loving. She’s a mom who hops back-to-back, cross-country flights for his basketball games, takes a train ride just to have dinner with him and cooks on her own birthday.

Even when the family would rather dine out, he said, drawing laughs.

“In reality, while she has inspired so many people and inspired an iconic TV show character, the people who she inspires most are the ones closest to her,” Boulware said. “I hope today she can inspire some of you, as you take your first steps into your evolving lives and careers and graduate from the greatest school in the world.”

Smith made a name for herself as a strategic and crisis communication expert after handling some of the most historic and well-known public-relations episodes of our time, from the Iran Contra investigation and the Monica Lewinsky scandal to the hacking of Sony Corporation’s email.

But she didn’t plan that career path. She worked for non-profits before deciding to try law school. She earned her degree from Washington College of Law and was set to join a large firm in New York. A chance conversation led her to work as a prosecutor on the Iran Contra case, and then to the White House, where she was Special Assistant and Deputy Press Secretary to President George H.W. Bush.

From there, she was a senior VP of corporate communications at NBC and a partner in several PR firms before founding her own, Smith & Company. Over the past quarter-century, she handled the Enron inquiry, the LA riots and SARS. She’s the go-to for celebrities and their legal affairs, including Kobe Bryant, Chris Webber and Juwan Howard. She counsels Fortune 500 companies on mergers, recalls and litigation. Wal-Mart, Nextel and McDonald’s are on her list.

Smith even counsels heads of state all over the world. She is the author of the book, “Good Self, Bad Self: How to Bounce Back from a Personal Crisis.”

Stepping out of your comfort zone is where you’re likely to find your calling and your success, Smith told the sea of journalism and public relations graduates. “Do not be afraid to take chances, and don’t be afraid to fail. For me, oftentimes that really, honestly brings you much closer to what you hope to achieve.”

“There is no timetable for success. There’s no plan. You have to be flexible.”

“Choose,” she said, “to trust yourself.”

Smith counseled her audience: Don’t be afraid. “Why not approach your future as a badass? Be a gladiator for yourself,” she said, drawing cheers and applause from graduates.

“It doesn’t mean that it’s going to guarantee you success. But if you give into your fear and give into your doubt, that certainly will hold you back.”

Smith signed off with advice that roused the crowd and inspired graduates: “Now let’s get out there and handle it!” 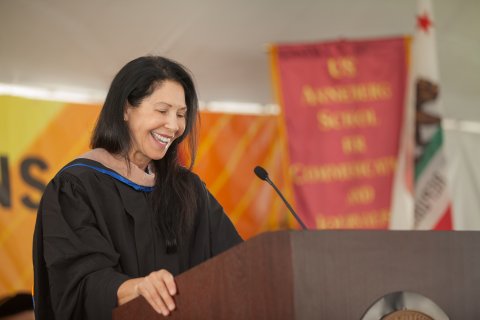 Kim Moses, Principal and Executive Producer with Sander/Moses Productions, smiles during her speech at the USC Annenberg School for Communication graduation ceremony on May 13, 2016.
Annenberg/Brett Van Ort
Striking down the often-heard clichés of millennials as lazy or “selfie-obsessed,” School of Communication Director Sarah Banet-Weiser told the thousands of family members, friends and graduates gathered under the massive tent on McCarthy Quad: “Not so much.”

Banet-Weiser congratulated the 670 graduates earning bachelor’s, master’s and doctoral degrees in communication, Communication Management, Global Communication, Digital Social Media and Public Diplomacy. As leader of the faculty and an active professor herself, she called her students this year “the most engaged, most passionate and most activist group I can remember.”

“Every day, students would ask me in different ways what they could do to change inequalities in the world, in media, in higher education, to make it better for generations to come. At times, I wanted to say, ‘Let’s just talk about Kim Kardashian,’” she joked, as her audience laughed.

“The questions my students asked were so filled with conviction and passion and honesty about genuinely engaging with the world.”

In fact, each generation tends to generalize about whether those coming after them are smarter, work harder, lives better, Banet-Weiser said.

Speaker Kim Moses, a veteran TV producer with more than 650 hours of programming and digital content in her body of work, urged School of Communication graduates, first and foremost, to be “present” as they move forward, in work and in life.

She described how she makes a point, before her speaking engagements, to meet people in the room, to look them in the eyes, hear their stories and discover something new.

“There is a big mindset in my industry that you have to be the first to pull the trigger. Wrong. A person succeeds because she knows what the hell she’s talking about and because she’s taking the time to discover,” Moses said.

Moses offered more practical advice, about how to move forward after the parties and pomp and circumstance of graduation ceremonies are over.

“You’ve got your degree, your passport to the future. But how do you make the most of this access and springboard into an industry that’s in the throes of reinvention?"

“Do it one step at a time. Get a job, a beginning, a start. Somehow, some way,” she said. “Chances are, you’re not going to get the job of your dreams next week. That’s not going to happen. But ride the wave that’s there.”

And on the job, the key is to work harder, better, longer than your peers, she said. “Believe me, they won’t be able to live without you.”

She told her own story, one that took her from an upbringing in a poor rustbelt town in Pennsylvania to Capitol Hill as a Congressional aide. Everyone thought she was crazy, she said, when she quit Washington, D.C. to pursue her dream of working in the entertainment industry. At 30, she took a job as a production assistant and never looked back.

She went on to serve as executive producer of the popular CBS series “Ghost Whisperer," and she also produced “Profiler” and “Reckless.” She’s known for her work at the intersection of TV and digital media; she pioneered the Total Engagement Experience (TEE), a business and creative model for TV that uses broadcast material as a component of a broader, multi-platform entertainment campaign. The strategy uses the web, mobile, publishing, music, DVDs and video games to distribute and drive content.

Moses’ work centers on creativity, this in the center of an industry structure that is rigid, she said. Studios and networks have strict limits on how they operate, but she goes beyond those limits by being open to new ideas, listening to her inner voice and by breaking rules.

As an example, she talked about how she recently took her production companies to global markets, against the advice of her peers, based on analytics and research that showed a demand. Her colleagues told her she would be diluting her resources, but the venture has been successful.

So far this year, she has led shooting in Paris, Prague and Mexico City and has several deals with studios around the world.

“There are instances when you’re going to fail – you’re going to fall right on your face. But you get back up and get in the fray,” Moses said. “Challenge yourself to become a warrior. Not to inflict harm on other people, but to do things intentionally. To focus your energy for maximum impact and influence, be fearless and follow through with passion.”

USC Annenberg graduates already have an advantage, before their work lives have even begun.

“Be deeply, deeply grateful that you’re on the track you’re on,” Moses said. “Remember that working at something you love is not inevitable. It is a privilege that few get to experience, and it is precious and you must cherish it.”

Transcendence is something to continually strive for, she said, a lifelong process that she herself is still experiencing. Her voice catching, Moses shared that her husband and work partner, Ian Sanders, “the love of my life,” died suddenly last week at the age of 68.

The news took many in the crowd by surprise. “I am transcending the unimaginable before your very eyes,” Moses said. Her audience responded with a long, standing ovation.

“Transcending is not easy. It’s hard. And you’re going to fall, because that’s what happens when you move out of your comfort zone."

“Next week when you leave the gate, you stumble and you fall, you get up and you get going. You will transcend because you are badass and beautiful, and you’re gonna love the path to discovery.”