Every year the International Women's Media Foundation award three female journalists the Courage in Journalism Awards for creating outstanding stories — many times in the face of danger. On Tuesday, USC Annenberg was honored to host this year’s recipients in a special event where the women described the types of work they produce internationally. During the conversation, director Willow Bay asked the women to describe a story that was particularly moving, but it was a difficult task for the guests to identify only one. Solange Lusiku Nsimire, editor in chief and publisher of Le Souverain, recounted an unsettling story of a Congolese woman who had been kidnapped by rebels and raped on several occasions. Lusiku Nsimire said that in the Democratic Republic of the Congo the real revolt dealt with the rights of women. To avoid the insecurity, the media and most people have chosen to remain silent in the face of injustice, she added. “Africa is a continent that is meant to be outspoken,” Lusiku Nsimire contested. According to Lusiku Nsimire, 80 percent of the media in the Congo is made up of radio and television, but there is hardly a written press. She felt she had to take a stand and write down everything that occurs in her country for the benefit of future generations. However, the written news comes with its perils. When Lusiku Nsimire writes the truth as it is, people have come up against her. What’s worse is that there are very few women, if any, who edit newspapers in the Congo, and when they do these women are greatly criticized, Lusiku Nsimire said. The forum opened with videos introducing each woman, their background and the journalism they do in some of the world’s most dangerous countries. In each case, every speaker said that they faced danger and received several threats throughout their coverage. Like the rest of the speakers, Lusiku Nsimire has felt a sense of discouragement as a journalist but in those moments she has reminded herself why she decided to be in the business. “I realize that I chose to do this profession and that I do this for my country,” Lusiku Nsimire said. “I want help them build the collective memory.” 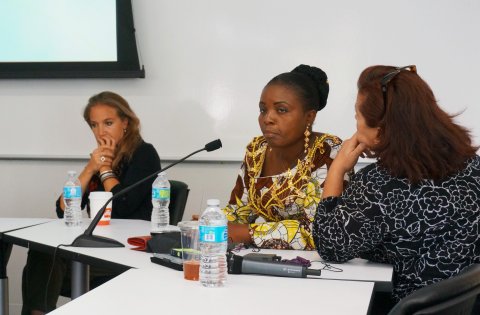 Solange Lusiku Nsimire recounts a story she covered in the Democratic Republic of the Congo that deeply moved her.

The IWMF started in 1990 when a group of women journalists in the District of Columbia noticed a large gender gap in news media. They became cognizant of their colleagues who were reporting around the world, and realized that those women needed recognition. Elisa Munoz, executive director of the IWMF, explained that in addition to the journalism awards, the organization offers programs around the world to advance the skills of women interested in journalism. Furthermore, IWMF host’s international reporting trips to areas that are either under-reported or reported poorly, Munoz explained. “Last year we took four groups of women journalists to the Democratic Republic of the Congo to report on anything except rape and war,” Munoz said. “They reported on small businesses, environmental conservation, the aid in that country and really anything that portrayed the DRC as a society rather than a warzone. We will be doing more of that in the years to come.” Myah Williams, a masters in specialized journalism candidate, attended the conversation and was touched by the stories shared. Despite the heavy subject matter, she said it was important for the speakers to openly discuss the issues they face in the field as women. "It's very sobering to hear the experiences of other women from different parts of the world who are in the field that I’m studying to be in,” Williams said. “These stories need to be told.”

Brankica Stanković, a Serbian journalist for TV B92 and editor of the investigative program “Insider,” said that since 2009 she has required security guards to be with her at all times due to the large volume of death threats she has received. According to her biography on the IWMF website, Stanković’s investigative work has revealed crime, corruption, and links between mafia, politics and business that shocked Serbia. The Serbian Ministry of Internal Affairs completed an official assessment on her safety and concluded that she was at risk and needed protection. Stanković admitted having guards with her at all times has been difficult because it has drastically changed her daily life. Completing tasks as taking out the trash is out of the question unless her guards accompany her. Moreover, it has affected her career. “I have been followed by the security for five years now,” Stanković said. “It’s very hard to work under these circumstances because it’s hard for me to meet sources.”

Arwa Damon, CNN senior international correspondent, has been shot on multiple occasions while reporting, she explained. She knows that she has become a target in a sense and has been required to alter the way she reports stories. “You have to worry about your drivers, your translators, your local staff, the cooks, and anyone who works at a hotel that you’re associated with because what you’re doing is fundamentally putting them all at risk,” Damon said.

When professor Mary Murphy asked the women how they shut off their own emotions when covering a story, Damon said that to a certain extent, she does not. She explained that there has to be a certain level of compassion in every story. “Part of our responsibility as journalists is to somehow take the sheer overwhelming emotions other people are going through and present it,” Damon said. “If you’re not feeling what a human being is confronted with and if you don’t have compassion, how are your suppose to translate that to an audience?” For Bay, having Annenberg students listen to the stories shared during the event was necessary for them to understand how fortunate they are. “It’s a luxury for students and professional journalists who live and report in this country,” Bay said. “Hearing their stories draw inspiration, strength, courage and wisdom.”