Growing up, the Desert Sun was the one stop shop for all the news in the Coachella Valley. Reading the paper with in the morning with my family became a daily ritual and it is where I grew my love for journalism and reading. Never did I imagine that I would have the opportunity to join the newspaper and see my own name on an A1 cover, but that is precisely what happened this summer. 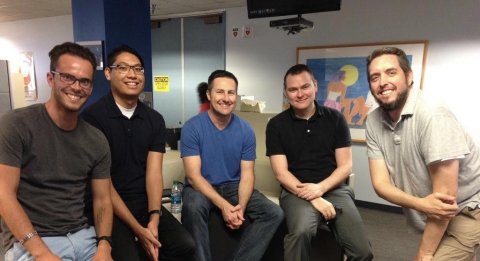 Johnny Flores Jr.
I submitted my application in February with little hope that I would receive the internship. After all I was only a second semester Freshman and despite my experience in news, my youthfulness would hold me back. In May I met with the Executive Editor Greg Burton and after a long conversation and a test in-between, he decided to take a chance on me. I was one of three interns that summer and the youngest ever. I would take my talents to the sports department where I would cover an array of sports across the Coachella Valley including soccer, boxing, and youth baseball.

My first assignment? Accompany my colleague Andrew to cover Clay Helton’s speech to our local USC booster club. I couldn’t believe it. One day I was setting up my work laptop, meeting colleagues, having lunch with editors, and learning the content management system and the next I was on my way to speak with Clay Helton about the upcoming football season. We had the pleasure of personally sitting down with Coach Helton and discussed at length the upcoming season. Unfortunately, no spoilers were given.

This first assignment would set the course of the entire summer. No day was quite like the other. Some of my fondest memories include chasing down some of local MLB draftees at the LIDS hat store with my mentor Shad, interviewing 16 year old girl who’s looking to change the landscape of female boxing, and covering a local soccer team on their road to a national championship. The days were long and the weather was hot, but I would not trade it for the world.

This experience would then allow me to obtain an internship with USA TODAY SPORTS for the fall semester. My days were a little bit different at USAT. As a member of the digital team I was tasked with helping make content come to life. This was achieved through a number of ways including: revising a story, adding a gallery, proofing a video, posting a story, writing catchy headlines, and doing SEO research among other things. It was a stark contrast from what I was used to as a writer, but taught me a valuable lesson in that journalism is a team effort. For every writer there is a producer helping shape the content at hand and drive our company’s vision forward.

Juggling school and work was quite difficult. I would go to class at 9:00 a.m. to come back just in time to change and head out to Culver City where I would work until 12:00 a.m. and be at class at 8:30 a.m. the next day. Although the hours were strenuous, being able to help make content come to life for our thousands of viewers was an immense pleasure.

Helping out my colleagues Simon, Jace, and Justin during Game 7 of the World Series was an extreme adrenaline rush. Likewise, helping oversee the various UFC pay-per-views and Fight Nights throughout the latter half of 2016 was equally as fun and at times very stressful.

As I look towards my next opportunity, wherever it may be, I will look fondly on the time spent at both these ventures.