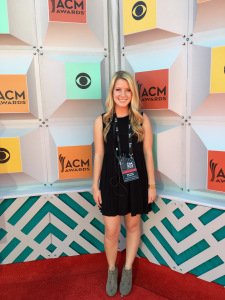 This past spring, I had the opportunity to intern full time at The Academy of Country Music in Encino, CA. I am a graduate student in Communication Management, and have hopes of establishing a career in marketing and publicity in the music industry. I came across this internship on The Academy’s website in September, and throughout the next several months went through three rounds of interviews, eventually landing an internship in Public Relations and Marketing for the spring semester.

This internship was everything I had hoped and more. The first three months of the internship were spent in the office, conducting social media research, participating in weekly team conference calls, pitching stories about the 51st Annual Academy of Country Music Awards and Party For A Cause Music Festival, and creating content for ACM social platforms.  The PR & Marketing team and the Ops & Events team all operate in-house, so I truly got a first hand look at exactly what it takes to produce these entertainment events on such a massive scale. Once everything was set to go, we loaded out the entire office and took off to Las Vegas, NV for the Week Vegas Goes Country.

Once PFAC started, the weekend flew by at 100mph. While at the festival, our team was in charge of escorting media between the media lounge and interview rooms where some of the biggest names of country music such as Luke Bryan, Dierks Bentley, Carrie Underwood, Sam Hunt, and Kenny Chesney were answering questions. Once the headliners came on, we were allowed to sit back and enjoy the show, and it was amazing to see everyone’s hard work come together in front of 20,000 people.

On the final Sunday of that week, the Awards Show took place. One of my jobs was to ensure the flow of the interviews on the red-carpet stayed clear and steady, and at one point, I got to present Little Big Town and Miranda Lambert with their trophies for their collaboration! Once the show started, we escorted winners, presenters, and performers from their seats to press and photo rooms, while also getting to take in some of the best performances of the night (Dolly Parton & Katy Perry’s duet was unreal!)

Overall, this internship was incredibly exciting and fun, while also being challenging and a great learning experience. Everyone at the ACM is so friendly, approachable, and they truly utilize the interns and made me feel like a part of the team. I am so grateful to have gotten my feet wet in entertainment PR with the Academy.