Summer Doctoral Institute for Difference in Media and Culture

The week of June 15-19, USC Annenberg School for Communication and Journalism held its second annual Summer Institute for Diversity in Culture and Media, a long name for a simple premise: bring together 20 doctoral students from across the country and put them in a room with faculty who study the same subject. The annual event is now a signature program of the emerging Institute for Diversity & Empowerment at Annenberg (IDEA).

“It’s basically kind of a week-long workshop-type institute-camp, that’s a combination of graduate students from around the country and faculty from here at Annenberg, and from other places and universities as well,” said Raffi Sarkissan, who presented his research on the Los Angeles LGBT film festival Outfest.

Sarkissan, a fourth-year USC Annenberg Ph.D., is one of the 20 students who participated in the Summer Institute. He joined colleagues from institutions like UC Berkeley, the University of Pennsylvania, and the University of Washington, who presented papers based on their dissertation subjects, research, or articles they’ve written. They were received by visiting and home faculty, including the director of School of Communication Sarah Banet-Weiser, communication professor and Institute co-director Josh Kun, communication professor Christopher Holmes Smith, and associate professor Robeson Taj Frazier, for an intensive dissection of the media’s portrayal of racial, ethnic, sexual, and gender diversity.

Sarkissian grew up in Los Angeles with Armenian immigrant parents, and embraces both his self-professed queer identity and his Armenian heritage. 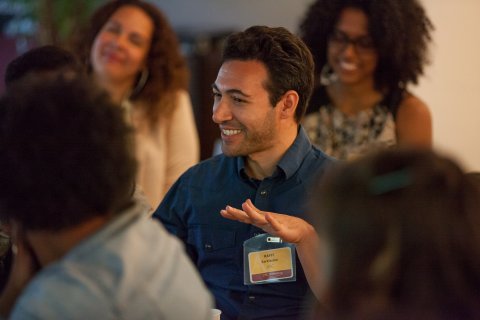 Raffi Sarkissian, doctoral student at the University of Southern California introduces himself to faculty and doctoral candidates from across the country.
USC Annenberg / Brett Van Ort

When asked why diversity is important, Sarkissian said, “It’s such an integral part of what I do, it’s hard to say something specific about it. But we live in a constantly mediated culture, and it’s really important to look at how that culture’s being produced and who’s producing it.”

“Dominantly the more mainstream kind of media tends to be a little homogenous, and so it’s important to check ourselves in what we’re watching and how we’re watching it,” he said.

Manouchka Labouba, a rising fourth-year doctoral candidate in the USC School of Cinematic Arts from the small central-African country Gabon, agreed that there needs to be better representation.

“It comes with the sort of self-identification and self-perception. You need to see something that looks like you on TV, otherwise you feel like you don’t exist,” she said.

This kind of discourse between students is exactly what led Banet-Weiser to start a summer doctoral diversity institute last year. Banet-Weiser credits the USC Annenberg faculty and Dean Ernest J. Wilson III for creating a space for the study of difference in media, an area she said is underrepresented in the discipline of communication.

“I thought the first one was phenomenally successful,” Banet-Weiser said. “We wanted to build community with students so we can actually establish a network and a coalition of people who are doing this kind of really important work. And that did happen last year.” 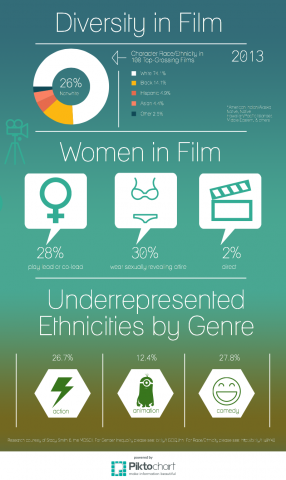 The 100 top-grossing films of 2013 gave speaking roles to nonwhite characters only 26 percent of the time. See full size.
Made by Arielle Samuelson; research courtesy of Stacy Smith

This year she co-directed the program with Kun.

“The Institute, this is our second year, is crucial because it deals with issues of diversity on a number of different levels. On the one hand it makes diversity and difference central to the school’s mission,” Kun said.

He described the program as an incredible working environment for students to focus on issues of diversity, but said it also served as a safe haven for the kind of workshopping that isn’t possible at other universities.

“We really hope that the Annenberg Institute is an opportunity to focus on these issues in ways that might not be possible in other places,” Kun said. “We really try to encourage that people present in non-formal ways, just working through ideas...it’s a good chance for the faculty to interact with the students in a more kind of intimate and informal way.”

“We have a lot to learn from each other,” Hunt said. “I’ve learned a lot from the student presentations, and hopefully they’ve learned from the comments I’ve made.” Each of the faculty members gives presentations of their own work, and Hunt said they specifically talk about methodological failures and other research challenges.

“Because that’s part of being an academic; it’s kind of wrestling through the issues of data, issues of interpretation, issues of theory, and so I think the students learn from that discussion,” he said.

In addition to learning from faculty, the doctoral students at the Institute leaned on each other for support. Walking through knots of students during the evening welcome reception, the students’ passion for their subjects created a cacophony of conversations on racism, sexism, and the ways in which the diverse majority are left out of Hollywood’s reel.

“Honestly, I feel like I can learn something from everybody, when it comes to just their perspective. Because my work speaks about lived experiences and what it means to actually embody certain identities. I feel like every voice matters,” said first-year Ph.D. student Victoria Thomas, who studies at the University of Washington.

She shared that as a black woman from Georgia, moving to a city where less than 10 percent of the population is African-American felt like a jarring difference. After a year of doubt caused by being an outsider in her own institution, the inclusiveness of the Institute has refreshed Thomas’ certainty that the work she does is important.

“When you come to places like this, I’ve been here all day and I’ve never once felt like I didn’t belong. So I feel like these are spaces- especially in academia, especially when it comes to women of color- where we can feel like we belong somewhere and our work is important,” she said.

Sitting next to Thomas is Scarlett Hester, a third-year Ph.D. student at the University of Memphis. She’s presenting a paper on the Twitter storm labeling NFL player Richard Sherman a thug, after a heated post-game interview, as a way into examining the media’s perception of black masculinity. 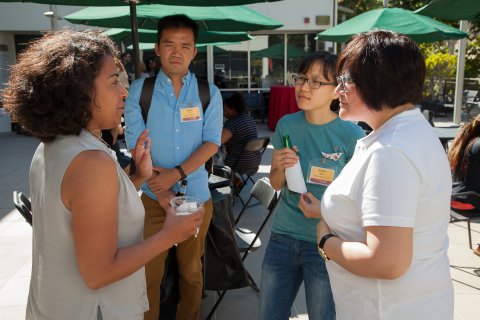 The 2015 Summer Institute for Diversity in Media and Culture doctoral candidates talk to each other at a reception after a long first day.
USC Annenberg / Brett Van Ort

As an Asian-American, she said, “It’s an important conversation you have to have. I want to study it so I can start those conversations with my students and maybe challenge the way that they think.”

The Institute covered a broad array of topics, including transgender representation on television, portrayals of disability, and diversity in the STEM field. But with the evening news peppered with videos of police brutality against black Americans, and South Carolina still reeling from the Emanuel African Methodist Episcopal Church shooting, conversation naturally turned to current events.

“My personal approach to academic scholarship is that it means nothing if it’s not open and in immediate dialogue with what’s happening beyond these doors. Obviously what happened last night is something that I’m guessing will be central to our talks today,” Kun said.

It’s difficult not to take the Summer Institute as an opportunity to ask the question- how far has America progressed in terms of equal rights for all?

“Like most things in society we progress in certain ways and we stagnate in other ways. Obviously in terms of race relations, 2015 America is not the same as 1955 America,” Hunt said, admitting that the situation is complex. “On the other hand we have all these issues with racial profiling, killing of young black men, in very public and visible ways.”

But the goal of the Institute isn’t to track how far representation has come.

“I understand why that is the question, whether we’ve made progress or not, but that’s actually not how culture works really,” Banet-Weiser said. “We move in many different directions in terms of how it is that both individuals and institutions respond to things like institutionalized racism and sexism,” she continued.

“Part of what we’re trying to do here is figure out some of those different avenues, and those ways of thinking through these issues, so we actually can change the social and cultural world.”