Sam Olstein: From solo magician to director of innovation at GE

It’s the first part of a new General Electric (GE) engagement initiative on the video live-streaming app Periscope. Olstein’s going to engineer a drone to carry an iPhone, filming aerial flyovers of five test sites and inviting viewers into the beating heart of GE technology from July 20-24. 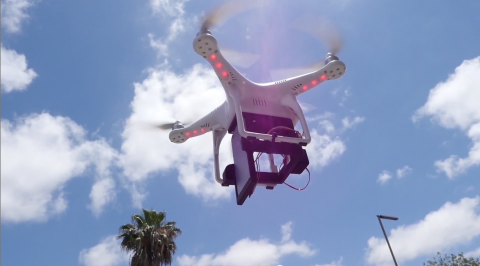 The GE drone featured in #DRONEWEEK, which shows live flyovers of five GE sites on Periscope from July 20-24.
Courtesy of GE.

Olstein, B.A. in Journalism ’06, is the director of innovation for GE. He’s the man behind GE’s new-age marketing campaigns, like Snapchat with Buzz Aldrin, the Emoji Table of Experiments with Bill Nye, and a barbecue research center with a 14-foot-web-connected brisket smoker that premiered at SXSW.

If he looks young, with his messy brown hair and his round face, that’s because he is. At 31 years old, Olstein’s been leading the charge on a communications revolution for one of the oldest and largest industrial companies in the world. Referencing what he calls “disruptive technology,” Olstein said his job is to keep a 123-year-old behemoth of a company on the forefront of emerging media and new social media platforms. In other words, connect with younger audiences, who associate GE with their grandparents or the lightbulb they just bought.

“As a company who’s been around for so long, people have their perception of what we’re about,” Olstein said.

Olstein and his team set about to change that, using the same social media apps as Millennials and featuring familiar faces in their campaigns. They’re betting that texting emoijs to Bill Nye the Science Guy, and watching him do experiments assisted by celebrities like Rosario Dawson, will resonate with the same age group they want to recruit.

GE needs developers; the same developers that want to work for Google, or Apple, or Facebook, Olstein said. So his job is to translate GE’s work in a simple, accessible way.

“I can understand how the industrial internet is going to make my barbecue taste better. I can understand what a hologram and the power of light is all about when Bill Nye explains it to me with emojis,” Olstein said. “So all of these things that we do in our marketing and in social media are messages meant to help us tell our story and connect with this next generation as we kind of evolve as a company.”

Where other companies’ failure at awkwardly adopting younger generation’s technology results in tone-deaf and painfully obvious marketing ploys, Olstein has a talent for making GE’s antics seem organic to the platform they’re on.

The key, he said, is the story-telling skills he learned by studying journalism at USC Annenberg. In his junior year he was assigned a reporter’s beat in Long Beach, where he was tasked with simplifying a complex story about the construction of a power plant in the harbor.

Olstein remembers the frustration he felt trying to shape the story into a series.

“I don’t even think I got a good grade in the class. It was really challenging,” he said. “And I look back on that time, and I think that’s just one of those experiences that pays off so much in the long run.”

Olstein said he uses his USC Annenberg skill set every day in his work.

“I always come back to just keeping it simple,” Olstein said. “Journalists have to tell stories in such a short period of time, and cover a lot of information.”

His hard work is paying off. In December of last year, Olstein and his GE team won Digiday’s Best Innovation in Publishing award for their work with Mic on neuroscience. Olstein’s trajectory for GE jives well with Mic, a millennial news website that’s gained both credibility and a Goliath-size social media presence.

Mic partnered with GE on BrainMic, which includes content like a personality quiz that compares the user’s brain to historical figures’, the science behind dogs’ love for their owners, and how altitude might contribute to Utah’s comparatively high suicide rate. The quiz features a discreet GE logo when a mouse hovers over the headline, but the written work contains no mention of GE, which supplied their neuroscience research to Mic. 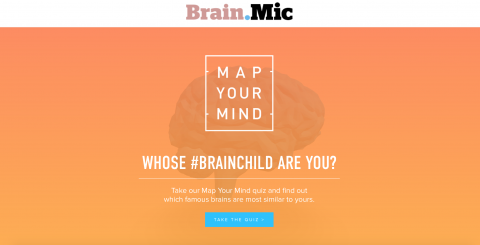 The 'Map Your Mind' quiz is an award-winning collaboration between Mic and GE.
Olstein called it native advertising, but admitted that without the GE attribution, he wasn’t sure what to name it.

“We gave [Mic] access and really tried to get to the center of what they wanted to talk about journalistically with this new section of brain science, and the stuff that we already do as a company,” Olstein said. “So it was totally new territory, and I don’t even know if there’s an industry term yet that appropriately defines it.”

The origin story of this industrial New York wunderkind, running the social media account of a $150-billion-dollar business, begins in Minnesota. Olstein grew-up in a well-mannered Midwest town, the kind where people would have once tipped their hats to one another on the street. And it’s his Midwestern sensibility that may be the key to Olsterin’s success.

When asked if he had any childhood talents that might have led to his quick climb up the ladder, Olstein demurs. “My parents would probably list off all the things I did as a kid. Like I was a solo magician for a while,” he recalled. Try to pin down his individual accomplishments and Olstein repeatedly credits the team of people around him, calling himself lucky. It’s a touching humility almost entirely at odds with the city and industry Olstein works in. “You have to be true to who you are,” Olstein said.

His emphasis on relationship-building over ego served Olstein well when by happenstance he was seated on a plane next to his future boss at GE.

“I think I popped up on her radar for the right reason at that time,” Olstein said. “And it’s just there are moments where doors open, and you have to be conscious of when that door opens and be confident enough to walk through it.”

Olstein carries a clear-eyed optimism about the future, believing that doors are wide open for young people just graduating.

“I think youth is such an asset today. It for a very long time was seen as a hurdle … but in the world that we live in today, if you’re working in digital media, that is your best asset,” Olstein said.

“Your youth is something that no one else who’s maybe has more experience, who’s been in the workforce longer, can compete with you on. And the people who are graduating Annenberg today have a leg up on people like me,” Olstein continued. He said that by growing up with the same technologies GE is trying to harness, younger generations have an advantage.

“I think the power is shifting,” Olstein said. “I mean Snapchat is one of the most influential media companies today. And it’s run by a 24 year old.” That’s why, Olstein said, big companies will have to embrace youth in leadership positions, or fold in a future populated by bright young stars.

“I love USC. The Trojan family is real. When I started, I’d heard all about it, and I was like, ‘Oh that’s cool. When I’m an alumni, I’d like to be in that family.’ But it’s actually the real deal,” Olstein said, “I owe so much to Annenberg and to the school."