Week in and week out this past spring, students in clinical professor of communication Christopher Smith’s COMM 400 class, "TV Strategy: from Broadcasting to YouTube," wrestled with a basic question: Does Twitter success a TV hit make?

Five groups of students from Smith’s class were assigned to research and analyze four NBC shows: “Saturday Night Live,” “Law & Order: SVU,” “The Voice,” “Blindspot.  “The Walking Dead," the group's one non-NBC show, was included because it’s a popular, intensely social and brand integrated show on the AMC channel.

With access provided by NBC executives, the students spent the semester looking at data from the network’s Nielsen Social TV analytics tool in hopes of teasing out linkages between the social conversations about a given show and brands, and then considering how might NBC leverage those linkages for the purposes of marketing, programming, or ad sales. On April 29, the groups presented their findings to NBC executives.

Smith said in the past, television was watched by appointment. Now, networks are trying to capture delayed viewing on DVRs and other platforms, and monetize it.

“This project will feed into NBC's programing, marketing and their ad sales strategy,” Smith said.

It was the first time Smith included a project like this in his class. Kimberlie Stephens, clinical assistant professor in communication, also provided guidance to the students. 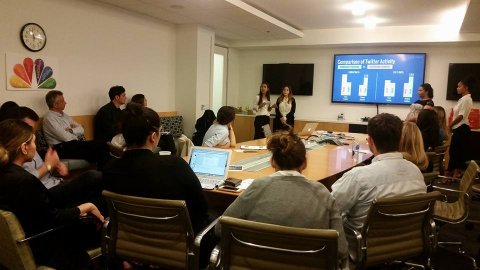 Students from Professor Chris Smith's class present their data for their projects to NBC execs on April 29.
Photo courtesy of Chris Smith
The project, with its combination of hands-on learning and real-world business impact, is one Smith hopes to embed within the Media, Economics & Entrepreneurship (M{2e}) program overall, of which he is a co-director. M{2e} is an interdisciplinary academic program focusing on evolving business models for communication and journalism.

“We think that industry collaboration/exposure will be a key aspect of the value that students draw from the M{2e} program,” Smith said. “The opportunities for experiential learning that we can create with key external stakeholders in private industry are boundless. This NBC social listening project is our first big step in that direction, and yes, we certainly intend on creating more opportunities like this in the years to come.”

During the presentations on the Universal City lot on April 29, the groups explained how some shows didn’t have as much Twitter chatter while other presentations found people used their iPhones to engage in social media chatter as they watched shows like SNL.

Jamie Edge, (BA Communications ‘16), analyzed “The Voice” with fellow students Alana Essig and Christina Lo. She said they used the Nielsen social data to look at relationships between shows and brands over entire seasons, but also broke things down week by week to find consistencies and inconsistencies.

One of the data points they looked at is the brand affinity index, which correlates the number of people who tweeted about the show and also tweeted about a brand within a specific time frame, Edge explained.

Through the project, Edge and her group got a clear picture not just of what brands fans feel strongest about, but also what the show’s Twitter audience looked like overall.

“So instead of guessing based on basic demographics, like age and sex, you can get a much more intimate picture of what your audience looks like and by proxy you can have much more targeted advertising, which means you can charge more for it,” Edge said. “This is an excellent opportunity to monetize advertising in a way that has never been done in this industry because social media has just blossomed.”

For Autumn Battani, (BA Communications and Social Sciences ‘16), the project was proof of the “Annenberg Advantage,” where USC Annenberg does a great job making sure its students have a holistic education. Battani was part of the “Law and Order: SVU” group with Solene Manoukian, Diamonte Harper, and Rafaella Rique.

“They want you to be as prepared as possible,” Battani said. “I feel like I definitely learned and you need to apply that into a workplace. Having something like this--you’re elbows deep in information and getting real feedback--it’ll definitely be helpful for all of us who are graduating and go on to jobs.”

Battani said she didn’t think the project was going to be as hard as it turned out to be. For example, one night, her group, spent seven hours in the library doing research and going over numbers. She said the group didn’t realize how many times they would go back to the drawing board.

“It was keep going until we get it right,” Battani recalled.

Jared Goldsmith, SVP, Marketing Strategy & Digital, who sat in on the presentations, said projects like this help pair the right audience with the right brand, as well as with the right websites.

“As a marketing organization, we’ve been built to drive people to show up at a certain day and certain time. But the truth is the majority of people are not watching shows that way,” Goldsmith said. “Lots of good thinking today.”

The students ended up learning invaluable lessons from the project, Smith said.

“They learned to deal with uncertainty and to keep going until they were surprised by what they found. This is real research in that you don’t know what you’re going to find,” Smith said. “Normally in a class like this, you talk about the problems inherent to TV metrics but to actually use a TV metrics platform all semester, you get a much richer understanding as to what the blindspots of those metrics are.”

Stephens, who helped mentor the students through the semester, said they quickly learned that the answers aren’t prescribed and that the data isn’t neat and clean. Being a data person, Stephens said she hoped that students realized the fun and power of data-driven analysis and decision making.

“They have to use critical thinking to sort through the meaning of data and decide what to pay attention to,” Stephens said.

The idea behind the project was hatched last year when an M{2e} advisory board member Jeff Bader, who is also President, Program Strategy & Research at NBCUniversal, told Smith how social media was creating a big data problem for the network. Bader (MA Communication Management '86) also provided guidance to students throughout the semester, along with Benoit Landry, (MA Communication Management '05) Senior Director, Program Research at NBCUniversal.

Bader, said the experience provided NBC with “fresh eyes,” which were greatly appreciated. He said there are so many different platforms to watch television, that it was good to tap into a group who’s watching NBC shows differently.

Landry, echoed what Bader said, saying on the research side, getting feedback from young people was invaluable.

“It’s people who have not been at all tainted, they don't have blinders on because they're used to looking things in a very specific way,” Bader said.