For the last two years, NBCUniversal and the National Association of Black Journalists (NABJ) have teamed up for a summer fellowship program. And this year, USC Annenberg’s own Kay Angrum was selected to participate.

During her interview for the program, the senior broadcast and digital journalism major was asked which NBCUniversal show she’d prefer to work for, to which she immediately replied: the “Today Show.”

The native New Yorker grew up a fan of the show, and having spent the last few summers in LA — working at KTLA, CNBC, E! News and CNN — Angrum wanted to be closer to home this year.

She was also looking for something that would reconcile her desire to cover entertainment and hard news. So, the “Today Show” was the obvious choice for her.

The 10-week fellowship has allowed Angrum to work with the “Today Show” production department, with rotated shifts each week.

“What's great about having a rotating schedule — and news, in general — is that every day is different,” Angrum said. “One day I'll be inside the control room running scripts from floor to floor and the next day I'll be out on the plaza interacting with fans to answer their questions and get them excited at the start of each live hit.”

Angrum has manned the front desk to answer questions from viewers, booked show guests, worked on shoots in the field and pitched and written stories for the show and website. The “hands-on” nature of the fellowship has allowed her to get to know and work with numerous producers, cameramen, pages and other members of the team.

She added that the experiences she’s had have reaffirmed her goal to work as a reporter or anchor for a morning news show.

“People are waking up in the morning across the country and many of them wake up to ‘Today,’” she said. “There's something about being welcomed into a person's home that early to tell them what they want to hear or need to know that gets me excited to pursue this career.”

In working with the “Today Show” team, Angrum said she has “acquired new skills and sharpened old ones.” She’s also been witness to the importance of “performance and communication,” which she intends to implement in her work at USC Annenberg.

“Seeing how well the producers, crews and [executives] communicate reminded me just how important that is to make great content readers want to watch,” she said.

But, the “Today Show” wasn’t the only place Angrum managed to pick up new skills this summer. 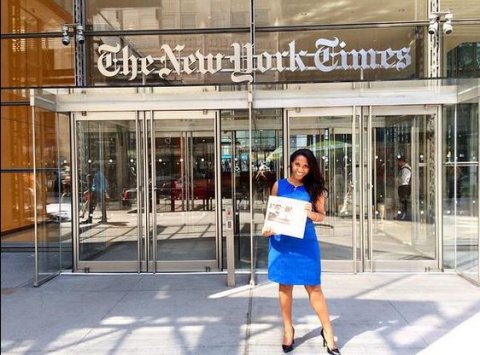 Photo Courtesy of Kay Angrum
As the incoming director of multimedia for the Daily Trojan, Angrum was eager to learn more about the digital and audience engagement side of newspapers. So she sought out USC alumna Laurie Kawakami, who worked at the Daily Trojan and is now a Social Strategy Editor for the New York Times.

“I reached out to [Kawakami] on Twitter via a tweet asking to pick her brain about what they do at the Times,” Angrum recalled. Kawakami responded immediately, offering to sit down with Angrum, and give her a tour of the New York Times building.

Angrum said that her combined experiences in New York — “a major city and a top news market” — this summer have “equipped [her] with the tools necessary to think about news and reporting in a bigger way.”

Although she calls New York home, Angrum said every trip back still feels like the first time. “The city is huge and there are always new places to explore and new people to meet,” she said.