Professor emeritus Arthur John Langguth, a world-class reporter, author and educator, passed away on Monday. He was 81.

The following is a personal reflection by Joe Saltzman on the incredible life of "Jack" Langguth. 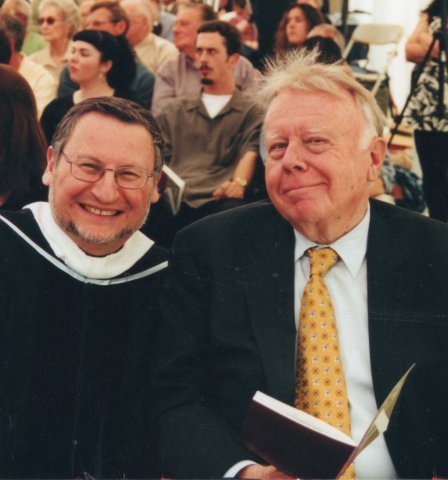 Jack was one of my closest and dearest friends. When we first met in September 1962 at the Valley Times Today, we used to spend hours on the phone talking, debating, arguing about everything from politics to personal matters. In later years, especially after he retired from USC more than a decade ago, we traded e-mails on a daily basis and up to the night of his death, I was still filing a report of what was going on at USC, in the Saltzman household, about things in general, something he expected on a nightly basis.

He was one of the most extraordinary human beings I have ever met. He had what I am sure was a photographic mind because he remembered everything in great detail. He knew more about me than I did and would constantly bring up embarrassing events that happened in my life even if they were 30 or 40 years old, recalled in perfect detail.

He was a marvelous writer and reporter. His book on Vietnam, which includes the only interviews even then with the Vietnamese and Chinese generals and soldiers who won the war, is a classic never to be repeated. His history books read like novels — he wrote about history as if he were standing in a particular moment in time, observing events just as they happened. Anyone who has read Patriots, his first book on American history never forgets his telling of the War for Independence. It is living history written by a perceptive and knowledgeable reporter.

Jack didn’t care much about university life, but loved teaching and he loved his students and his students cherished him. I remember in 1976 when we were sitting in the old USC Grill and I asked him if he would be interested in teaching at USC — believing that would be the last thing he would ever do. He said he would, and in my excitement, I promptly spilled my drink all over him. He said later teaching was a godsend because it enabled him the money and time to write his books.

For the next several decades, our offices were adjacent — first in the Grace Ford Salvatori Hall and later in the USC Annenberg building. When Jack left USC, he gave me a giant photograph shot when he won the Teacher of the Year Award from AEJMC. It still sits in my office and everyone swears when you move about the room, his eyes follow you.

We both shared a love for Norman Corwin. For more than 20 years, Jack would host a small birthday party for Norman every year and then interview him on his life and times. They were wonderful parties. When Norman was having trouble putting together his letters for publication, he asked Jack, who was busy on his latest book, to help him. Jack dropped everything to edit the letters for publication and his brief biographical statements introducing each letter turn out to be the best things ever written about Norman, who was eternally grateful to Jack for taking on what he called “an odious task.”

Jack was the kindest man I know when it came to anyone who asked his help. He was mentor to dozens of young writers — looking over their work, making razor-sharp suggestions for improvement, helping them get a publisher or an agent. And he was as loyal a friend as anyone could ever have.

He made me a better person and a better writer and his enthusiasm for my research project‒ the Image of the Journalist in Popular Culture — knew no bounds. He was my biggest fan, my biggest critic, my greatest friend and I will miss him more than I can say.

Jack forever chided me that Barbara and I never invited him to our wedding — even though we hadn’t met him until three months after the wedding. He was there for me when our son David died, when my parents died, when everything of importance (or unimportance) happened to me, always there when I needed him.

Early in our friendship he had convinced me that he could foretell the future. I had a great fear of flying and he said he would warn me if the plane was in jeopardy before I boarded it. So every time I went on a trip, I would call him or e-mail him and he would reassure me that all would be well. He even predicted a bumpy flight but a safe landing and he was right on the mark. He also told me once that I would die the day after he did, but rescinded that prediction several years ago when he became ill.

I cherish Jack’s extended family who were with him in his last months of need — especially Sue Horton, Chas Fleming, Joe Domanick, Angel. They made his last days as comfortable and peaceful as possible. He wrote me a final e-mail: “All fine on Whitley.” He then thanked his caretakers: “With my undying gratitude. (Small joke.).”

He was very excited about his new book, After Lincoln, which comes out this month. Usually before one of his books was published, Jack never talked much about it. But this time, he not only continually sent me things he had written, but he wrote that he really thought this was a good book.

I can hardly wait to read it. In the past, I would write Jack copious e-mails describing my reactions to each chapter as I read it. I’m going to miss doing that this time around.

He once told me when a cherished friend of his died that life went on but it was as if several colors of the rainbow had disappeared forever. Jack took more than a rainbow from us. For me, his death is a long shadow that obliterates the universe in which I live. He knew me better than I knew myself and a piece of me died with him.

I will, of course, remember his wit, his intellect, his humor, his love of gossip, his loyalty to friends, his love of reading, his joy in writing, his generosity to students and young writers, and his “children,” the books he left us that will live as long as books exist.