Fake News & The Image of the Journalist in Pop Culture Video

The Conversation: Do Journalists Get a Bad Rap in Pop Culture? Video

The Scoop: Journalism in Movies -- a 13-minute documentary on the image of the journalist in films.

"It Can't Happen Here -- And then it did." The Conversation 2020 and published in periodicals around the world, June, 2020. For almost a century, popular culture has perpetuated the notion that only journalists working in foreign countries were in danger. But now images of American  journalists reporting in United States being attacked, arrested and imprisoned happened during the 2020 protest marches. 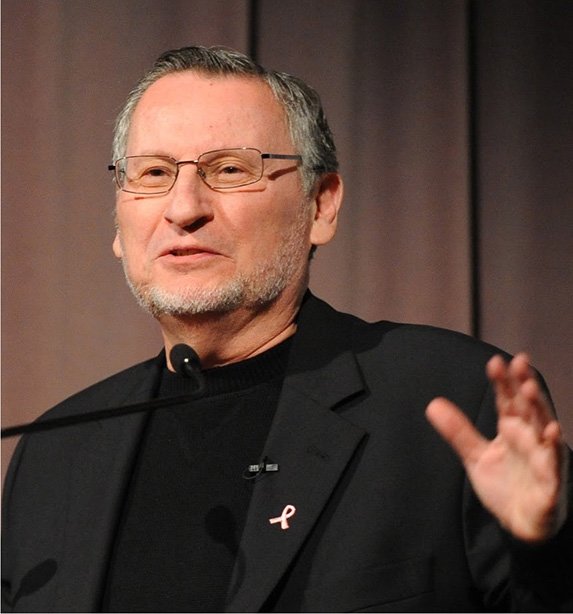 Saltzman received his B.A. in journalism from the University of Southern California and his M.S. from the Columbia University Graduate School of Journalism. After working for several years as a newspaper reporter and editor, Saltzman joined CBS television in Los Angeles in 1964 ending up as the senior CBS producer for the five owned-and-operated CBS stations. For the next ten years, produced documentaries, news magazine shows, and daily news shows, winning more than fifty awards including the Columbia University-duPont broadcast journalism award (the broadcasting equivalent of the Pulitzer Prize), four Emmys, four Golden Mikes, two Edward R. Murrow Awards, a Silver Gavel, and one of the first NAACP Image awards.

Saltzman was among the first broadcast documentarians to produce, write and report on important social issues, including Black on Black, a historic ninety-minute program with no written narration on what it is like to be an African-American in urban America in 1967, acknowledged to be the first documentary of its kind on television; Rape, a 30-minute 1970 program on the crime, the first documentary on the subject for television, which resulted in changes in California law and received the highest rating for a documentary in Los Angeles history; The Unhappy Hunting Ground, a 90-minute documentary on the urbanization of Native Americans, one of the few documentaries ever made on the subject; The Very Personal Death of Elizabeth Holt-Hartford, a 30-minute program on what is like to get old in America, The Junior High School (Part One, “Heaven Hell or Purgatory” and Part Two, “From ‘A’ to Zoo”), a two-hour program on education in America in 1970, said by one critic to be the “best documentary ever made on education in America”; and Why Me? acknowledged to be the first documentary on breast cancer in 1974 that resulted in thousands of lives being saved and advocated changes in the treatment of breast cancer in America. All are available on Youtube by clicking the titles.  DVDs or Mp4 copies of the Saltzman documentaries are now available. He was also producer of one of the first news magazines on television, Ralph Story's Los Angeles.

In 1974, he created the broadcasting sequence in the USC School of Journalism. During his tenure at USC, Saltzman, who has won three teaching awards, has remained an active journalist producing medical documentaries, functioning as a senior investigative producer for Entertainment Tonight, and writing articles, reviews, columns and opinion pieces for hundreds of magazines and newspapers. He has been researching the image of the journalist in popular culture for nearly two decades years and is considered a worldwide expert in the field.

The image of the journalist in popular culture is a gold mine of research possibilities. The Image of the Journalist in Popular Culture (IJPC), a project of the Norman Lear Center in the Annenberg School for Communication and Journalism at the University of Southern California, was created in 2000 to investigate and analyze, through research and publication, the conflicting images of the journalist in film, television, radio, fiction (novels, short stories, plays poems), cartoons, comic strips, comic books, commercials and other forms of popular culture to demonstrate their impact on the public’s perception of journalists (www.ijpc.org).

Saltzman pioneered this long-neglected, new field of research rich with untapped material. To help those who want to work in this academic field, the Image of the Journalist in Popular Culture Project has created three major resources: The IJPC Website (www.ijpc.org), the online IJPC Database with more than 89,000 entries, and the peer-review The IJPC Journal, all worldwide sources for the subject. He has been researching the image of the journalist in popular culture for twenty years and is considered one of the leading experts in the field. Saltzman is co-founding editor of the peer-review The IJPC Journal and creator of the IJPC website and the IJPC Database.

Saltzman received the 2017 Outstanding Service Award from the USC Association of Trojan Leagues, an honor given to one outstanding USC professor each year. Saltzman is the 21st recipient of the award and one of the few to be chosen unanimously. 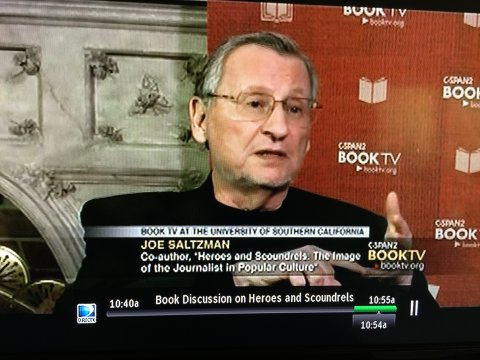 Book discussion on Heroes and Scoundrels: The Image of the Journalist in Popular Culture by Matthew C. Ehrlich and Joe Saltzman. Professor Joe Saltzman talked about the way journalists are portrayed in popular culture. This interview, recorded at the University of Southern California, is part of Book TV’s college series. It aired on Sunday, May 24 at 10:40 pm.

For a conversation with Saltzman conducted by Norman Corwin, click here.

Annenberg Research Seminar: The Image of the Gay Journalist in Popular Culture

The Leonard Lopate Show: Projections: Journalism on Film. We take a look at how journalism and reporters have been depicted on film over the decades with Professor Joe Saltzman, director of the Image of the Journalist in Popular Culture Project

Frank Capra and the Image of the Journalist in American Film, by Joe Saltzman, professor of journalism and communication at USC Annenberg. Publication date: 2000. Norman Lear Press.

Research Report: The Image of the Journalist in Silent Film,1890 to 1929 by Joe Saltzman.

Analyzing the Images of the Journalist in Popular Culture: A Unique Method of Studying the Public's Perception of Its Journalists and the News Media: “A long-neglected, fertile field for research virtually untapped by journalism and mass communication scholars” by Joe Saltzman, Professor of Journalism, Director of the Image of the Journalist in Popular Culture (IJPC), A Project of the Norman Lear Center, Annenberg School for Communication, University of Southern California. By analyzing the images of the journalist in popular culture over the centuries, the researcher can offer a new perspective on the history of journalism as well as the delicate relationship between the public and its news media. The anger and lack of confidence most of the public has in the news media today is partly based on real-life examples they have seen and heard, but much of the image of the journalist is based on images burned into the public memory from movies, TV and fiction. These images of the journalist have an enormous influence on how the public perceives and judges the news media and they have a profound effect on public opinion and consequently, the public’s support of the effectiveness and freedom of the news media. Many of these images come from age-old sources, long forgotten yet still relevant in the 21st century. Variations of this paper were delivered at the “Media History and History in the Media” conference at the University of Wales, March 31-April 1, 2005 at Gregynog, Wales, and at the Association for Education for Journalism and Mass Communications (AEJMC) in San Antonio, Texas, August 12, 2005.

Video Compilations for research and classroom use only:
(DVDs or mp4 files available upon request -- see ijpc.org)

Journalism Ethics Goes to the Movies, a one-hour-and-50 minute video compilation for IJPC Associates members created to supplement the book edited by Howard Good.(Rowman & Littlefield, Lanham, MD, 2008). Good is a professor of journalism at SUNY New Paltz. He was a pioneering author of a series of books on the image of the journalist in films and novels including Outcasts: The Image of Journalists in Contemporary Films; Girl Reporter: Gender, Journalism, and the Movies; The Drunken Journalist: The Biography of a Film Stereotype, and Acquainted With the Night: The Image of Journalists in American Fiction, 1890 –1930. He’s also written books on media ethics and public education. The IJPC Video follows Journalism Ethics Goes to the Movies chapter by chapter. The book’s 12 chapters explore issues that should concern anyone who aspires to a career in journalism, works in journalism or relies on journalism for daily information. The contributors do their exploring at the movies where sportswriters, war correspondents, investigative reporters, crime reporters, spin-doctors, TV anchors and harried city editors jostle for attention. 2007.

Sob Sisters: The Image of the Female Journalist, 1929-2007, a revised and updated two-hour-and-41 minute video compilation with more than 136 movie and television clips documenting the history of the female journalist in film and television in the 20th and 21st centuries. 2004.

Hollywood Looks at the News, 1914-2007, a one hour-and-49-minute video compilation with 165 movie and television clips documenting the history of journalists in film and television in the 20th and 21st century. 2003. Revised 2007.

The Jester & Pharley Phund (http://www.thejester.org)
A non-profit charity. It's mission is giving children joy, laughter, the love of learning and a way to live up to the motto of the classic children's book, "The Jester Has Lost His Jingle" - "It's up to us to make a difference. It's up to us to care."
"The Jester Has Lost His Jingle" - Los Angeles Times Festival of Books 2015 at USC
Storybook Mom Final Promo and Segment - CBS Sunday Morning 2015
Barbara Saltzman The Jester's Mom - ABC Good Morning America 1995.  Also other news coverage of "The Jester's Mom."
The 20th anniversary Newsletter celebrating two decades of The Jester & Pharley Phund 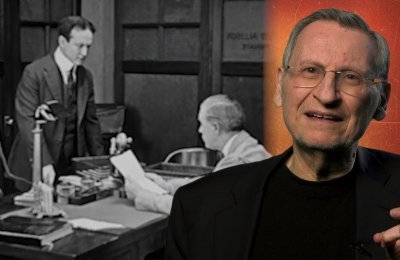