Members of the White House communications team are traditionally the most prominent public relations professionals in the world. As the most visible figures in American and global media, they are a key voice for advancing presidential policies and priorities that impact not only Americans, but citizens around the world. Under the current administration, they are also impacting something else – their own profession. 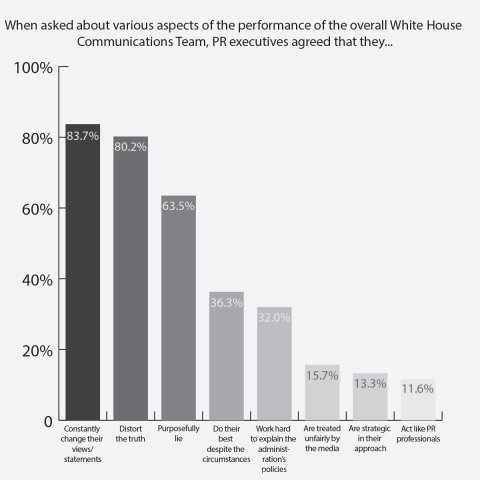 USC Center for Public Relations
A survey of public relations professionals conducted by the USC Center for Public Relations at the Annenberg School for Communication and Journalism found that 73.2% of respondents across the political spectrum believe the current White House communications team is impacting the public perception of the PR industry.

When asked about various aspects of the perceived performance of the overall White House communications team:

“It’s clear from the results of our survey that the PR industry would prefer to distance itself from the current White House communications team, whose practices are not reflective of the values of the broader industry,” said Fred Cook, director of USC Annenberg’s Center for Public Relations. “The vast majority of PR professionals believe that honest, open communication leads to constructive dialogue and shared understanding, both of which are in short supply these days.” 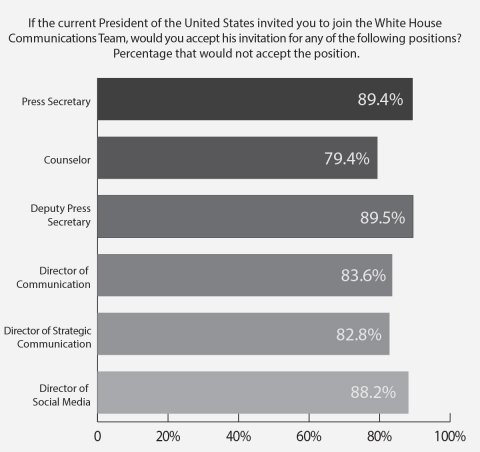 USC Center for Public Relations
A majority of PR practitioners believe that Counselor Kellyanne Conway, Press Secretary Sean Spicer and Deputy Press Secretary Sarah Huckabee Sanders have made a negative impact on the perception of their profession. Ninety percent of respondents believe that Conway’s impact has been negative, with 78% describing her effect as “very” negative. Ninety percent also state that Spicer has a negative impact, with 59.4% describing it as “very” negative. Huckabee Sanders’ effect was described as negative by 56.5%.

“It’s always difficult to evaluate an individual’s performance when you don’t really know what’s going on behind the scenes,” said Cook. “However, it’s obvious that the broader PR community is deeply concerned about the long-term consquences of the White House’s approach to communications.”

Many former White House spokespeople have gone on to secure high-profile positions in the public relations industry after their stints in politics — despite the challenges of being closely associated with the policies and practices of a particular president. While 36% of PR professionals agree that current White House communications team members do “their best under difficult circumstances,” the majority indicated they would not hire the current Press Secretary or Deputy Press Secretary in a PR-related job, if they were in a position to do so.

Recruiting professional replacements to fill spots on the White House communications team would also prove challenging. If asked by the current President, the overwhelming majority of PR practitioners said they would not accept jobs in the White House. Only 6% would accept the job of Press Secretary or Deputy Press Secretary. Only 7% would accept the job of Director of Social Media. Of the conservatives polled, 75% said they would not accept an invitation to become Press Secretary.

Data was collected from an online survey distributed to public relations professionals across the United States though email and social media channels between May 30 and June 8. The process resulted in a convenience sample of 902 qualified responses, representing all 50 states. Sixty-nine percent of the respondents were between the ages of 35 and 64. Fifty-one percent have 20+ years of experience in the communication field. Fifty percent work in public relations or communication agencies; 26% work in public and private corporations; and 16% work in government agencies or non-profit organizations. About 57% were female and 41% were male, with the remainder not identifying their gender.