Are cell phones appropriate during a meal, a meeting, or a class? Many Americans say no, reports the Center for the Digital Future and Bovitz, Inc.

New findings about behavior involving mobile devices confirm what frustrated parents, supervisors, and teachers already believed: many Americans say that using a cell phone – or even its presence – during a meal, a meeting, or in the classroom is not appropriate. 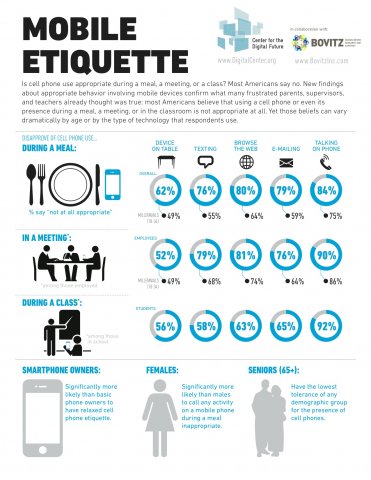 Yet those beliefs can vary dramatically by age or by the type of technology that respondents use, according to a national survey conducted by the USC Annenberg Center for the Digital Future in collaboration with market research and strategy firm Bovitz, Inc.

The ultimate no-no for meal-time cell phone etiquette? Talking on a mobile device during a meal, which is considered inappropriate by 84 percent of total respondents.

“We’re finding a whole new social etiquette developing about the appropriateness of mobile devices,” said Jeffrey Cole, director of the Center for the Digital Future at the USC Annenberg School for Communication and Journalism.

“Fifty years ago, no parent would tolerate a child answering the phone five times during a meal,” said Cole.  “Now parents face an updated version of that problem when confronting their children about the endless stream of texts they want to answer while the family is together for dinner.  And parents use mobile devices, too; it’s their struggle as well.

“Now at least we have evidence that a large percentage of Americans believes some behavior involving the mobile devices in our lives is not appropriate,” Cole said.  “Whether we do anything about it is a separate issue.”

Students were somewhat less harsh in their views of some behavior involving mobile devices in the classroom: 56 percent of students judged a mobile device on a table during class as inappropriate; also considered inappropriate during a class were using e-mail (65 percent), texting (58 percent), browsing the web (63 percent), or talking on the phone (92 percent).

The study also found that age and acceptance of technology affect how users feel about appropriate cell phone behavior, which may foreshadow a changing philosophy about how Americans accept mobile devices in group settings.

The survey found differing views on cell phone etiquette when examined by age, with younger respondents more tolerant of cell phones at a meal, during a meeting, and in class.

“We’re starting to see that tolerance of mobile devices is not just reserved for the young; the type of technology one uses makes a difference as well,” said Greg Bovitz, president of Bovitz Inc.  “Older users who own smartphones are more tolerant.”

Millennials: a different mindset about technology?

Perhaps the most significant difference in views found in the study was the disparity between how Millennials (born after 1982) and those over 30 perceive the appropriateness of cell phones in social settings.

Even more extreme -- 50 percent of Millennials think it is appropriate to text during a meal, compared to only 15 percent of those 30 and older.

“Millennials simply have different mindsets about the role of technology in their lives, and determining if that technology is appropriate in social situations,” said Bovitz.  “Their views are shifting perceptions of how personal technology is tolerated.”

Finding from the Digital Future Project

Findings on appropriate cell phone behavior will be reported in the center’s upcoming annual report on the impact of the Internet in America, which will be released in February 2013.

These questions were included in the center’s Topical Survey, a new supplement to the main Digital Future Project. Conducted in August 2012, the Topical Survey interviewed 989 Internet users from an online consumer panel, covering issues such as privacy, social media usage, use of technology at school, stress with technology, and social norms regarding the presence of technology in social settings.  The survey has a margin of error of +/- 3.1%.

The Center for the Digital Future

Bovitz is a design-driven research and strategy firm that seeks to go beyond answering business questions to drive innovation. Bovitz works with brands to find new ways to connect to customers with innovative products, services, packaging, and promotions that create demand, drive repeat business, and generate brand loyalty. Bovitz's approach reveals the context of the consumer experience and produces ways to improve it and profit from it (bovitzinc.com).