A new, landmark report released today reveals that if you want to work in Hollywood, being a straight, white male is practically part of the job description. [Download a .pdf of the report.]

The study from the Media, Diversity, & Social Change Initiative at USC Annenberg is the most comprehensive analysis of diversity in recent popular films ever conducted, bringing together data assessing gender, race/ethnicity and LGBT status in movies. The study reveals, for the first time, a complete picture of Hollywood’s indisputable bias against featuring females, people of color, and LGBT characters on screen. 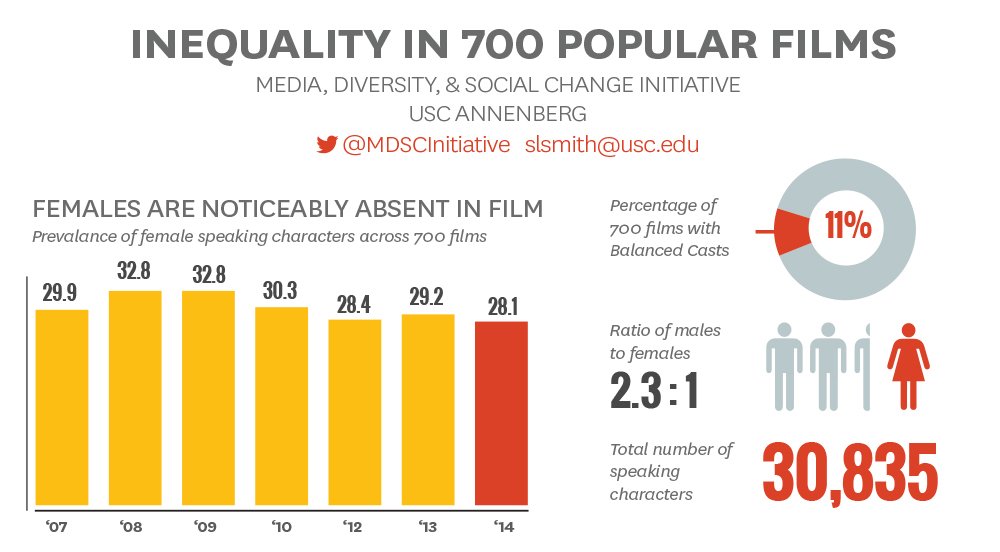 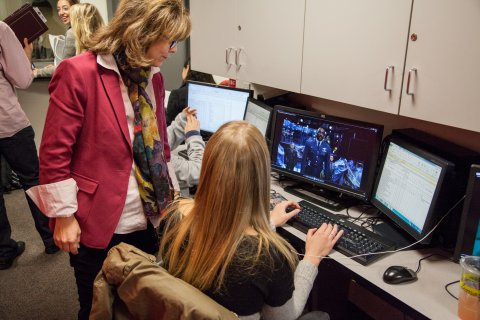 Professor Stacy Smith talks to a student at the Media, Diversity, & Social Change (MDSC) Initiative office.
USC Annenberg
“The picture that film presents is one that bears little resemblance to our nation’s demography,” said USC Annenberg Professor Stacy L. Smith, author of the study and founding director of the Initiative.

“By examining the trends over time, it is clear that no progress has been made either on screen or behind the camera when it comes to representing reality. This report reflects a dismal record of diversity for not just one group, but for females, people of color and the LGBT community.”

“For activists and advocates who want to see more women on screen, this age bracket is an important place to begin,” said Professor Smith. “Women of all ages can be the focus of creative and compelling storytelling. Programs like The Writers Lab, supported by Meryl Streep, are necessary to increase the presence of powerful women over 40 behind the camera and also in front of it.”

For those concerned with the sexualization of younger characters, the report reveals that females age 13-20 and 21-39 are equally likely to be depicted in sexually revealing attire or with some exposed skin.

In addition, the study found bad news for women behind the scenes.

“Across all 100 films in 2014 there are still movies that feature no Black/African American or Asian characters,” said Professor Smith.  “There were 17 films with no Black or African-American characters and over 40 movies featured no Asian characters. Hollywood continues to marginalize or exclude certain members of society.”

“Our findings demonstrate that women appear very infrequently behind the camera, but women of color are nearly invisible,” said researcher Katherine Pieper, one of the study’s authors.

The researchers examined diversity on multiple fronts, including an analysis of LGBT characters for the first time this year. Out of 4,610 speaking or named characters across the 100 top grossing films of 2014, only 19 were coded as lesbian, gay, or bisexual. Of the 19 characters, the majority were gay, white men.

“Instead of acting as a leader, film lags behind when it comes to representing this community,” said Marc Choueiti, the second author of the report.

“At a time when Jill Soloway is lauded for her storytelling prowess on Transparent and Caitlyn Jenner for her courage, film has a long road to traverse before it represents the diversity we see in TV and digital platforms, and in our communities,” said Professor Smith. “While ‘love wins’ in our nation, it loses in film.”

A full description of the results and methodology of the study, including findings related to film genre, can be found in the report: annenberg.usc.edu/MDSCI

This study is the most recent from the MDSC Initiative, which releases yearly in-depth analyses of the prevalence and portrayal of gender and race/ethnicity in film.  More than 65 students at the University of Southern California’s Annenberg School for Communication and Journalism worked on the study, which was conducted with the assistance of The Harnisch Foundation and other supporters of the MDSC Initiative.  For more information on the Initiative, or to read previous studies, visit annenberg.usc.edu/MDSCI.

·       Examining patterns of sexualization by age in 2014 revealed that female teens (13-20 year olds) were just as likely to be sexualized as young adult females (21-39 year olds). Middle-aged females (40-64 year olds) were less likely than these two groups to be objectified.

Graphic by Patricia Lapadula
·       Twenty-eight women have worked as directors across the 700 top films from 2007 to 2014. Only three were African American.

·       Only 19 Asian directors worked across the 700 top-grossing films. This is an overall percentage of 2.4%. Only 1 Asian director was female across the films analyzed and was listed as a co-director. 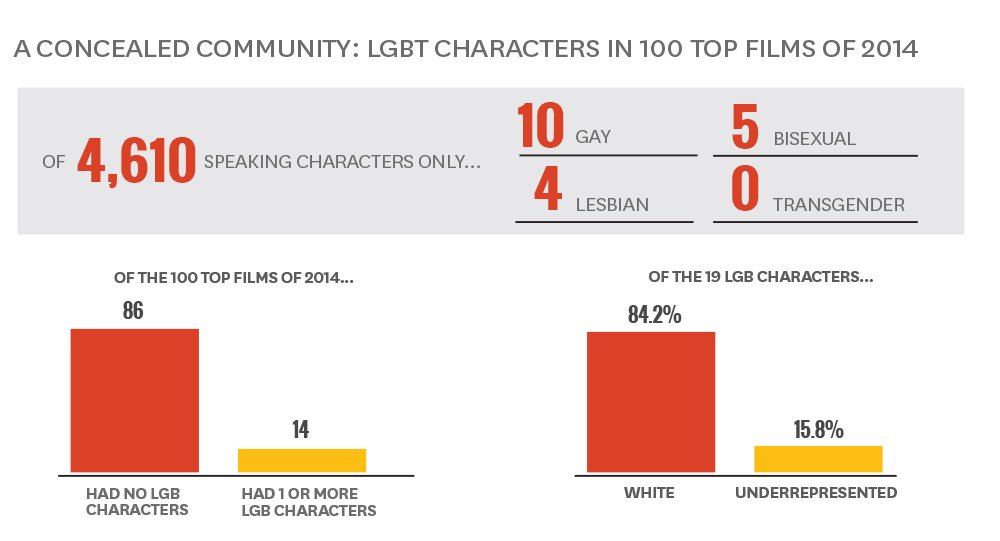 Graphic by Patricia Lapadula
·       Ten characters were coded as Gay, 4 were Lesbian, and 5 were Bisexual. Only 14 movies sample wide featured an LGB depiction and none of those films were animated.

New Study: Aging Americans Snubbed in Best Picture Films
Five Minutes with Bill Celis: On embracing diversity initiatives and his new role at USC Annenberg
It Doesn’t Get Better: No change for female, black, or Asian film directors in a decade