Though the conversation on inequality in Hollywood is now at peak volume, a new report reveals that little has changed on screen or behind the camera.

Authored by Professor Stacy L. Smith and the Media, Diversity & Social Change (MDSC) Initiative at USC’s Annenberg School for Communication and Journalism, the study is the largest intersectional analysis of characters in motion picture content to date. The group examined the 800 top films from 2007 to 2015 (excluding 2011), analyzing 35,205 characters for gender, race/ethnicity, LGBT status and – for the first time – the presence of disability. The results reveal that Hollywood remains impervious to change. 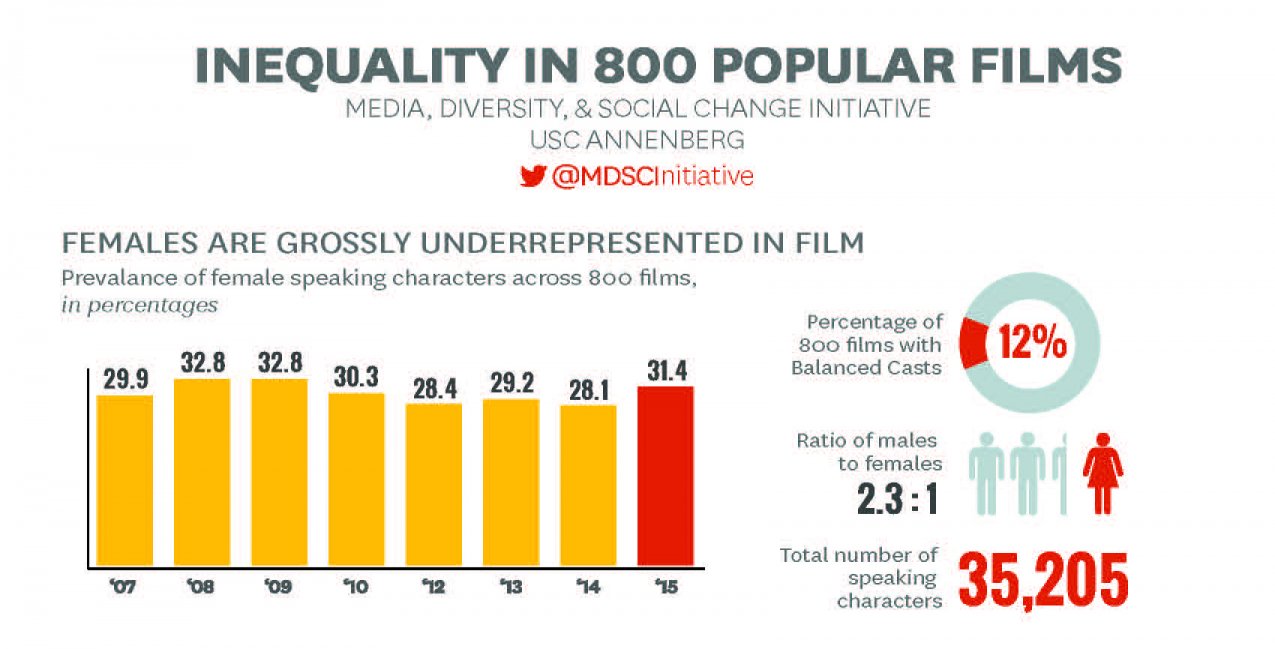 “The findings reveal that Hollywood is an epicenter of cultural inequality,” said Dr. Stacy L. Smith, Founding Director of the MDSC Initiative. “While the voices calling for change have escalated in number and volume, there is little evidence that this has transformed the movies that we see and the people hired to create them. Our reports demonstrate that the problems are pervasive and systemic.”

The research exposes the depth and breadth of exclusion. Of the top 100 films of 2015, 49 films included no speaking or named Asian or Asian-American characters and 17 featured no Black/African American characters. Similarly, 45 films did not include a character with a disability and 82 did not feature a lesbian, gay, bisexual or transgender character.

One bright spot was an 11% increase in female lead or co-lead characters from 2014 to 2015. Even there, however, only 3 of the films featured a female lead or co-lead actor from an underrepresented racial/ethnic group. Not one of the males or females in leading roles was Asian, echoing the concerns expressed by prominent Asian and Asian-American actors and others in that community.

The report illuminates why these inequalities may exist by coupling new data on 2015 films with evidence from the group’s previous reports, reaching back to 2007. Behind the camera, female directors were just 4.1% of those hired on the 800 films evaluated. Women of color were almost absent from these ranks, with just 3 Black or African-American females and 1 Asian female in the director’s chair. Overall, directors from underrepresented racial groups fared poorly. Only 5.5% of the 886 directors examined were Black or African American and 2.8% were Asian or Asian American.

“Despite the advocacy surrounding female directors, film is a representational wasteland for women of color in this key role,” said Dr. Smith. “Advocates need to ensure that their work reflects the barriers facing all women, not just a select few.”

“This is a new low for gender inequality,” said Dr. Smith. “The small number of portrayals of disability is concerning, as is the fact that they do not depict the diversity within this community.”

The report provides multiple solutions to addressing what Dr. Smith has previously referred to as the “inclusion crisis” facing Hollywood. These include simple strategies for reaching gender equality on screen within a short time frame—just three years. Other solutions invite prominent Hollywood figures to tackle the problem contractually and encourage institutions to set transparent inclusion goals for achieving change.

“Raised voices and calls for change are important, but so are practical and strategic solutions based on research,” said Dr. Katherine Pieper, one of the study’s co-authors. “The momentum created by activism needs to be matched with realistic tactics for creating change.”

The report is the latest from the Media, Diversity, & Social Change Initiative.

About USC Annenberg Media, Diversity, & Social Change Initiative
The Media Diversity & Social Change Initiative (MDSCI) at USC's Annenberg School for Communication and Journalism is a leading think tank studying diversity in entertainment through original and sponsored research. MDSCI findings create valuable and sought after research based solutions that advance equality in entertainment. Dr. Stacy L. Smith is the Founder and Director of the MDSCI.  Dr. Smith and the MDSCI examine gender, race/ethnicity, LGBT, and disability on screen and gender and race/ethnicity behind the camera in cinematic content as well as barriers and opportunities facing women and people of color in the entertainment industry. The MDSCI also conducts economic analyses related to diversity and the financial performance of films. In 2015, Dr. Smith was named the #1 Most Influential Person in Los Angeles by LA Weekly. Dr. Smith has written more than 100 journal articles, book chapters, and reports on content patterns and effects of the media.  In terms of the popular press, Dr. Smith’s research has been written about in The New York Times, Los Angeles Times, The Atlantic, Newsweek, The Hollywood Reporter, Variety, and NPR. She has a co-edited essay in Maria Shriver’s book, A Woman’s Nation Changes Everything (2009). Dr. Smith and the MDSCI’s most recent research reports include the Comprehensive Annenberg Report on Diversity in Entertainment (CARD) and a series of landmark studies with Sundance Institute and Women in Film Los Angeles.  To learn more, visit http://annenberg.usc.edu/mdsci or follow on Twitter @MDSCInitiative.

About the USC Annenberg School for Communication and Journalism
Located in Los Angeles at the University of Southern California, the Annenberg School for Communication and Journalism is a national leader in education and scholarship in the fields of communication, journalism, public diplomacy and public relations. With an enrollment of more than 2,200 students, USC Annenberg offers doctoral, graduate and undergraduate degree programs, as well as continuing development programs for working professionals, across a broad scope of academic inquiry. The school's comprehensive curriculum emphasizes the core skills of leadership, innovation, service and entrepreneurship and draws upon the resources of a networked university in a global urban environment.

Gender. Out of 4,370 speaking or named characters evaluated, 68.6% were male and 31.4% were female across the 100 top-grossing films of 2015. This calculates into a gender ratio of 2.2 male characters to every one female character.  There has been no meaningful change in the percentage of girls and women on screen between 2007 and 2015.

Females were over three times as likely as their male counterparts to be shown in sexually revealing clothing (30.2% vs. 7.7%) and with some nudity (29% vs. 9.5%). Girls/women (12%) were also more likely than boys/men (3.6%) to be referred to as physically attractive.

Only 14 of the movies depicted an underrepresented lead or co lead. Nine of the leads/co leads were Black, one Latino, and four were mixed race. Not one lead or co lead was played by an Asian actor.

A full 17% of films did not feature one Black or African American speaking or named character on screen.  This number is identical to what we found in 2013 and 2014. Even more problematic, Asian characters were missing across 49 films.

LGBT.  Only 32 speaking or named characters were lesbian, gay, bisexual or transgender across the sample of 100 top films of 2015.  This is an increase of 13 portrayals from our 2014 report. Just one transgender character appeared sample-wide, as well as 19 gay men, 7 lesbians, and 5 bisexuals (3 males, 2 females). 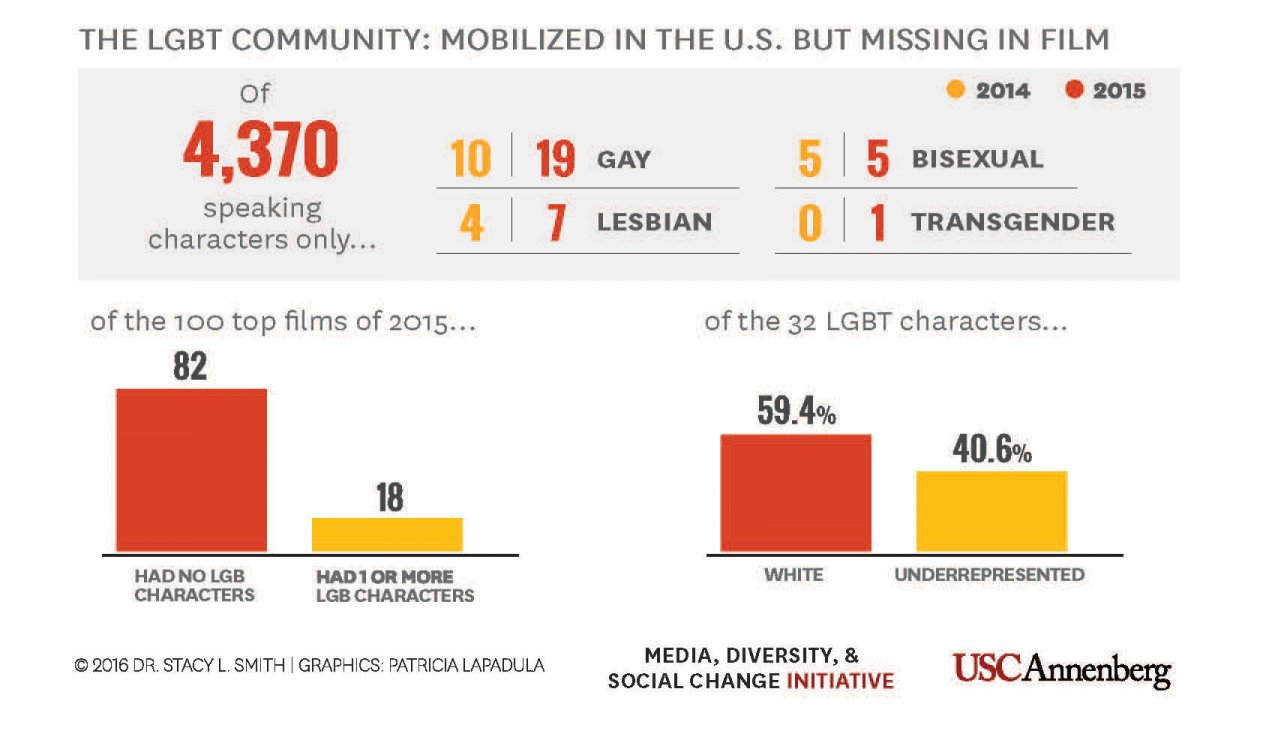 Not one lead or co lead was LGBT identified across the entire sample of 100 top films of 2015. 82 of the 100 top movies of 2015 did not depict one LGBT speaking or named character.

The report also highlights many other results on gender, race/ethnicity, LGBT, and disability in film as well as simple and straightforward solutions to Hollywood’s inclusion crisis. 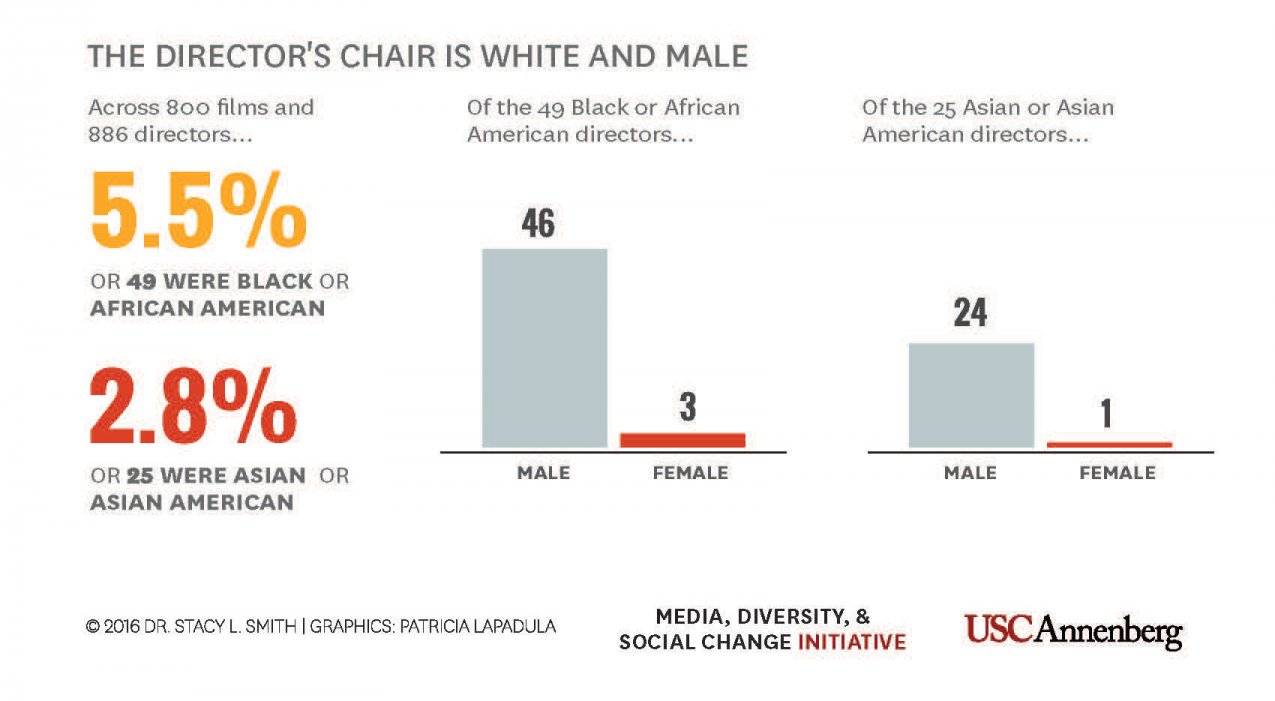 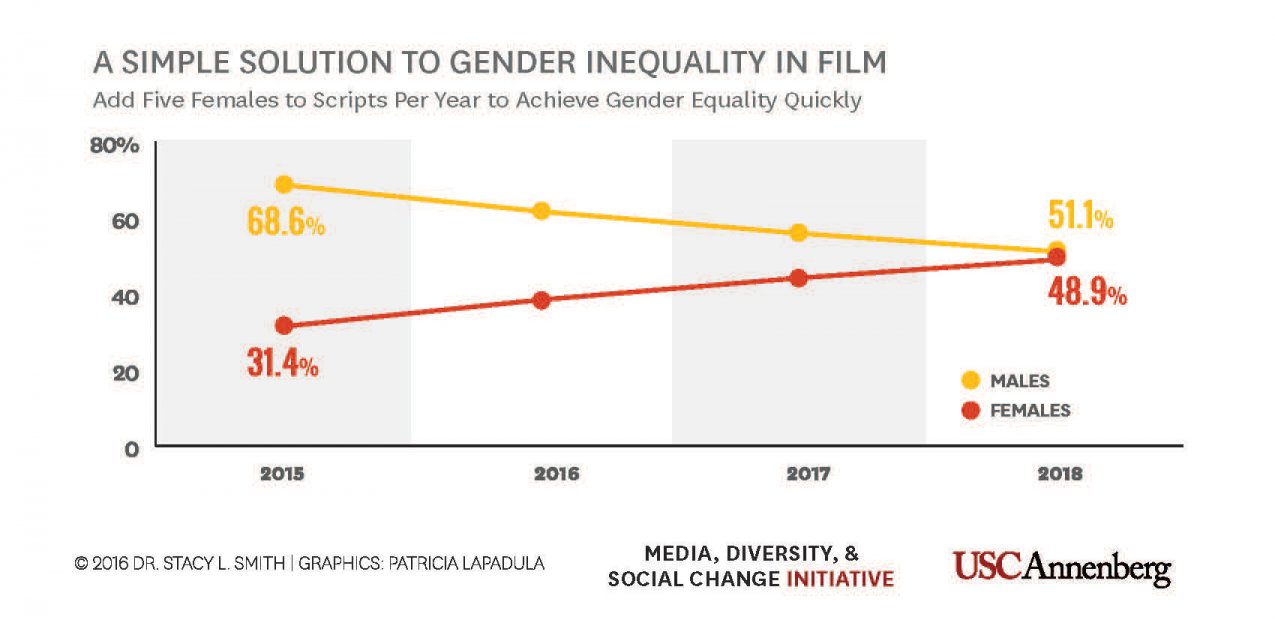