May 13, 2009
Communication and Marketing Staff

The Society of Professional Journalists announced Annenberg Radio News as its Mark of Excellence Awards national winner in the radio newscast category.

The Mark of Excellence Awards recognize collegiate work published or broadcast during 2008. This year, student journalists submitted more than 3,600 entries in 39 categories.

"Given that Annenberg Radio News has only been in operation for two years, this national award is a testament to the talent and dedication of the students who work on the newscasts each week," Annenberg Radio News director Willa Seidenberg said. "I hope we can continue to attract the best and brightest students who will see our program as a way to get top-notch radio journalism training and as a place to experiment with new formats of audio news production."

"These Mark of Excellence Awards winners are some of the best journalists coming out of colleges today,” said Neil Ralston, SPJ’s Vice President for Campus Chapter Affairs. “I believe they represent a lot of hope for the future of journalism in America, and SPJ is honored to recognize them for their excellent work."

The student journalists will be recognized Aug. 28 at the Mark of Excellence Luncheon, which occurs during the 2009 SPJ Convention & National Journalism Conference at The Westin Indianapolis.

Horn, the Thursday host for Annenberg Radio News, is a second-year graduate student in broadcast journalism. He is currently the radio play-by-play announcer for USC Women's Basketball and Cal Lutheran University football.

"Jon has been an enthusiastic staff member of Annenberg Radio News for several semesters," Seidenberg said. "He is an energetic reporter who tries to bring that little extra something to his reports."

Mendez, the Thursday producer for Annenberg TV News, is also a finalist in the Hearst Journalism Awards. He has worked at ATVN since his first semester at USC, previously working on the assignment desk, as a writer/shooter/editor, and as a reporter. He has also worked with the ATVN studio crew as a floor director. Since moving to Los Angeles, Mat has interned at ABC News’ “Good Morning America” and KABC-TV. He worked full-time as an overnight desk assistant at ABC’s New York headquarters this summer, and assisted the network with coverage of the Democratic National Convention in Denver.

"Mat covered the wildfires for ATVN last semester and did a superb job as a reporter, writer, shooter and editor," ATVN associate director Stacy Scholder said. "Mat is the quintessential one-man band." 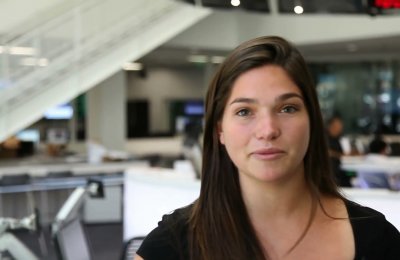