May 19, 2015
Communication and Marketing Staff

Anchor for Univision and Fusion Jorge Ramos delivered the School of Journalism's commencement address on May 15, 2015. The following is a transcription of his speech.

It is great to be here with so much energy and first of all let me just go through the format. I have to thank Dean Ernest J. Wilson and of course the director of the School of Journalism Willow Bay for inviting me this morning to USC.

I am really honored. It’s great to be here in Trojan territory. I’m here to celebrate you and of course to celebrate the new building and media center. I just had a tour. It’s fantastic. It’s the envy! It’s the envy of any school.

We are here to celebrate the incredible diversity of this University. We’re from all over the world, from China to the barrios of Los Angeles. And that is fantastic! We are here to celebrate the collaboration between the Fusion the company I work for and USC Annenberg to train and inspire young journalists. We are here to celebrate the fact that many of you will be the first in your families to graduate. One in seven, I’m told. And I’m sure your parents somewhere here are crying right now. Because we know it’s a family affair — the fact you’re here means the family worked together, it’s prevalent in the Latino families, they work together for you to be here. And now it’s a huge responsibility, so this is a great reason to celebrate.

I guess I was invited here to talk about the future, your future — and this is what I know.

I’m an immigrant and I’m a journalist and those two things define me. 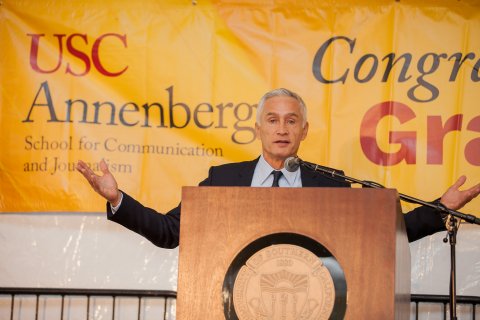 Jorge Ramos, anchor for Univision and Fusion, delivers the commencement address at the School of Journalism ceremony for the USC Annenberg School for Communication and Journalism on May 15, 2015.

USC Annenberg / Brett Van Ort
To be an immigrant means I left everything behind, I left my family, I left my friends my house and I also left the sense that life was going to be predictable. As a young reporter I was censored in Mexico. Back then in the 1980s it was impossible to criticize the President. Just imagine that. Of course I did a report that criticized the President. Before I was fired, I quit. I was going to be fired there was no question about it. I had the opportunity to just say “Well, what should I do?” and I quit. I sold my car, I still remember that, it was an old Volkswagen beetle, a red one. Maybe some of you have that beautiful car. I got a little money, no more than $2,000, and with that I came to Los Angeles as a student. I was only 24. Honestly, I didn’t know anything about the business. But I did know I didn’t want to be a censored journalist.

So I will always be grateful to the United States because this country gave me the opportunities that my country of origin couldn’t give me and I just hope that this country continues to do that with the immigrants who came after me.

So now let’s fast forward to the present. I have been an anchorman for almost 30 years. That means that before you were born I was already covering the news. But here’s the problem. Many years from now when you tell your kids and your family that an anchorman gave the commencement speech at USC when you were graduating they will ask, “Mom, Dad, what is an anchorman?”

Most likely you will have to put me in the same category as dinosaurs and other species about to be extinct and I’m not kidding.

Remember the rain this morning. Remember the rain because I am sorry to say but you are entering journalism and public relations in the middle of a storm. In our profession we are living in the equivalent of climate change with the fundamentals of our profession melting like icebergs in the middle of summer, flooded by social media and looking outside the window honestly with anxiety and uncertainty. Everything is changing, actually, everything is changing and migrating to your cell phones. Newspapers are not being read on paper anymore and guess what? Obviously I’m in the television business and we are producing shows, programs for people who don’t even own a television set. And now let me just give you a quick fact check. In journalism right now we don’t know exactly how to make a lot of money with the new technologies. So don’t expect a big paycheck or at least not now.

On the other hand, I have to confess as a journalist I cannot compete I cannot compete with Facebook, with Twitter, with Snapchat, with Instagram. I simply cannot do that. For instance if there is an earthquake in China, or an accident in France or a shooting in downtown Los Angeles, somebody with a cell phone will be much better positioned than me or than any journalist to report about what’s happening. The iPhone is the most successful and profitable consumer electronic invention in the history of the world and it clearly shows.

So the new rule is digital first.

And the question for you right now is if journalism is ending. Is this the end of journalism? Is everything lost right before you are starting? Absolutely not!

Please, don’t be partisan. Don’t be a Democrat, don’t be a Republican. Just be a journalist.

Now this is what you can do for me and for the rest of us. It is incredibly important because when you’re a journalist you don’t exactly know where to position yourselves. And sometimes you have to please those who are in power. You have to challenge authority. Be a rebel. Your most important social responsibility is to prevent the abuse of those who are in power. Question them. 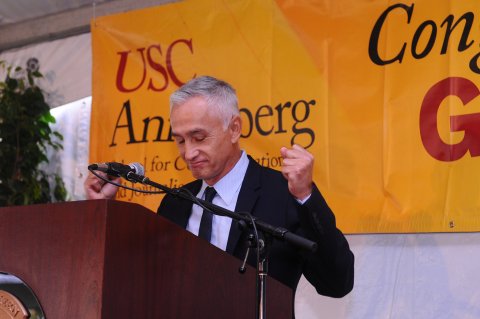 Jorge Ramos, anchor for Univision and Fusion, delivers the commencement address at the School of Journalism ceremony for the USC Annenberg School for Communication and Journalism on May 15, 2015.

And the way to do that is ask tough questions. Don't be scared. There are no silly or stupid or forbidden questions. And your attitude should be that if you don't ask that question to the President, to the Senator, to the mayor, no one else is going to do it. So don't look around to see if someone else is going to do it. It is your responsibility. That's precisely why you chose to be a journalist.

Now taking responsibility is also vital for ethical and successful public relations professionals — your integrity and reputation is your only career-long capital.

Working in-house, PR pros need to be able to ask tough questions of their CEO, of their elected officials, or executive director — whether you are working at a for-profit, government or non-profit. You need to counsel transparency, and always push for the truth to be shared. I know that secrets are never secrets and you have to know that and that questions are your greatest weapon.

Now, how do you know if it's the right question to ask? Well, it is very simple. If when you think of a question, you tremble and your hands start sweating, you know that's a right question. Exactly! And you know you have to ask it. Many times as a journalist and in public relations you do not want to ask the questions and sometimes you don’t want to create conflict, you’re concerned that your boss is gonna get mad, that your company is going to fire you, and right there, when you’re having doubts, that when you have to get the courage to ask the tough questions.

To be a journalist is more than a profession, it’s a mission. You can't go to bed or go on a vacation and stop being a journalist. If you can do that, you gotta quit now because this is not for you. Really. I don’t go to vacation or go for the weekend and say “Oh, I’m not a journalist anymore.” You are going to be called to cover events that you have no idea and you always have to think as a journalist. It’s not a job. It’s really a mission and a way of behaving.

So that’s what I have to say about being a journalist.

If you think that you want to be famous, because we are on TV and so on, you better try Dancing with the Stars. Because let me tell you a story. A few days ago I came to Los Angeles to talk to George Clooney who is one of the most famous people on the face of the earth. And he told me that his fame depended on a lot on luck. Really.  He said that if the television show in which he was a doctor, E.R., had been shown on Fridays instead of Thursdays, his career would not have been as successful. I'm not sure about that. But if George Clooney says that fame is a lot of luck, don't fight George Clooney on that one.

Now, I cannot guarantee that you'll become rich by doing this. As I said before, we're in the middle of a communications revolution and no one really knows where the money is. But if hell is doing over and over again things that you hate to do, well, journalism and public relations is exactly the opposite of that. No day has ever been the same for me in decades. And for me, that is paradise.

Finally, let me just say this, the great thing about being a journalist is that in your job description you have to be a rebel. So find what you are passionate about and speak up.

And also, and this is great for your face, journalism will keep you forever young. Really. Journalism is an art that only happens in the present and then fades away very rapidly. So there's nothing you can do about your age, but there's a lot you can do about being present, being here and now.

So take a stand, be a rebel, be present, be bold, ask tough questions, tell the truth and, please, enjoy the ride. This is the most marvelous profession in the world because the world is your newsroom.

So now, go out there and start playing.