For the past two months, alumni have returned to USC Annenberg for the Media, Economics & Entrepreneurship (M{2e}) program’s Women’s Leadership Society Young Professionals Speaker series. These alumni work with companies as diverse as Bloomberg, Microsoft and The New York Times, and they returned to share their experiences as women in male-dominated fields such as finance and technology, and how their Annenberg educations helped them pursue their career paths.

The series was created and hosted by M{2e} co-director Professor Chris Smith, who also founded and runs the program’s Women’s Leadership Society.

The six speakers who visited during the Wednesday evening talks throughout January, February and March were broadcast journalist Adrienne Bankert, digital marketing manager Piper LeJeune, Stephanie Fleischman, director of ad innovation at The New York Times, Georgina Stage, fixed income specialist at Bloomberg, Erika White, Director of External Affairs at Texas Pacific Group, and Sara Clayton of Microsoft Azure. All of the speakers, except LeJeune, are Annenberg alumni, and several were students of Smith’s or other M{2e} instructors.

Clayton was the youngest of the series, having graduated from USC just last spring, making her easily relatable to the Annenberg students whose shoes she was in not long ago. During her presentation, “Life and Career Lessons from Coffee and Twitter,” Clayton spoke about how networking via Twitter and utilizing apps to set coffee meetings helped her make contacts in the tech world and “master the art of the hustle.”

“[I]t’s not enough anymore to just have a degree,” Clayton said. “Entrepreneurialism is something a lot of companies are looking for in recent grads. They want self-starters, they want people who have that drive.”

During her time at USC and in the first months of her job at Microsoft, Clayton used Twitter to follow journalists and tech insiders whose careers she found interesting, and then tweeted at them to initiate a meeting. She also utilized an app called Weave.In, which matches people with professionals in their fields for coffee dates, a tool Clayton recommended students use to learn more about careers they may want to pursue. Clayton advised students, however, to avoid using informational meetings to ask for a job: “Ask for money and you get advice,” she said. “Ask for advice and you get money.”

Clayton also recommended students build their brand by creating a Twitter account, website, and LinkedIn with professional photo, and to use these platforms to demonstrate to recruiters what makes them stand out.

For Stage, who graduated with a degree in communication, networking enabled her to move from a startup to her position as a fixed income specialist at Bloomberg, this despite not having a background in finance. She heard about the opportunity from a fellow Annenberg alum, and utilized knowledge she had gained at Annenberg and in the M{2e} program to make the most of her first in-person interview with Bloomberg.

“I treated this like a final exam,” Stage said. “The biggest mistake I see is people not doing enough research on the company itself.”

Despite not having experience with finance prior to being hired at Bloomberg, Stage said the interpersonal skills she developed as a communication major at Annenberg were critical to helping her adapt to a new workplace. Having successfully completed two rigorous training programs during her year at the company, Stage said she highly encourages students not to be afraid to pursue jobs in fields they didn’t study.

“You can learn anything,” Stage said. “At the end of the day, if someone is going to sit you down and teach you something, you can learn. It’s a matter of having that drive and that passion to stick with it.”

These and other stories of drive and passion are what inspired Smith was to create the Young Professionals Speaker series. Smith would regularly learn of  the accomplishments of recent alumni and realized that had important insights to share with current Annenberg students.

“When students reach back to me, if I feel like they’re serious minded, I’m reaching back to them, and I’m here to help them,” Smith said. “The five Annenberg alumna selected were people who had stayed in touch. They’re people I was really serious about helping, but also who I felt I could continue to learn from.”

For Smith, mentoring students and fostering talent is something he sees as an integral part of his role as a professor. For example, after being introduced to Clayton through his M{2e} colleague Dana Chinn before her graduation last spring, the two had coffee or lunch several times, and Smith was able to help Clayton land her dream job at Microsoft.

“That’s what top-notch colleges and research universities are all about,” Smith said. “Initially, students learn from professors, and then the tables turn and we learn from them as they emerge and develop. [W]e’re happy to say ‘I knew them when,’ because that’s how great institutions get greater.”

Stage was another recent graduate and former M{2e} student who kept in touch with Smith.  When she was hired at Bloomberg in December 2014, word quickly traveled back to Annenberg: Stage told Smith, who notified a “delighted” Annenberg Dean Ernest J. Wilson III, who in turn  shared the news with the Annenberg Board of Trustees over the holidays.

“You might not think that your early-stage progress in whatever career path you choose makes a difference to the institution, but it does,” Smith said. “Please never think that your baby steps don’t matter or don’t count, to you or to anyone.”

Stage and other speakers used the series to also discuss gender equality in the workplace and how that experience differed from being a woman in the classroom, a discussion that Smith aimed to foster when creating the event.

“In school, we learned about the glass ceiling, we learned about equality, but actually going out and working — I was kind of shocked,” Stage said. “Even though we were taking the same tests and doing the same work, I did get the sense that I wasn’t getting the same amount of credit that my male colleagues were. That was definitely sobering.”

The Women’s Leadership Society was launched at the same time that M{2e} was officially recognized as a minor, and Smith said the goal was to provide women at Annenberg with more leadership opportunities, and a forum to talk about issues such as unequal pay or sexual harassment in the workplace.

“As we’ve gone along, the series is doing the work I’ve wanted it to do, and that’s providing young women a real space in which to talk about these issues,” Smith said.

Smith is hoping to further diversify the M{2e} program and expand the Women’s Leadership Society by creating one or two paid research positions for students to look at issues that affect women in the workplace, such as equal pay and maternity leave.

“Unless these issues are addressed, they’ll be a drag to our economic productivity,” Smith said. “It’s that kind of hands-on learning that really makes a difference in the lives of students.” 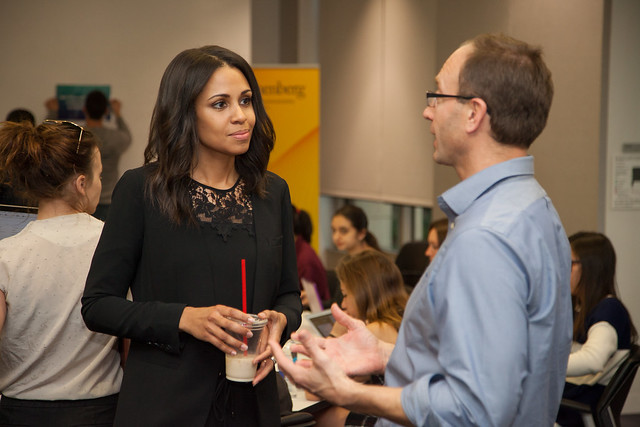 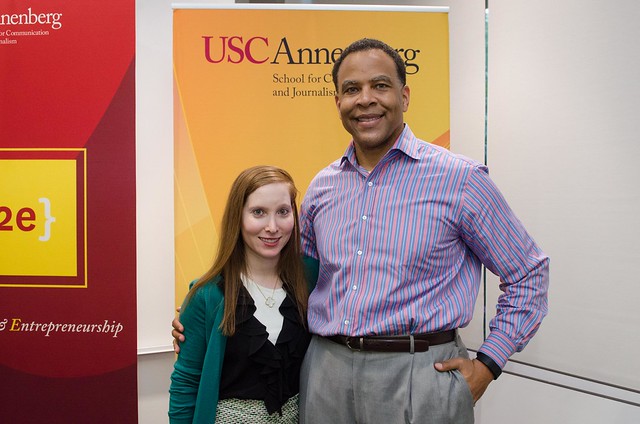 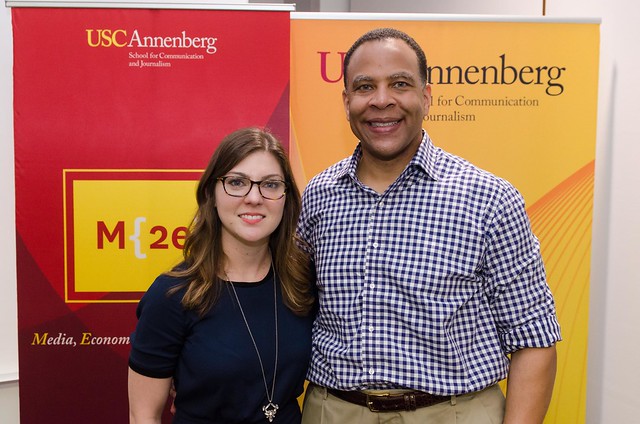 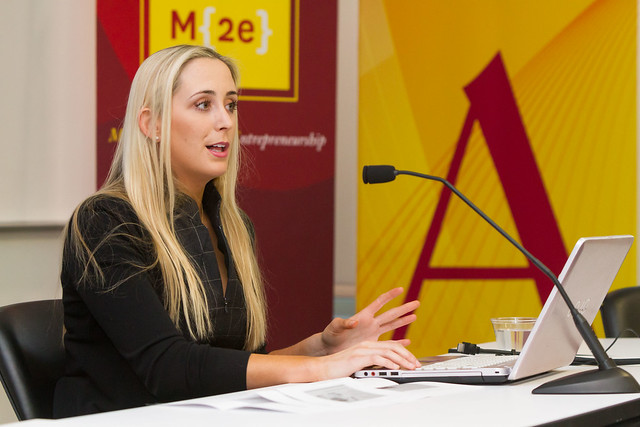 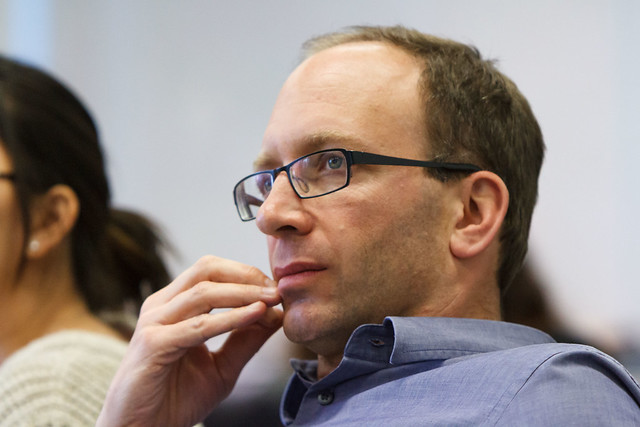 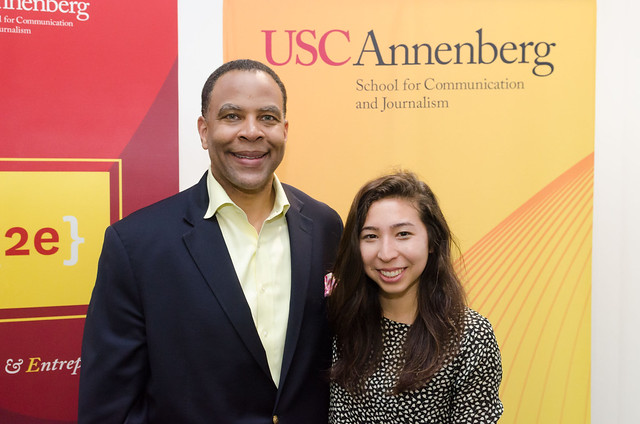