-->Skip to main content
COVID-19 updates: USC | USC Annenberg
News»Research And Impact
Photo by Gotta Be Worth It from Pexels
Research and Impact

Despite President-elect Joe Biden’s call to bring people together, two new studies by the Center for Public Relations at USC Annenberg suggest that both political polarization and the proliferation of conspiracy theories are likely to persist throughout 2021.

In a national consumer survey, 53% of respondents expect polarization of opinion on social issues to stay the same, and 31% predict it will increase. Fewer than half (48%) believe the Biden presidency will lead to national unity, while 23% believe it will see more civil unrest like the recent Capitol riots.

In a separate survey of journalists and PR professionals — which the Center for PR conducted in conjunction with Muck Rack, The Worldcom Public Relations Group and a dozen PR organizations — more than one-third of journalists forecast that the amount of news coverage devoted to politics will decline after the inauguration, along with the average American’s consumption of news. In a more troubling trend, more than three-fourths predict the spread of fake news and the proliferation of conspiracy theories will stay the same or increase during the Biden administration.

“The recent presidential election was billed as an historic game-changer for our nation, but our research shows that the majority of voters plan to double down on the same attitudes and opinions they held before,” said Fred Cook, director of the Center for Public Relations. “The current extreme level of polarization is a critical problem for our nation that government, business and media must work together to solve.”

The data reviewed by the Center for PR was collected through two online surveys fielded by the organization for its annual Global Communication Report, due this Spring. The first survey, which encompasses 940 responses from communication professionals and 519 responses from journalists, was distributed through email lists, social media channels and by Muck Rack, and was live between Nov. 30, 2020 and Jan. 6, 2021. The second survey of 833 U.S. residents was conducted for USC Annenberg by Qualtrics from Dec. 1–4, 2020.

Corporate communicators, who are responsible for managing the reputations of their companies and clients, predict that consumers, employees and activists will expect more action from U.S. corporations on the most polarizing societal issues, like climate change, racial justice and affordable healthcare — topics that many organizations say they are not planning to publicly address.

Still, almost half of the corporate communicators plan to spend more time communicating their company’s values, and one-third will raise their public profile on social issues. Sixty percent also believe that their consumers’ purchase decisions will be increasingly based on their perception of the company’s values and practices as well as the character of their CEO. In response to these heightened expectations, the majority PR executives say they plan to develop more purpose-driven communication campaigns, hire more diverse employees and conduct additional diversity, equity and inclusion training. The percentage of those who plan to increase their partnerships with activist groups has doubled since last year to 29%.

Almost half of the journalists and PR executives agreed that polarization will increase under the new administration, and the majority predict that the level of cooperation between Republicans and Democrats will stay the same or decrease in the future.

Forty-three percent of journalists forecast growth in the use of social media for political purposes, and they also forecast more government regulation of social media platforms. While only about one-fourth of the journalists surveyed believe that the credibility of the media and balanced reporting will increase as an outcome of the election, a whopping 78% report that the credibility of the White House Press Corps will improve.

Consumer survey: Public will continue to be divided over results of presidential election 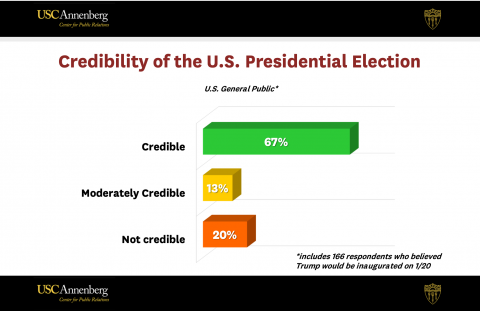 For many citizens, the 2020 presidential election continues to be a divisive issue. In the CPR survey of the general public, 20% found the results of the election not credible, but only 8% stated their patriotism will lessen as a result of the election. Thirty-seven percent of conservatives report their trust in government has decreased, while 42% of liberals feel the opposite. Similarly, 35% of those on the left have gained faith in the democratic process, while 30% of those on the right have lost faith in it.

Only 28% of respondents said their willingness to listen to different points of view will increase, while a mere 18% stated their empathy towards people who disagree with them will grow. Just 27% report that, based on this election’s outcome, they are interested in learning more about other ethnic groups. Seventy-two percent of these Americans predict racism in the U.S. will remain the same or increase.

And no one appears to be giving in or giving up. Nearly nine out of ten individuals, regardless of their political leanings, say their commitment to social change will stay the same or increase, along with their engagement in the political process.

In spite of their profound differences, 63% percent of Americans surveyed say they have a positive outlook on the next four years. Women are more energized about the future than men, and older Americans are more relieved than younger ones. Not surprisingly, those on the political left (78%) and in the center (63%) feel significantly more hopeful about the future than those on the right (41%). Thirty-seven percent of liberals said their desire to move to another country has decreased, while 21% of conservatives are thinking more about packing their bags.

“Healing the deep divisions that exist in society today requires a collaborative approach to communication that is consistent, inclusive and honest,” Cook added. “The fact that Americans remain hopeful is a foundation for positive change.”