Photo by: Pexels/freestocks.org
Research and Impact

The Annenberg Inclusion Initiative in collaboration with Netflix released its newest study today, a first-of-its-kind look at inclusion across Netflix scripted series and films. The Initiative analyzed Netflix’s U.S. original live-action films (126) and series (180) released in 2018 and 2019. The study examined on-screen inclusion across gender, race/ethnicity, LGBTQ+ and disability. Behind the camera, gender and race/ethnicity of key personnel were assessed, as well.

The study, commissioned by Netflix, provides a thorough review of U.S. original fictional content on the service from the years studied. Through this content audit, the Initiative was able to identify the areas where Netflix has been most inclusive, and where progress is needed.

"Our team at the USC Annenberg Inclusion Initiative has brought our extensive expertise, including our precise methodology, to examine content with an extraordinary degree of nuance for a variety of identity groups,” said Stacy Smith, Initiative founder and associate professor of communication at the USC Annenberg School for Communication and Journalism. “We have always ascribed to the highest standard for how research should be conducted, and this investigation is no exception. Netflix has taken a leadership role by examining its own content and sharing the results transparently. This study sets a high bar for the wider industry and demonstrates how an internal audit is a critical first step toward inclusive change."

“Dr. Smith’s years of research — including this new study — confirm that inclusion behind the camera exponentially increases inclusion in front of the camera,” said Ted Sarandos, co-CEO and Chief Content Officer at Netflix, "and both depend on ensuring that the Netflix executives commissioning these stories are also diverse."

Six major trends emerged as a result of the study, all of which are discussed in greater detail in the executive study and full report.

Netflix achieves gender equality in the most prominent roles. 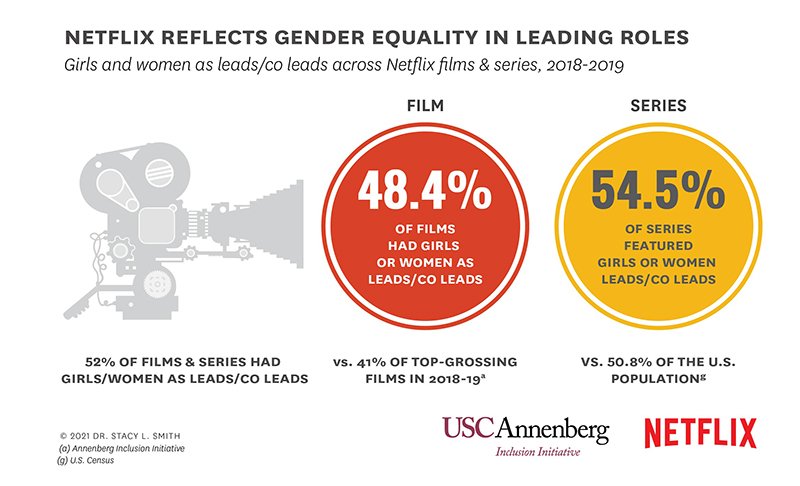 Overall, 52% of all leads and co-leads across film and series were girls and women. 48.4% of all the films evaluated and 54.5% of series were driven by female-identified leads/co-leads.

One of the major reasons for these strong numbers is that women were hired behind the camera. In film, Netflix outpaced the broader industry as 23% of all directors were women (vs. 7.6% of top-grossing films), 25.2% of writers (vs. 16.7%), and 29% of producers (vs. 19%). In series, women were more likely to be series creators and writers in comparison to broader industry statistics.

Netflix’s commitment to racial/ethnic inclusion is increasing over time.

Overall, 31.9% of all leads/co-leads were from an underrepresented racial/ethnic group across both series and film content. This overall point statistic masked an important trend, however. There was a notable uptick from 2018 to 2019 for both film and series. In fact, a full 40% of the leads/co-leads in 2019 films were from underrepresented groups.

Gains were also observed for main cast. 34.1% of main cast roles were held by underrepresented actors across both films and series. But a 6.6 percentage point increase was found in film (32.3% to 38.9%) and an 11.4 percentage point increase in series (27% to 38.4%) from 2018 to 2019. The change over time meant that Netflix films and series were closing in or reached proportional representation to the U.S. population of underrepresented individuals for leads and main cast in 2019.

Women of color are prominent in some areas in Netflix content, at risk of exclusion in others.

Netflix films featured girls and women of color in 19% of all leading/co-leading roles, putting the company’s content at proportional representation with U.S. Census and above the percentage of underrepresented female-identified leads across the 200 top-grossing films from 2018-2019. Moreover, the percentage of girls and women of color as leads/co-leads increased from 2018 to 2019 (from 15.9% to 22.8%). Series lagged behind for men and women of color, with only 10% or less of leads/co-leads from underrepresented racial/ethnic communities.

“Strong Black lead” is more than a marketing slogan. 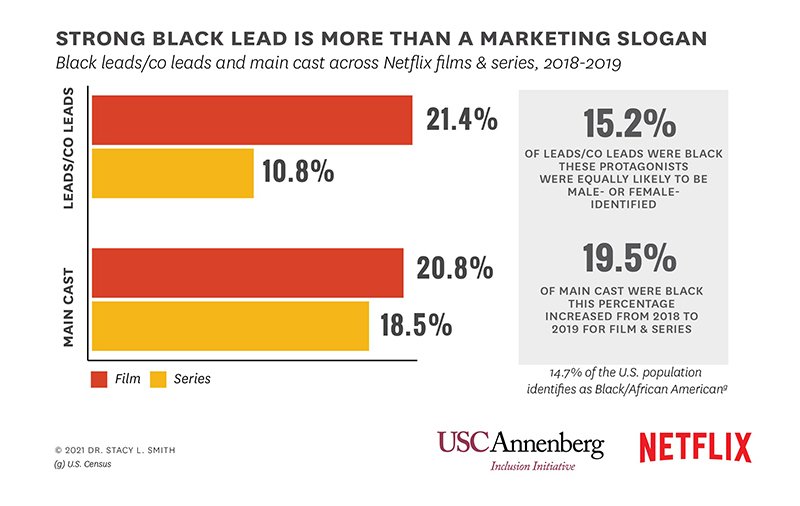 The percentage of Black directors and writers both increased from 2018 to 2019 in Netflix films. In series, Netflix worked with a higher percentage of Black series creators in 2019 than 2018. Black directors, screenwriters, and creators featured more leads/co-leads, main cast, and series regulars than non-Black creative personnel in these positions. By hiring and supporting Black creatives, Netflix ensured that its stories featured more Black leads, main cast, and characters on screen.

Beginning with Latinx characters — or U.S.-born Latinos not of Spanish origin — only 2.6% of leads/co-leads and 4.5% of main cast were from this group. Behind the camera, there were only 7 Latinx creatives who worked as directors, writers, or producers on Netflix films. Fewer than 3% of series creators, producers, writers, or directors were Latinx. Compared to the roughly 12% of the population that identifies as Latinx, Netflix content underrepresents this group.

Turning to Asian cast and crew, 4% of leads/co-leads and 7% of main cast were Asian, approaching proportional representation. Actors of Indian, Chinese, or Korean descent were most likely to appear in Netflix films and series. No more than 5% of directors, writers, producers, or creators across films and series were Asian. Very few cast members or creatives were Middle Eastern/North African, American Indian/Alaskan Native, or Native Hawaiian/Pacific Islander in Netflix films and series. Cultivating opportunities intentionally for these erased communities is not only important but a necessary next step toward greater inclusion.

The LGBTQ+ community and people with disabilities rarely see themselves reflected on screen. 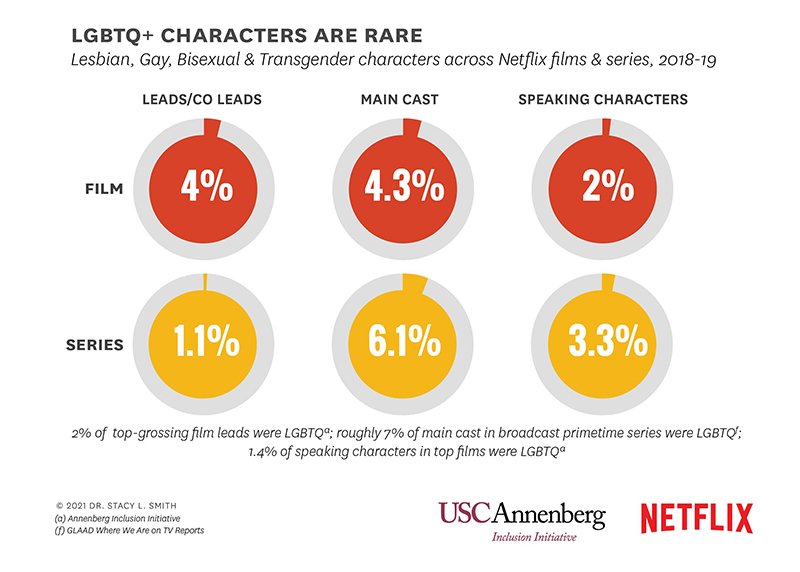 Although nearly 12% of the U.S. population identifies as LGBTQ+, 2.3% of all leads/co-leads, 5.3% of main cast, and 2.8% of speaking characters in films and series combined were LGBTQ. There were very few transgender cast or characters in Netflix content. While half of the LGBTQ leads and co-leads were female-identified, the majority of LGBTQ main cast and speaking characters were men. Of all LGBTQ characters, 40.2% were from underrepresented racial/ethnic groups. Among LGBTQ characters, 17.3% were parents. 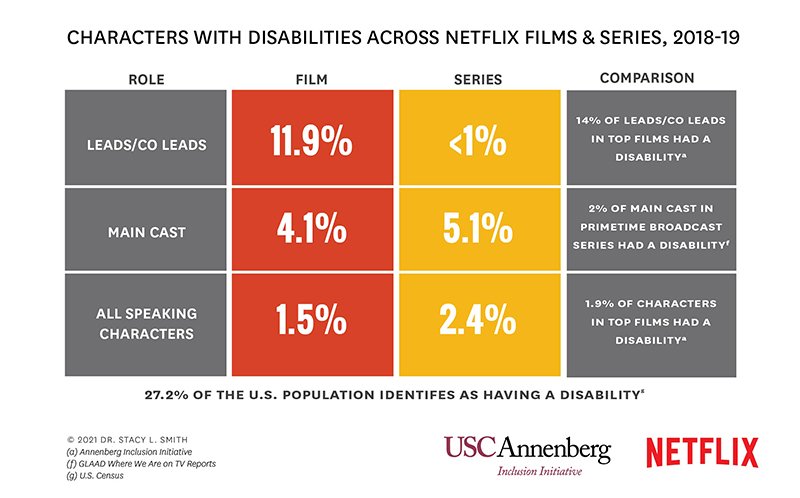 Overall, the findings from this study show where Netflix has made progress — for women on screen and behind the scenes, for Black casts and creatives, and for women of color in main cast and leading roles. Notably, across 19 of the 22 indicators included in this study, Netflix demonstrated improvement across films and series from 2018 to 2019. Given the size and scope of content at the entertainment company relative to its industry peers, this result shows that Netflix is committed to inclusion across its content portfolio. While Netflix must improve in some areas to be inclusive of all groups, this study demonstrates that the company can make strides to do so in the future.