Panelists emphasize the humanity of homelessness

For the past two years, USC Annenberg associate professor of professional practice Mary Murphy and professor of journalism Sandy Tolan have focused their urban affairs reporting classes on coverage of the homelessness crisis in Los Angeles, including downtown L.A.’s Skid Row. The class embodies USC’s overall commitment to eliminating the problem of homelessness.

Murphy and Tolan created a curriculum that teaches their students not only how to address the unique challenges journalists face in covering homelessness and people experiencing homelessness, but also how to search for potential solutions to the problem. The work of last year’s class appeared as a series in the Huffington Post.

To offer their current students some examples of best practices, they convened a panel on Oct. 24, where they invited three storytellers who have delved deeply into the complex issue of homelessness in L.A.

While voters across the city and the state have approved ballot measures to fund solutions to the crisis, the speakers all mentioned the many obstacles to delivering housing or services into particular neighborhoods — including government inertia, lack of political will, and vociferous objections from residents. They also agreed on the importance of treating homeless people with dignity and respect during the reporting process. 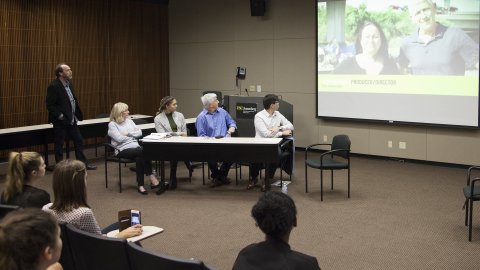 “What really inspired me and changed me was being able to look at people in the streets in the eyes, engage, and just act like a regular human being. You know, ‘How are you doing, sir?’ Because after a while, you're going to start to care for that person. And that's the beginning of the process.”

“A lot of people going to speak about homelessness and volunteer with homeless people come with their own agenda. That is a big problem, and a lot of people on the streets smell it. They feel it. In order for me to be able to film in Skid Row, I spent about three months without a camera, establishing contacts and establishing trust. After three months on Skid Row, when everybody knew who I was and what I wanted to do, then I came with a camera, and I had no more problems. People were very open. But you do have to learn when to shut down your camera.”

“I think that you have to tell individual stories, because that’s where you find the humanity. And I think a lot of the coverage tends to be about numbers and economic policy.

“If someone doesn't want to answer the question, you learn to push sometimes and step off others. I think that's just the process that you have to kind of play it out. I think it's okay to get pushback. I think it's probably a good thing.”

“We have the resources now; we need people who are going to really bring the hammer down and say, these resources need to be distributed here, in this form. The easy answer is, politicians need to have more will, and just force things through. But that’s not really how local politics unfolds.”

“Focusing on the people can be what inspires others to become more educated – and to address the [homelessness] problem. Personally, as somebody who focused solely on individuals in my story, I felt as if I got to know the problem way better than [through] any of the numbers that I looked at. It's just so much more complex than anything that I had ever seen. There's not one blanket solution for each community, and there's not one blanket solution for each individual.”

“In the conversation of homelessness, people talk a lot about food, shelter, like the basic needs. But [the people in the story I wrote] were viewing art as kind of like an essential need. And when it came to housing, as well as how can create sustainable communities, we need to make sure that these communities also have spaces for people to meet each other and to create this kind of work. If they don't have that community, then how the heck are they supposed to like be able to integrate into the rest of the [Los Angeles] community?”