Reporting from the Cathedral of Our Lady of the Angels.
Photo by: Hayley Smith
Classroom and Beyond

On Sunday, March 15, USC Annenberg MS in journalism student Hayley Smith was supposed to be reporting in Armenia — but she wasn’t. Then, she was supposed to be in Alabama — but that didn’t happen either. Instead, she went to two sparsely attended Masses in Los Angeles Roman Catholic churches, which were likely some of the last such services that will be held in Los Angeles for quite a while.

“The people who came to church were just like people everywhere,” Smith said. “They were a little bit confused, some were overly confident, and a lot of people were frightened.”

As the coronavirus pandemic tightened its grip on the normal routines of life in the United States and around the world, the USC community has responded with steps to protect the well-being of students, faculty and staff. The experience of the students and faculty in one USC Annenberg graduate-level course, JOUR 585 “Specialized Reporting: Religion,” provides a window into how those measures have affected students and faculty — and how the people of USC Annenberg have adapted to continue engaging with each other, and with the Los Angeles community. 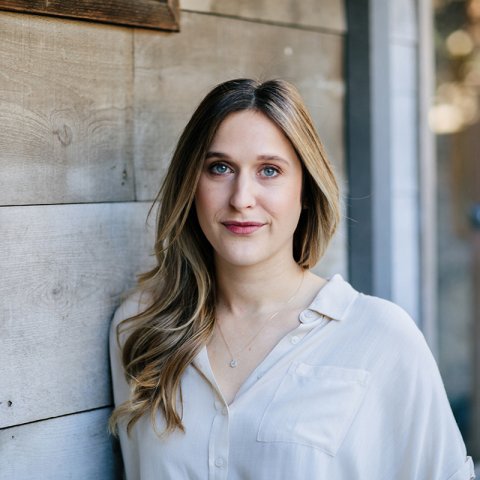 Hayley Smith.
Photo courtesy of: Hayley Smith
“The coronavirus has turned this class into a bit of a roller coaster, just like everything else,” Smith said.

A Miami native, Smith earned her bachelor’s degree in English from New York University, then worked in communications and marketing for some 10 years before deciding to switch career tracks to journalism.

“I was originally drawn to environmental and climate stories, but throughout the course of my time at Annenberg, religion stories and stories about people of faith have continued to come up for me,” Smith said.

Enrolling in the reporting on religion course, taught by Diane Winston and Alan Mittelstaedt, was a “no-brainer” for Smith.

“Religion isn’t a sexy topic for most journalism students,” said Winston, associate professor and Knight Center Chair in Media & Religion. “So, to sweeten the pot, the course includes an international trip to cover religion, politics and culture.” Since launching it in 2010, with funding from the Luce Foundation, Winston has taken students to Israel/Palestine, India, Ireland, Greece, Indonesia and South Korea.

Winston says she and Mittelstaedt organized this year’s trip to Armenia with the assistance of the USC Dornsife Institute of Armenian Studies, with the intention of having students focus on the cultural and political impact of the Armenian Apostolic Church since the Velvet Revolution. Students also researched stories on prison chaplaincies, religious tourism and religion-inspired fashion. The class spent the first half of the semester reporting on the large Armenian diaspora community in Los Angeles, finding stories on religion and tattoo artists, folk dance and the LGBTQ+ community.

Even as COVID-19 continued its international spread throughout January and February, Winston held out hope that the trip could still happen. Then, on Feb. 28, she got word that USC had canceled all international travel.

Winston and Mittelstaedt, associate professor of professional practice, quickly pivoted to a domestic trip. Winston reached out to media contacts in Alabama and was excited by the reporting prospects. “Within 10 days, the students had come up with and begun to report fabulous stories about Alabama,” Winston said. “The editors at both the Birmingham and Montgomery newspapers were very helpful, offering up both their ideas and newsrooms to us. It looked like it would be a really rich experience.”

But when USC canceled all travel at the recommendation of the CDC and moved courses to online instruction, the professors and students pivoted again to look for local stories about “communities of faith, spiritual but not religious outliers and the ways in which the virus is affecting ethical decision-making and spiritual sensibilities,” Winston said. Smith recalls that Winston and Mittelstaedt compared covering coronavirus to being a war correspondent — an idea that inspired her.

“I want to talk to people, I want to see how people are feeling,” she said. “When Armenia got canceled and then when Alabama got canceled, they told us that, as journalists, things are going to happen. You might have to go somewhere at the drop of a hat. You have to be nimble and flexible. It’s a teachable moment for us: Sometimes you just have to get out the door and go.”

Smith says she had already been planning on covering coronavirus and the Catholic Church in Alabama. “The Catholic Bishop of Birmingham had made an announcement a couple of weeks ago about eliminating the communal chalice during Mass,” she said. “So, when that got canceled, I was like, well, I feel like I can still do that story in Los Angeles.”

After attending the 8 a.m. Mass at the Cathedral of Our Lady of the Angels downtown and the 10 a.m. Mass at Our Mother of Good Counsel in Los Feliz — both with very few parishioners present — Smith wrote her article and turned it in to Winston and Mittelstaedt on Sunday evening. Winston floated several possible media outlets that might publish the piece; Smith thought Religion News Service would be the best fit. “It all happened really quickly,” Smith said.

Her piece, “‘Prayer in the Time of Coronavirus’,” appeared the following day on the Religion News Service website. “It was genius of her to go to the cathedral, because that is such a central icon for religion in Los Angeles,” Winston said. “It's also a place where so many people might go for sustenance and comfort at this time.”

Winston says that Smith and her classmates have shown incredible resilience as the COVID-19 crisis has radically reshaped their experience with the course.

“We have an incredible group of students this year,” Winston said. “I've never seen an entire class so motivated, so dedicated and so excited about journalism. Rather than give up in frustration, they keep looking for new ways to make this experience worthwhile for them. And I am inspired by their passion.

“Coronavirus is going to be the religion story of our lives,” Winston added. “Deep questions about morality, mortality and metaphysics are going to be a part of every story on this pandemic. Who lives? Who dies? Who gets a ventilator? These are religious questions, ethical questions. We make moral decisions every time we walk out of our house now.”