This article was originally published by the Center for Health Journalism Fellowships' blog.

Health journalists rely on accurate, updated data to infuse their stories with the rigor that anecdotes alone can’t provide. But until recently, accessing California's health data could be a tough assignment. Some files were only accessible with time-consuming public records act requests. Other datasets were provided as paper documents or in electronic formats that made it cumbersome to crunch the numbers. 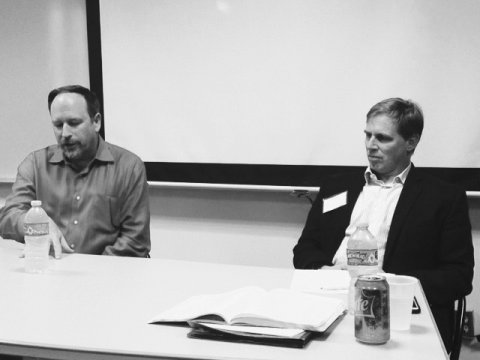 At left, Michael Wilkening, undersecretary of California’s Health and Human Services Agency, and Andy Krackov, associate director of external engagement for the California HealthCare Foundation, talk data.
USC Annenberg / Center for Health Journalism
That began to change last year with the launch of the California Health and Human Services Agency's Open Data Portal, which funnels a host of datasets from California HHS departments into one central location. California is one of a handful of states that have embarked on an open health data project. Still, there remains plenty to do to make the portal a more robust tool for journalists and the public.

USC Annenberg’s Center for Health Journalism brought together top state health officials and journalists last week to discuss how the state can foster easier access to key datasets to advance the high-impact journalism that can result.

In a wide-ranging discussion, Michael Wilkening, undersecretary of California’s Health and Human Services Agency, said last Friday that he was adamantly opposed to opening the data floodgates at first, given concerns about confidential information and hackers. But he underwent a conversion experience as he came to understand the civic potential of securely releasing state data to journalists, advocates and researchers.

The Open Data Portal is in some ways still a nascent effort, with 10 of 12 HHS agencies participating so far. “I told the directors and chief deputies at the beginning of this that this wasn’t voluntary …  and that I’d start with those who were ready and willing, and when I ran out of volunteers, we’d do conscription,” Wilkening said. “We aren’t going to get to conscription — everyone is volunteering to come on. I expect to have all 12 of the departments with a presence (on the portal) by the first quarter of the calendar year.”

As a next step of the open data effort, state officials are trying to get out the word to journalists on what’s available. Citing news stories that analyzed how immunization rates vary across California, Wilkening said the portal’s data is already informing journalists’ stories. “I think the stories that are coming out from the people using the portal are richer — there’s more depth to the story,” he said.

That’s not to say California health journalists now bask in a perfect data clime. Andy Krackov, associate director of external engagement for the California HealthCare Foundation and a key player in the state's open data effort, shared his observations from traveling the state and noting where shortcomings remain. One obvious concern for reporters is the need for more granular data that can be provided for neighborhoods or census tracts, rather than for counties or zip codes. Pointing to child abuse statistics, Krackov said, “If you’re in Los Angeles County, they don’t really mean that much unless you can break those down further.”

If local data are important for reporters, so are data that are up to date. “The data really needs to be fresh,” Krackov said. “When data are released that are three or four years old, I suspect that will make it a little harder to sell to your editors.”

The roomful of reporters at the event, which included journalists participating in the 2015 California Data Fellowship, had a few suggestions of their own for how the state could make its data offerings more useful. Associated Press’ Meghan Hoyer suggested that the state publish a schedule for when certain data sets will be released, so journalists can plan accordingly.

KQED’s Lisa Pickoff-White said many of the datasets would be more far more useful if they were organized by more meaningful boundaries such as census tracts, rather than often-arbitrary zip codes. Some reporters, including freelance journalist Liza Gross, went further and pressed state officials to develop guidelines that would allow reporters to have access to geo-coded data that could help answer fundamental questions about where certain health conditions are more prevalent or where residents are at greater risk for disease.

While it’s easy for journalists to get excited by the health data coming online, Krackov offered a sober reminder that the proliferation of new data streams doesn’t always lead to the social and policy changes journalists might dream of while reporting their latest investigative blockbuster.

“Whenever I’m pressed for examples of how data have been used to influence people's lives, change behaviors or inform policies, I’m hard pressed to come up with examples,” Krackov said. “I think it’s partly because we honestly haven’t been all that good with turning data into actionable information.”

His comments served as a reminder that impactful journalism isn’t just about crunching datasets but also about telling compelling human stories. It’s the unique role of reporters to bridge those two modes of delineating the world. Personal stories are still essential in bringing the data to life.

“We tend to think of data just as data,” said Krackov. “We think about the head and not the heart and the head.”