USC Annenberg and #diverSCity bring conversation about diversity to forefront

In recent years media coverage of racism on college campuses has increased awareness of diversity issues and microaggressions at institutions of higher education across the nation. While media headlines have sparked conversation, it is the the work of various students groups and clubs that have brought these issues to the forefront. At USC, #diverSCity is an editorial project launched by USC Annenberg Media students who aim to document the positive and negative experiences regarding diversity that students face on campus.

In an effort to increase student participation on issues related to diversity, students from professor Rebecca Haggerty and professor Amara Aguilar’s JOUR 499 Journalism for Mobile and Emerging Platforms class teamed up with USC Annenberg Media producers to set up a booth for USC Annenberg’s #diverSCity initiative on the morning of Dec. 4. The set up alongside Trousdale Parkway featured fliers and snacks, posters explaining the initiative, a whiteboard, and two chairs. The whiteboard was divided into two sections: the left side read “Problem” and the right side read “Solution.” The event, led by students and USC Annenberg faculty members, was designed to increase conversation about diversity on campus through the use of student interaction and participation. 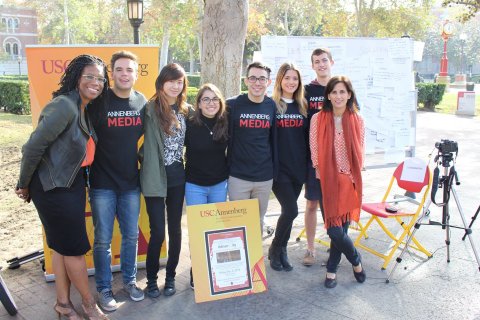 The USC Annenberg Media staff, professor Rebecca Haggerty and her students, and IDEA Program Manager Cyrice Griffith are instrumental in the success of #diverSCity's efforts to increase awareness of diversity on campus.
Courtesy of USC Annenberg Media

Student volunteers approached students walking on Trousdale to come to the booth and explore what #diverSCity has to offer. USC Annenberg student and Annenberg Media Executive Producer Fernando Hurtado stood by a poster board that featured images from #diverSCity’s Facebook page. One image told the story of Muslim Student Union’s President, Nesma Madkour. The caption for her image reads:

“People find out I'm president of the Muslim Student Union and they get shocked because they tell me, 'You don't even look Muslim.'"

Roughly 25 percent of USC’s student body is comprised of international students. Furtado said it’s ironic that despite those statistics, racial issues are still rampant on campus. That is why professors at USC Annenberg and volunteers with the #diverSCity initiative are trying to engage the student body in a conversation about identity, culture, and their socioeconomic backgrounds.

Hurtado said the whiteboard is a way for students to reflect on a personal problem they or their peers have encountered on campus, and then take it a step further by proposing a solution. Although #diverSCity will not be taking the solutions to University Student Government, they will post the handwritten notes online on their Facebook page. This way, the notes will serve as a form of crowd-sourced material that will remain public and spark change. 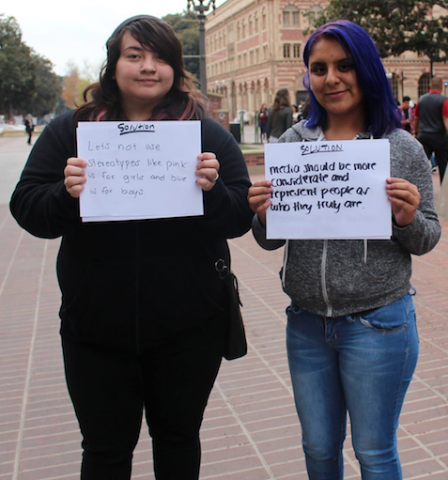 According to these two students, the media can resolve gendered stereotypes through being 'more considerate and [representing] people as they truly are.'
Courtesy of Isabella Jorbajian
“How do you feel when you come to such a diverse university, but still face discrimination and racial profiling?” Hurtado asked. “Obviously, it’s great that we have the second highest number of international students at USC, but that comes with a lot of responsibilities and unfortunately a lot of problems.”

It is these issues that Professor Haggerty hopes that her journalism students will be equipped to solve through hosting such events. In her class, Haggerty makes it a point to urge her students to explore various platforms that a story could be augmented through. The #diverSCity initiative takes that a step further by bringing the conversation into a safe space where students can write out and talk about their personal struggles.

“Traditionally, journalism is about pushing one product out, but now with the way the industry is changing, it’s more about facilitating and creating conversations, and that’s what we wanted to do here,” Haggerty said.

Junior Kevin McAllister, another USC Annenberg Media student volunteer at the event, helped create conversation through urging passersby to pause and take a look at the whiteboard. He also invited them sit down on the chairs by the whiteboard for an opportunity to be paired up with another student and reflect on diversity on campus and exchange their life stories.

“Reading a lot of these up on the board, it’s really interesting to hear a different take,” McAllister said. “The goal with the board was to show the diversity within the problems about diversity. So this is a great way for people to walk by and see what people are feeling and try to fix that.” 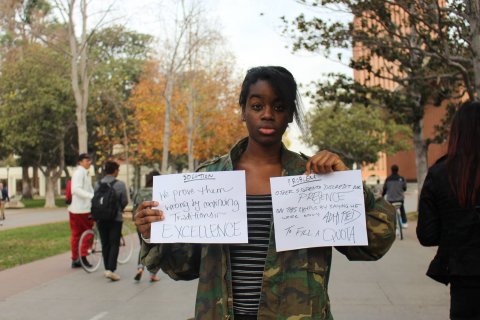 “IDEA is emerging as an institute that will frame and promote the diversity-related scholarly expertise, compelling coursework, and impactful programs at USC Annenberg,” Program Manager Cyrice Griffith said. “It will bring attention to opportunities that allow students, and the greater USC community, to explore and celebrate our diversity, identity, and culture through media communication studies.”

USC Annenberg's efforts to engage the greater USC and Los Angeles community in conversation about these difficult issues are apparent on multiple levels. Junior Hannah Cruz is currently enrolled in professor Alison Trope’s COMM 494 research practicum class which participates in a service learning project at Communication and Technology School in LA’s Diego Rivera Learning Complex. Students enrolled in the practicum work with Trope on the Critical Media Project that Trope launched two years ago in order to increase media literacy and promote discussion about media representations of diversity in the media. As a part of the research, four USC Annenberg students actively work with CATS students and teach them about media literacy.

According to Trope, the #diverSCity event seemed to coincide perfectly with CATS’ students field trip to USC, which is why she brought the students to the booth. Within 10 minutes of interacting with USC Annenberg Media and JOUR 499 students, the high school students had populated the whiteboard with their problems and solutions.

By the end of the hour-long campaign to gather student responses and spark discussion, every inch of the whiteboard was covered. The student volunteers gradually started packing up the posters and chairs, but students still paused by the table to take a look at the problems and solutions that left them astounded.

“As a communication and journalism school we have the responsibility to the voice of a lot of people,” Hurtado said. “After a semester of racial issues comes to the surface, we can’t be biased or anything, but what we can do is expand the definition of diversity. And that’s what we tried to do today.”

Yashashree is a Junior studying Communication and Marketing at USC Annenberg. She enjoys event coverage, fascinating interviews, and creative storytelling. Along with writing for annenberg.usc.edu, Yashashree is passionate about corporate branding and social media strategy....