A group of participants who are housing unstable, participated in a three-day workshop where they learned how to use immersive technology to tell their stories.
Photo by: Richard Tamayo
Classroom and Beyond

“I want to portray the other side, the side of homelessness that shows that we're not all bad people,” Tim Sterry said about his current unstable housing situation. “We’re not all here because we are on drugs. Some of us just came upon a bad part in our life, and it just so happened that we found ourselves having to survive without a household.”

Sterry and 10 other participants were part of a workshop put on by Robert Hernandez, associate professor of professional practice, to teach people experiencing homelessness how to tell their stories using immersive technology.

The three-day workshop was hosted by the Los Angeles Central Library.

Hernandez also included 12 students from his JOVRNALISM class to work with him on this project. “This particular semester, the purpose is for students to not only learn, but be in partnership to empower someone,” said Hernandez. “This is capital ‘J’ journalism, not only because it is innovative, but because of the impact of the story.”

During the workshop, the group brainstormed ideas, wrote scripts, learned how to use 360-degree cameras, but more importantly, they discussed obstacles they faced living in unstable housing — and the unique experiences that come with living under these conditions.

After the workshop, some of the participants spent additional time shooting raw footage for their stories. Many participants worked collaboratively with the USC Annenberg students, who would later be tasked with editing the pieces. Participants were able to keep the camera kits for future projects.

“We wanted to use immersive technology to build the bridge and democratize the consumption and the creation of storytelling,” said Hernandez. 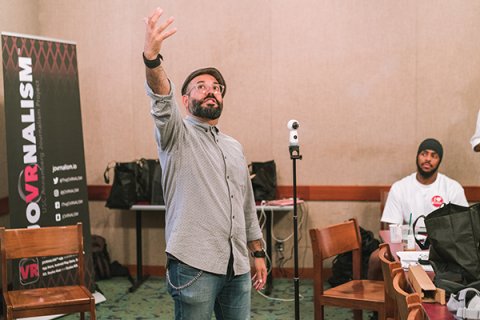 Robert Hernandez, along with a group of housing unstable participants and his JOVRNALISM students at the Los Angeles Public LIbrary teaching them the skills needed to tell their stories using 360-degree cameras.
Photo by: Richard Tamayo
“This is a reality that we don’t experience firsthand or know very much about,” said Sara Rigatelli, who is earning her master’s in specialized journalism and will graduate next year. “For the participants to be able to answer questions like where and how they sleep by bringing the viewer into their own reality of living — whether it is a tent, a makeshift dwelling or a transitional home — is powerful.”

One participant told the story of how her domestic violence experience contributed to her homelessness — which then led her to launch a dog-care business. Others chose topics that focused on art and music therapy to cope with mental illness.

Sterry plans to immerse the audience in the story of how he met his girlfriend. “Regardless that I'm on the streets, she still loves me just as much as she would if I had my own place,” he said. “I want to try and broaden the perspective of what love can actually mean without the balance of human comforts. I guess I'm really excited about these cameras.”

Al-Jazeera, an international media network, will be choosing several stories to publish on their new immersive media studio, Contrast VR. In addition, the stories will also be posted on the JOVRNALISM app, available for IOS, Android, and Oculus Go.

In addition to this specific project, other immersive experiences — including augmented reality, mixed reality and 360-degree videos — will be produced by students under the “Homeless Realities” theme.