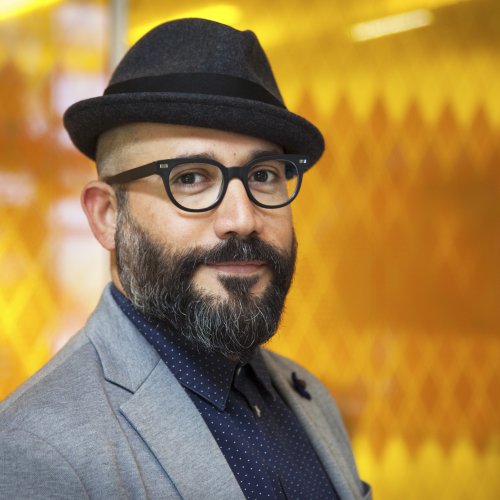 Robert Hernandez, one of the few true veterans of web journalism, has made a name for himself as a journalist of the web, not just on the web. His primary focus is exploring and developing the intersection of technology and journalism — to empower people, inform reporting and storytelling, engage community, improve distribution, and, whenever possible, enhance revenue.

Hernandez is an associate professor of professional practice, AKA a web journalism professor, at USC Annenberg. He’s not an academic… he’s more of a hackademic. He describes himself as a mad scientist for journalism and likes to “MacGyver” web journalism solutions.

He believes in “open source,” sharing knowledge and experiences among journalists. To that end, he has taken the leading role in uniting and building a community of digital journalists and technologists in a variety of ways. From serving on national boards (which have included Chicas Poderosas, InquireFirst, the Online News Association, National Association of Hispanic Journalists, among others) to organizing digital communities around VR Journalism or media diversity issues.

Many journalists know him as the co-founder of #wjchat, a weekly forum on Twitter that that ran for more than seven years and engaged participants from around the world. Or the curator of his Tech & Tool page, a collection of tools aimed at inspiring innovation in web journalism.

His most recent work includes Augmented Reality, Wearables/Google Glass and Virtual Reality — he and his students produce immersive experiences under their brand: JOVRNALISM™. Their work can be seen in The New York Times, NBC, NPR, ProPublica, USA Today and in their own iOS/Android app.

JOVRNALISM has received awards from the Online News Association, the Association for Education in Journalism and Mass Communication, the LA Press Club and The Webby Awards, among many others. It has also been awarded grants from the Knight Foundation and others.

He is the recipient of SPJ’s 2015 Distinguished Teaching in Journalism Award. He has been an international keynote speaker, panelists (SXSW three times), moderator and gave a TEDxKC talk on the future of news and misinformation.

Prior to joining Annenberg, Hernandez was director of development for The Seattle Times, where he worked from 2002 until 2009. He helped shape and execute the vision for the website and company, leading a team of engineers and designers in creating innovative tools and applications for readers as well as staff. He also worked as a web designer and consultant for El Salvador’s largest daily newspaper site, La Prensa Gráfica, web producer for The San Francisco Chronicle and online editor of The San Francisco Examiner.

Hernandez has made it to Imgur’s front page more than once. He connects dots and people.