Paloma Chávez sparks her own personal activism through reporting

As the granddaughter of César Chávez, one of the questions Paloma Chávez has contended with during her life is how the legacy of her ancestors should inform the life she chooses to live. “You're in charge of writing your present and your future even if your past is written for you,” she said.

Chávez, who graduated this week with a bachelor’s degree in journalism, chose the field as a way to tell the stories of people who aren’t always on the front page of a newspaper or magazine. “As much as I do like entertainment journalism, I think there is something about interviewing and reporting on your neighbor down the street that is so much more powerful,” she said. “We are all just individuals living on this planet. And everybody has a story to tell.” 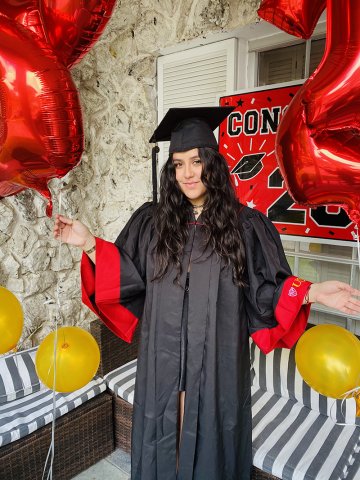 Paloma Chávez in cap and gown as part of USC Annenberg's virtual celebration.
Photo courtesy of Paloma Chávez
Born and raised in Northern California, Chávez moved with her family to Sarasota, Florida when she was 9, as an older brother was accepted into a prestigious sports academy. While her father and both brothers are avid golfers (both brothers ended up playing professionally), Chávez never picked up the love of the game and only turned to journalism after talking to her mother about career choices. Her mother, Myriam Lesnick, attended Columbia University School of Journalism and encouraged Chávez, who loved creative writing, to consider it as a possibility. Chávez graduated high school early, at 17, and moved out to Southern California, where she stayed with an aunt and attended Santa Monica City College. In 2018 she transferred to USC Annenberg.

While she says she had a tough start as a transfer student, Chávez found that when she started to really put herself out there and got involved — specifically in student clubs and organizations — her school life improved.

One of the extracurriculars she is most proud of is her work with a student organization on campus, WYSE (Women and Youth Supporting Each other). Over two semesters, Chávez joined other USC college students – first traveling by car and then by Zoom – to local middle schools. Here they mentored eighth-grade girls on issues pertaining to their personal lives. “It was amazing being an advocate for these girls,” she said.

As a journalism student, Chávez had a lot of opportunities to work in the Annenberg Media Center, whether she was writing or reporting, but it was her stint working at Dímelo, a student-run Latinx vertical through Annenberg Media, that helped her to reconnect with her roots. She was recruited to Dímelo by Allan Lopez, an adjunct instructor and media center coach, whom after having had her in class the prior semester, invited her to join. Here Chávez started to write more personal essays about her life. “It was weird,” she said. “It was like, once I started to realize, accept and feel empowered by my Latinx roots, all these new doors opened up, and it was like, ‘Whoa, you guys have been here the whole time.’”

Having grown up in a predominantly white neighborhood, Chávez never really thought of herself as half-Cuban American and half-Mexican American. “I thought I was a tan, white kid,” she said. Chávez also shared there was never any pressure to follow in her grandfather’s footsteps.

“There are times that I think I should be writing letters to my Senator and stuff like that, and it does spark a bit of guilt at times, but my dad was fortunate enough that his father didn’t pressure him into running the UFW [United Farm Workers]. He said, ‘No, you go do what you want to do,’ which, for my dad, was law school.”

Chávez is thankful for USC and the Trojan community — “not just for the degree, but for all the things I’ve learned that have helped shape me into the person I am now,” she said. “They were always there to be given to me, I just didn’t want them yet,” she said.

As she goes out into the work world, looking to continue telling the stories of those who aren’t front-page news, she realizes that “Although I don't face the same struggles as some people, I can be part of the solution. Some of the people I tell stories about look just like me. And in another world, that is me. I am the farmworker who doesn’t go to college because of X, Y, and Z.”