In a photo from the “Fruits of Labor” series by Associated Press reporters Margie Mason and Robin McDowell, a female worker walks with a pesticide sprayer on her back at a palm oil plantation in Sumatra, Indonesia.
Photo by: AP Photo/Binsar Bakkara
Spotlight

Beginning in 2018, Associated Press investigative reporters Margie Mason and Robin McDowell relentlessly examined the working conditions on palm oil plantations in Indonesia and Malaysia. The result is a searing exposé that reveals shocking abuses against some of the world’s most vulnerable laborers — and then connects that mistreatment directly to a byproduct found in roughly half the items for sale in American supermarkets.

“There’s never been a big spotlight placed on the labor issues of this $65-billion industry — and the problems are endemic,” McDowell said. “Companies have been able to ignore them because they’re hard to investigate and not something most journalists will want to invest the time into.”

For their project, “Fruits of Labor,” Mason and McDowell have earned the 2021 Selden Ring Award for Investigative Reporting. The annual award, one of the foremost honors in investigative journalism, has been presented by the USC Annenberg School of Journalism for 32 years. The $50,000 prize honors investigative journalism that informs the public about major problems and corruption and yields concrete results.

“There has been so much incredible investigative reporting done in 2020, even as journalists contended with the challenges and health risks created by the COVID-19 pandemic,” USC Annenberg Dean Willow Bay said. “USC Annenberg is proud to have partnered with the Ring Foundation to once again present this prestigious award celebrating the very best in investigative journalism, in a year when we needed this kind of hard-hitting, results-oriented reporting more than ever.” 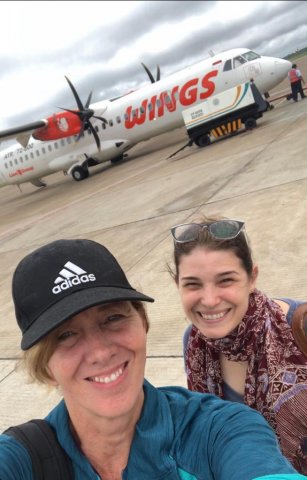 Robin McDowell (L) and Margie Mason (R).
Photo courtesy of: Robin McDowell and Margie Mason
Mason and McDowell, who were also part of the AP team that won the 2016 Selden Ring Award for the “Seafood from Slaves” series about labor abuses in the Thai export fishing industry, were looking for a reporting angle on the palm oil industry. With Myanmar’s repression forcing many Rohingya to flee the country as refugees, the pair saw an opportunity to tell the story of Rohingya working on the palm oil plantations, which rely heavily on migrant labor.

“There’s always a shortage of labor in the palm oil industry, so we started looking into telling the story of Rohingya refugees there,” Mason said. “But once we started digging into it, we realized that this was so much bigger than just them.”

Mason and McDowell went on to spend more than two years finding workers who told graphic stories about being raped in fields or held against their will and forced to work. The reporters then painstakingly worked to corroborate allegations with local police reports and labor complaints.

“It was difficult work,” Mason said. “A lot of the plantations are guarded, so getting onto them required a lot of planning, source building and trust. And when we didn’t think it was safe to interview workers on the plantations, we would talk to them when they could come out, which created its own challenges.”

The reporters were also determined to examine the entire industry, not just a single plantation, firm or country. “We realized that if we just focused on one grower and those doing business with that grower, the response would be to just cut ties or sanction that one place,” Mason said. “But it wasn’t just one place, it was everywhere we looked.”

In addition to their on-the-ground reporting, the pair used their expertise in supply-chain tracking that had served them so well on the “Seafood from Slaves” series, tracing palm oil harvested by abused workers into products sold by Procter & Gamble, L’Oreal, and even the Girl Scouts.

“Many of these companies have some kind policy statement that touches on the environment and human rights, so sometimes when we reached out to those firms, they would just refer us back to those pages on their websites,” McDowell said. “Some didn’t respond at all.”

After their report ran, the U.S. Customs and Border Protection announced it was blocking all imports from two of the world’s biggest palm oil producers — Malaysian-owned FGV Holdings and Sime Darby Plantation. Two dozen Democratic lawmakers urged the U.S. government to take action on palm oil. And the Girl Scouts declared that child labor did not belong in its cookies and called on manufacturers to address abuses linked to palm oil in their supply chains.

Though she says that these represent only first steps, McDowell says she’s pleased with the early reactions from governments and others to their reporting.

“The issues were being completely ignored," McDowell said. "Palm oil is basically in everything we touch and use, but people didn't know anything about where it came from, I think a lot of companies didn’t really realize the extent of the abuses.”

“We are deeply grateful to the Selden Ring 2021 judges’ panel for their hard work during such a challenging time,” said Gordon Stables, director of USC Annenberg’s School of Journalism. “Each of these accomplished journalists is already playing a significant role with their own work and yet took on the formidable task of reviewing a highly competitive field of 90 entries, which demonstrate just how pervasive impactful journalism continues to be across this country.”

BuzzFeed News and The International Consortium of Investigative Journalists, “The FinCEN Files.” The judges called this series “a massive feat of investigative reporting giving readers an unprecedented look inside the shadowy world of international finance.” It had immediate impact: The U.S. Congress passed landmark legislation that would require new requirements that owners of shell companies identify themselves. In addition, U.S. regulators made changes to how they monitor the banking system to “address the evolving threats of illicit finance.”

ProPublica’s investigation into car seat maker Evenflo and its Big Kid booster seat. This investigation highlighted the subtlety of how just a few pounds can mean the difference between life or death for a toddler. The culmination of months of gathering data, testimony and expert insight, Daniela Porat and Patricia Callahan’s reporting revealed what judges called “the galling lack of oversight on a basic necessity for parents who drive young children: booster seats.” The impact of this work was quick and significant. The National Highway Traffic Safety Administration, after years of inaction, finally moved toward raising the minimum weight for children using boosters. Evenflo and several of its competitors were prompted to stop labeling such seats as safe for 30-pound children.

Special Citation: Manual RedEye for “Bigoted Badges.” What judges called “a dogged investigation” by two high school students in Kentucky revealed that law enforcement agencies in that state were relying on quotes from Hitler and anti-Semitic images in training materials meant to inculcate the “warrior mindset.” The students’ reporting, which they undertook after professional journalists passed on the story, forced the resignation of the Kentucky State Police commissioner and compelled Kentucky’s governor to initiate a “top-to-bottom” review of training material used by law enforcement.

Special Citation: Open Vallejo for “Vallejo Police Bend Badges to Mark Fatal Shootings.” In Vallejo, Calif, a small nonprofit watchdog website exposed, in its inaugural story, that in a police department with a long history of excessive force, officers had a tradition of celebrating on-the-job shootings by bending their badges. The revelation, made despite numerous pre-publication threats to the reporter, sparked an outside investigation and prompted several senior officers to retire or go on leave.

The Selden Ring Award has been part of USC Annenberg since 1989, when it was established by Southern California business leader and philanthropist Selden Ring to highlight the impact investigative journalists have on local, national and global communities. The award continues thanks to support from the Ring Foundation.