-->Skip to main content
COVID-19 updates: USC | USC Annenberg
News»Research And Impact
‘Tug-of-words’ posts debating the merits of socialism versus capitalism are all over social media platforms.
Photo by: pxfuel
Research and Impact

The socialist bogeyman: What social media can teach us about American political discourse today

This article was originally posted on The Conversation and is republished here with permission.

The word “socialism” has become a trigger word in U.S. politics, with both positive and negative perceptions of it split along party lines.

But what does socialism actually mean to Americans? Although surveys can ask individuals for responses to questions, they don’t reveal what people are saying when they talk among themselves.

As a social media scholar, I study conversations “in the wild” in order to find out what people are actually saying to one another. The method I developed is called netnography and it treats online posts as discourse — a continuing dialogue between real people — rather than as quantifiable data.

What I found was both shocking and heartening.

Both support for socialism and attacks on it appear to be on the rise.

Socialism can mean different things to people. Some see it as a system that institutionalizes fairness and citizen rights, bringing higher levels of social solidarity; others focus on heavy-handed government control of free markets that work more effectively when left alone. U.S. Senator Bernie Sanders, a self-described democratic socialist, emphasized the right to quality health care, education, a good job with a living wage, affordable housing and a clean environment in a 2019 speech.

These and other advocates point to a version of socialism called the “Nordic model,” seen in countries like Denmark, which provide high-quality social services such as health care and education while fostering a strong economy.

Critics call socialism anti-American and charge that it undermines free enterprise and leads to disaster, often using the unrealistically extreme example of Venezuela.

During the 2020 election season, Republican Senator Majority Leader Mitch McConnell advised that his party could win by being a firewall against socialism. He was on point: Fear of socialism may have been a reason why the Republicans gained seats in the U.S. House of Representatives in 2020.

Although I wasn’t initially looking for posts on socialism or capitalism, I found plenty of them in my online investigation. Many were what I call a “tug of words” in which people asserted which system was better. People from opposite ends of the political spectrum made pithy observations, posted one-liners or launched strong, emotionally worded broadsides. There was often little dialogue — those who posted were shouting at each other as if using a megaphone.

A YouTube commenter uses a megaphone-like approach to preach about the perils of socialism.
Screen shot by Robert Kozinets

Some commentary on socialism on Pinterest.
Screen shot by Robert Kozinets

But some people were more circumspect. While they were often reactive or one-sided, they raised questions. For example, people questioned whether business bailouts, grants, lobbying or special tax treatment showed that capitalism’s “free markets” weren’t actually all that free. 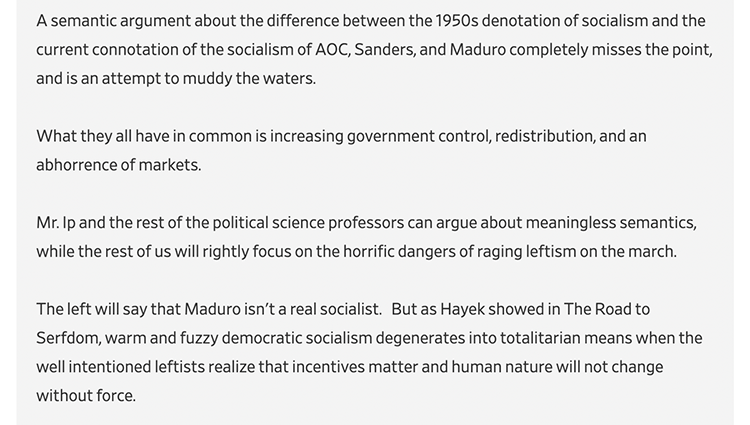 Making a historical economic argument against socialism and its slippery slope to totalitarianism.
Photo from Robert Kozinets’ data collection

And some considered what “socialism” actually means to people, linking that meaning to race, nationality and class. 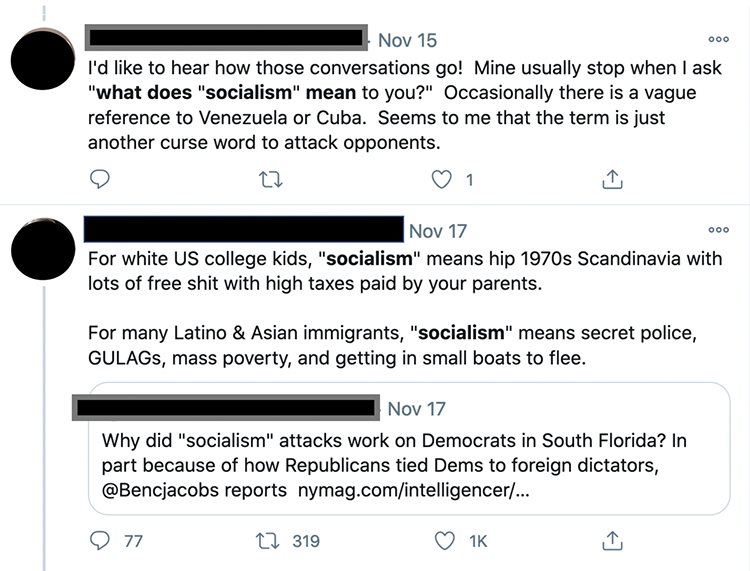 The meaning of socialism discussed on Twitter.
Screen shot by Robert Kozinets

Amid all the sound and fury of people shouting from their virtual soapboxes, there were also the calmer voices of those engaging in deeper discussions. These people debated socialism, capitalism and free markets in relation to health care, child care, minimum wage and other issues that affected their lives.

One YouTube discussion explored the notion that we should stop viewing everything “through the primitive lens of the nonsensical ‘isms’ – capitalism, socialism, communism – which have no relevance in a sustainable or socially just and peaceful world.”

Other discussions united both left and right by asserting that the real problem was corruption in the system, not the system itself. Some used social media to try to overcome the ideological blinders of partisan politics. For example, they argued that raising the minimum wage or improving education might be sensible management strategies that could help the economy and working Americans at the same time. 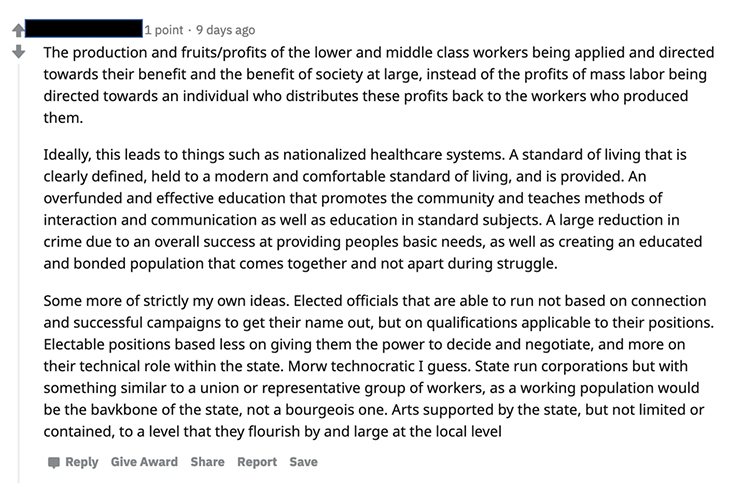 As America’s post-election divisions fester, my work gives me reason for hope. It shows that some Americans – still a small minority, mind you – are thoughtfully using popular social media platforms to have meaningful discussions. What I have provided here is just a small sample of the many thoughtful conversations I encountered.

My analysis of social media doesn’t deny that many people are angry and polarized over social systems. But it has revealed that a significant number of people recognize that labels like socialism, free markets and capitalism have become emotional triggers, used by some journalists and politicians to manipulate, incite and divide.

To unify and move forward together, we may need to better understand the sites and discussion formats that facilitate this kind of thoughtful discourse. If partisans retreat to echo chamber platforms like Parler and Rumble, will these kinds of intelligent conversations between people with diverse viewpoints cease?

As Americans confront the financial challenges of a pandemic, automation, precarious employment and globalization, providing forums where we can discuss divergent ideas in an open-minded rather than an ideological way may make a critical difference to the solutions we choose. Many Americans are already using digital platforms to discuss options, rather than being frightened away by – or attacking – the tired old socialist bogeyman.