Social media and the cultural value of hanging out

Entertainers who create original content on social media platforms such as YouTube, Instagram or Twitch don’t at first seem all that different from their counterparts on traditional media. After all, whether their content is live or on-demand, it’s still ultimately just video or audio, right?

Clinical Professor of Communication David Craig begs to differ. In the new book Social Media Entertainment: The New Intersection of Hollywood and Silicon Valley, he argues that social media isn’t merely another medium through which traditional forms of entertainment are delivered. Together, Craig and his co-author Stuart Cunningham, a respected author and media scholar from Australia, assert that content creators on social media are forging something completely new. They maintain that the user experience of social media entertainment is unique, and needs to be understood not only as its own form of expression, but as a way of building community.

That real-time sense of belonging makes the relationship between social media entertainers and their fans in many ways unprecedented — and also creates new money-making opportunities for these online celebs. As Craig prepared to participate in the “Entertainment, Information, and Addiction: Our New Digital, Social World” panel at the Los Angeles Times Festival of Books on the USC Campus on Saturday, April 13, he shared some insights into this phenomenon. 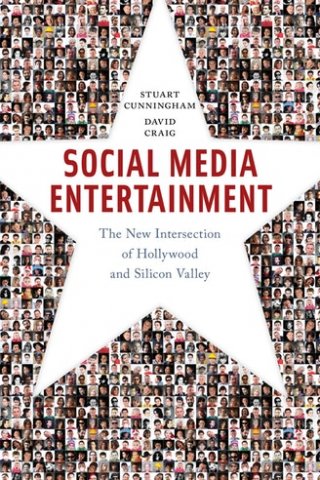 What was the most surprising aspect of social media that you discovered when researching this book?

That there are millions, if not hundreds of millions of people now using social media platforms to build cultural and commercial value. The size, breadth, influence and economic value of traditional media industry pales in comparison to that. So, what we had thought was this nascent, little marginalized thing over here that seemed to look similar to traditional media industries, turned out to be something extremely important and extremely different. Our research has taken us to 10 countries in 25 cities — and that includes China, which has its own competing social media entertainment industry.

What do you mean by cultural value?

Even within the social media generation, you have vast distinctions between those who grew up on the first generations of YouTube, Facebook and Twitter on the one hand, and then Instagram, Vine and Snapchat on the other. So, in terms of measuring cultural impact, we are aware of the dramatic differences in attitudes and civic cultural, social and political activity that that social generation has from its forebears. For the creators of the social generation, what we've found repeatedly was that they were not interested in creating intellectual property. That's not what they make. The value that they build on these platforms is social. They create little micro-societies that are centered around the sorts of things that they're interested in: their identities, their values, their ideologies, their interests, their hobbies. And in doing so, they're able to then leverage that as entrepreneurs.

How is the business model for these entrepreneurs different from that of traditional media?

It’s incredibly diversified. Take Tyler Oakley, for example, who’s one of the leading LGTBQ creators. He has partnership agreements with YouTube to get a split of the advertising, which is fairly nominal, and subscription fees because he's now also featured on their YouTube Premium platform. But, he also has a Patreon account, where he gets subscription fees from his community signing up to pay a monthly fee. He’s also been producing podcasts and getting advertising through that. He's produced music, two books and he had an 86-city tour that sold out in a half an hour. He’s managed to build such fidelity between his community and himself that they’re willing to pay anything to just sit in the room with him, because they’ve been hanging out with him online for more than a decade.

That’s it, isn’t it? The experience is less like watching, and more like hanging out — it’s more intimate.

Absolutely, because the medium itself is participatory. Even if you’re just watching a YouTube video, you can be engaging socially through the comments.

How do you view corporations’ efforts to tap into these creators’ communities as “influencers”?

We tend to get preoccupied, especially as media scholars, with looking at things through the lens of content and distribution. Advertisers refer to them as influencers because they see this solely in terms of their ability to promote and sell products and services. No one we interviewed for this book saw themselves as either a producer, writer, actor, director — or as an influencer, advertiser or promoter. They saw themselves first and foremost as members of a community that they just happened to be involved in and leading. And that’s a very fragile thing, especially if you start working with corporate entities. If you violate the norms of your group, you lose everything you've built, and it can happen overnight. There was one quote we got from a talent manager who said, “That 19-year-old is happy to take that million-dollar check from an advertiser — unless it's the last check he ever gets.”

What’s next for this research?

In the last chapter of our book, we anticipate the rise of China’s alternative social media entertainment industry, as well as increasing government regulation from around the world. We weren’t wrong. In the wake of the backlash against platforms, creators are rarely acknowledged and more often suffer the consequences of platforms changing their services and algorithms to avoid regulation. We also witnessed top creators like Oakley, Casey Neistat, Ingrid Nilsen and Akilah Hughes, risking their commercial value to advocate for a progressive politics, which we find encouraging. Our next book will focus on the Chinese industry, which already has more advanced platforms and a more sustainable creator economy.