The rent is due and the cops are called

LAPD receives a flood of calls about landlord-tenant disputes during COVID-19.

On Sept. 1, police in Los Angeles responded to almost twice as many landlord-tenant disputes as they had on the day rent was due just one month before. Now, rent day is approaching again, and so is the potential for more confrontation, as the economy limps along due to the coronavirus, and unemployment in the city remains stuck at 18.5%.

The Los Angeles Police Department responded to 48 calls for service regarding a landlord-tenant dispute on Sept. 1, a nearly 85% increase from the 26 calls they answered on Aug. 1, according to department data.

Service calls are a record of all instances that LAPD officers answer, including those that come in through 911, the department’s non-emergency number and events that officers respond to in the field. When an altercation between a landlord and a tenant escalates to the level where the police are called, it becomes part of that record.

Rent-day service calls for disputes between tenants and landlords were low early in the year, then began rising as the spread of the coronavirus led to many business shutdowns and job losses. The 18 calls for service on Feb. 1 almost tripled to 50 two months later.

The number of calls tapered off as the city enacted a moratorium on evictions and the CARES Act approved by Congress resulted in people who had lost work receiving an additional $600 per week in unemployment benefits. On June 1 the LAPD responded to just one landlord-tenant dispute call, according to department data. 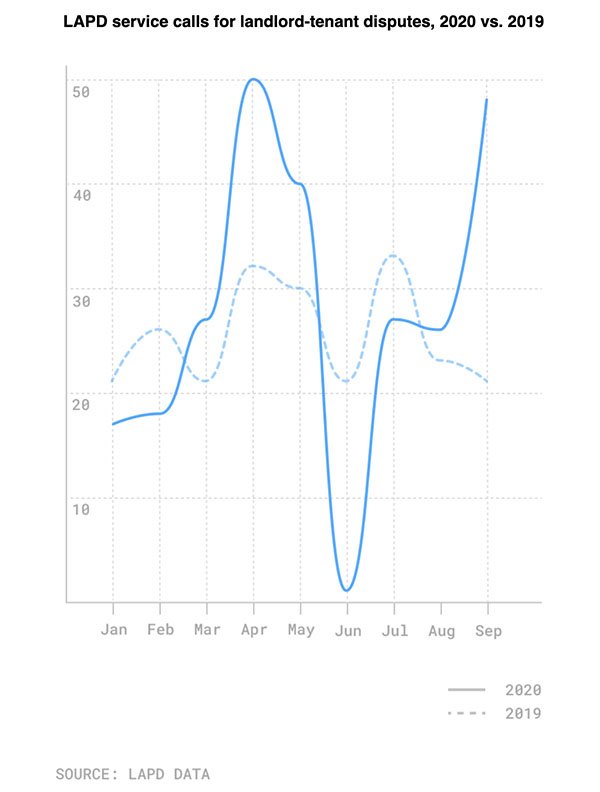 The enhanced unemployment benefits expired for Californians on July 25. The first time rent was due after those payments stopped was Aug. 1. Although California residents who are out of work are eligible to receive up to three weeks of additional $300-per-week benefits, according to the Employment Development Department, many eligible recipients had not been able to access those funds before September’s rent was due.

State and city leaders are racing to help at-risk tenants. Gov. Gavin Newsom on Sept. 23 signed an executive order allowing local governments to halt evictions until March 31, 2021, for people who lost work due to the coronavirus pandemic.

But the scope of these initiatives does not appear adequate to address the rising level of economic distress. The demand for assistance for both programs quickly exceeded the money available.

Additionally, on Sept. 23 the City Council approved allocating $10 million to a legal defense fund to help city residents who are at risk of losing their housing. The program will allow those who are at 80% or below of the area median income to receive free legal representation when facing eviction or negotiating with a landlord.

“Despite tenant protections we put in place during COVID-19, there are still some landlords who are trying to illegally evict tenants, and we cannot let that happen,” Council President Nury Martinez said.

The LAPD responded to 5,216 calls for service for landlord-tenant disputes from Jan. 1 – Sept. 1 of this year. The vast majority of calls came through the 77th Street Station, which covers neighborhoods such as Hyde Park, Vermont Square and Manchester Square.

The Los Angeles Tenant Union, a member-funded housing-rights organization, has resorted to organizing rapid response teams to stop illegal evictions and lockouts. On Sept. 23, the organization mobilized its Hollywood local division to support a tenant who was resisting eviction in the 1000 block of Beacon Ave. in Hollywood.

Landlords’ groups have argued that they too need governmental support. They maintain that many landlords own just a small number of properties, and that they need rental income to in turn pay their mortgage and property taxes.

How we did it: We examined data from the LAPD on service calls involving disputes between landlords and tenants from Jan. 1, 2020 – Sept. 1, 2020.

Interested in our data or have additional questions? Email us at askus@xtown.la.

This article was originally published on Crosstown.