Lindsay Young, assistant professor of communication, came to USC Annenberg last year, but she’s not new to Southern California. After earning her PhD from Northwestern University in 2014, she conducted her postdoctoral research while affiliated with the University of Chicago — but she’s done most of that work remotely while living in Los Angeles.

When she joined USC Annenberg as a full-time faculty member in September, her experience with virtual work was immediately relevant. “Zoom has been my world for a long time,” she said with a chuckle. “I was ahead of the curve.”

The nature of Young’s research was well suited to working remotely: She studies the effectiveness of HIV-prevention engagement in online communities of color, specifically the Facebook networks of young African American sexual minority men on the South Side of Chicago.

While she has a National Institutes of Health grant to complete three more years of research on the online networks of sexual minority men in Chicago, she also taught the courses “Public Communication Campaigns” in the Fall and “Quantitative Research Methods in Communication” in the Spring at USC — via Zoom, of course. “I feel very fortunate that I've gotten such wonderful students in my first year here,” she said. “They're incredibly patient and flexible.”

Young spoke with USC Annenberg about her commitment to the kind of research that makes an immediate, tangible impact on communities in need. 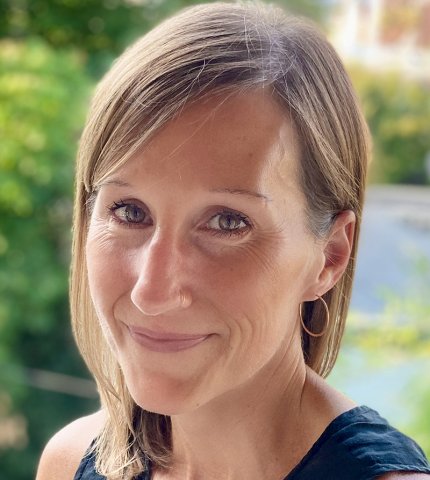 Lindsay Young.
You earned your doctorate in communication studies. How did you use that expertise during your postdoc at the University of Chicago?

At the medical school at the University of Chicago, I was part of a really robust and eclectic team of community workers, academics and social workers, who are solely dedicated to HIV-prevention work on the South Side of Chicago, particularly among young sexual minorities in the Black community. One of my main roles was implementing what we call a social network intervention: We identified, trained, and supported peer leaders in the community to spread awareness of and increase engagement with the HIV prevention pill Pre-xposure Prophylaxis, or PrEP, with members of their personal networks. Now, PrEP has become almost a commonplace thing, but a few years ago, there were very clear signs that PrEP awareness was not distributed equally.

What were those inequities, and how did you look to address them?

African American sexual minority men were simply not being reached with PrEP messaging from traditional sources like healthcare providers. Prior research told us that peers are important sources of information and influence for young adults and for members of marginalized communities, which is why we chose a social network intervention approach. So, my training in communication and social network methods became particularly useful for the development of an intervention that was inherently about health communication and social network processes.

Which online social networks did you study specifically?

Much of the data that I analyzed is oriented around understanding Facebook network dynamics. For example, in a cohort of about 600 sexual minority men of color, we found clear evidence that people who engaged in condomless sex were more likely to belong to the same Facebook groups. In other words, they were clustering around these groups. That’s a useful finding, because it gives us a sense of confidence that we could potentially intervene in these spaces as a place to promote PrEP as an alternative modality of HIV prevention.

So, you’re not just identifying and quantifying the problem, you’re taking steps to address it, right?

Absolutely. What I was most interested in learning was, okay, how do we take insights from these interesting and sometimes really sophisticated analyses that we do, and actually try to apply them in a proactive way? This mentality opens up the door to thinking about how we, as researchers and advocates for this community, can help build new networks or new online communities for individuals who could benefit from greater social support. For example, in one study we found that people living with HIV tended not to belong to the same Facebook groups. Given that peer support is extremely relevant for people living with HIV, creating Facebook groups specifically for people living with HIV may be a means to creating new spaces where this support can be provided.

Why is USC Annenberg the right place for you to continue your work?

I’m starting the second phase of my NIH grant, and to do that, I needed to also be full-time faculty. At USC, I’ll be able to complete the research I started at the University of Chicago and teach here at Annenberg, all the while working with an amazing community of scholars and students who share the same passion I have for health communication, communication networks, and community engaged research. Even before I was in the public health space, just as a communication scholar, I felt like, “Wow, my work would really fit in there.” But it was always like a pie-in-the-sky kind of ambition. I feel very lucky to be a part of USC Annenberg.

Now, my task is to live up to this privilege by putting my training to use in Los Angeles. COVID-19 has wreaked havoc in marginalized communities in Los Angeles, including the LGBTQIA+ community, and has brought our attention to a variety of other public health crises that also need attention, for example mental health. So, my hope is to make my research responsive to these and other salient health issues, while also helping communities strengthen resilience.