Latinos lose out when it comes to Hollywood films

As the summer movie season winds to a close, and the conversation around immigration continues to simmer, one place where audiences won’t find the Latino community is in popular films, according to a new study.

The report, titled “Latinos in Film: Erasure On Screen & Behind the Camera Across 1,200 Popular Movies,” is the most comprehensive and in-depth analysis of Latinos in film from Professor Stacy L. Smith and the USC Annenberg Inclusion Initiative, in partnership with National Association of Latino Independent Producers (NALIP) and Wise Entertainment. The study examined the prevalence of Latino characters on-screen across 1,200 top-grossing films from 2007 to 2018, as well as the presence of Latinos working behind the camera as directors, producers, and casting directors. An additional qualitative analysis explored stereotyping of Latino actors and characters across 200 top films from 2017 and 2018. 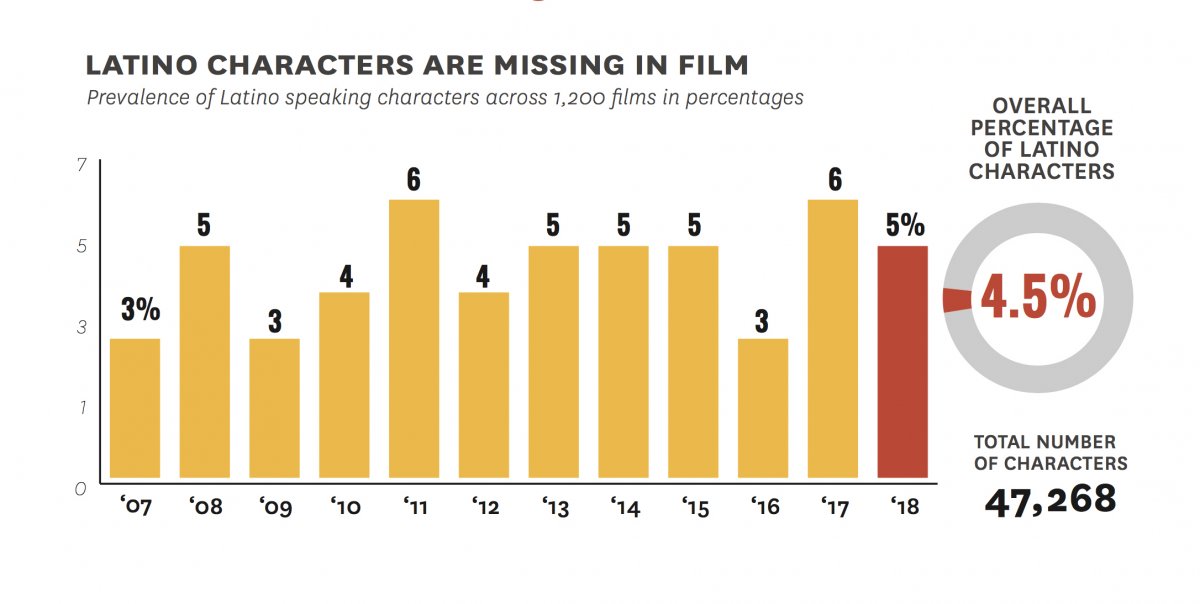 The findings demonstrate that top films lag far behind the population when it comes to representing Latino characters. Only 4.5% of all 47,268 speaking or named characters across the last 12 years were Latino, as were a mere 3% of lead or co-lead actors. There was no meaningful change over the time period examined. The lack of Latinos is startling, particularly given that 77% of U.S. states and territories have a population of Latinos greater than the percentage seen in Hollywood films.

“No matter which part of the film ecosystem we examined, Latinos were vastly underrepresented,” said Professor Smith. “This community represents nearly half of Angelenos, 39% of Californians, and 18% of the U.S. population. At a time where Latinos in our country are facing intense concerns over their safety, we urgently need to see the Latino community authentically and accurately represented throughout entertainment.”

Behind the camera, 4% of directors of these 1,200 films were Latino. The majority (71%) were international directors, while 29% were from the U.S. Only one director out of 1,335 examined was a Latina. Among producers, 3% were Latino, with the balance tilted toward men. Just 19 Latinas worked as producers across the 1,200 top movies of the last 12 years. As casting directors, Latinos are also rare. Yet the influence of Latinos in these positions is crucial to addressing gaps in representation. When a Latino was present in each of these roles, the presence of Latino characters increased significantly.

“The Latino community has not been prioritized, and it is imperative that we shed light on the glaring reality of Latino representation in film," said Benjamin Lopez, Executive Director of NALIP. “NALIP has positioned itself to be the elegant solution to this complex problem through our commitment to building the pipeline of Latino talent and sustainable development in the industry. Professor Smith’s research must guide decision-makers to the conclusion that there is immense value in collaborating with and investing in the Latino community.”

No better example of the lack of Latino community depicted in film exists than when the findings regarding leading Latina characters are reviewed. While roughly half of the Latino leads or co-leads were women, five of the 17 leading ladies were played by Cameron Diaz, and none placed her within a Latino community. The lack of leading characters whose Latino identity is part of the narrative fabric of top films means that audiences rarely see the cultural diversity of Latinos represented in storytelling. 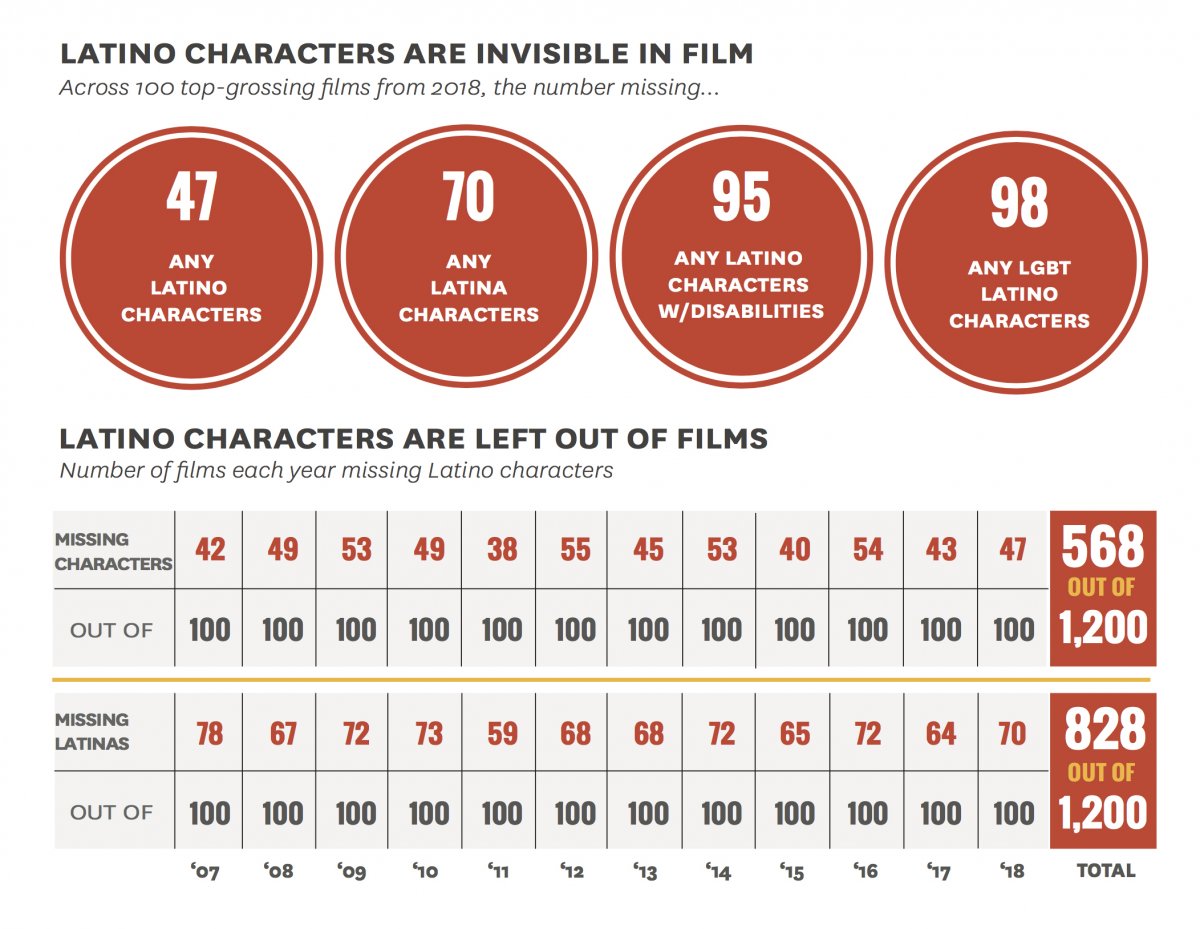 The report also documents the erasure of Latinos as characters in popular movies. Across the 100 top-grossing films of 2018, 47 were completely missing a speaking or named Latino character and 70 were missing Latinas. This compounds over time such that 568 movies out of 1,200 did not feature even one Latino character and 828 were devoid of Latinas. Looking at intersectional inclusion, 95 movies out of the 100 top films of 2018 did not feature a Latino character with a disability and 98 were missing Latinos from the LGBT community.

“The erasure of the Latino community in film creates a void that has been allowed to be filled by hateful and violent rhetoric,” said Mauricio Mota, Co-President of Wise Entertainment and producer of the Emmy-nominated series East Los High. “It is imperative that the talented storytellers from our community are given opportunities to tell the diverse and vibrant narratives of the Latino audience.”

Finally, the report offers solutions for change across casting, building a pipeline for Latino filmmakers, and urges companies to hire Latino talent for advertising and other forms of storytelling. Drawing on the Initiative’s expertise and opportunities across industry sectors, the report provides guidance to practitioners, advocates, and creators regarding increasing Latino representation on screen and behind the camera.

“Latinos in Film” is the latest study from the Annenberg Inclusion Initiative, and can be found online here.