On Wednesday, Wallis Annenberg Hall had its grand opening ceremony and reception to commemorate the completion of the building and to showcase its exciting new features. The ceremony gathered a large number of trustees and spectators who came to support the expansion of the new USC Annenberg building. Dean Ernest Wilson opened the occasion by looking back to a moment he shared with philanthropist Wallis Annenberg. “In 2010, Wallis Annenberg and I began a conversation,” Wilson said. “We reflected together on the importance of journalism and communication for the future of democracy in the United States of America. She described her deep commitment to the eternal values to openness, inclusion and transparency. This conversation that we had spread to the Annenberg community as a whole.” USC President C. L. Max Nikias thanked Annenberg for her generosity and continual support for the field of journalism. Annenberg then took the podium and stated that she couldn’t think of a more worthy investment. At the reception, hundreds of guests were invited to take a tour throughout the massive 88,000-square-foot building to get a sneak peak at the tools USC Annenberg students use on a regular basis. On every level of ANN, guests were welcomed to walk in and view facilities like the media center where they had a chance to see students at work. Since the commencement of classes in late August, students have become familiar with the new amenities that have been instrumental to their education. The media center is particularly a favorite among USC Annenberg students, and Maritza Moulite, M.S. journalism, reasoned that  it is the emphasis of the new space. “The media center is the point of the building,” Moulite said. “The point is to get more comfortable with the idea of continually working together and feeding off of different outlets.” The media center is home to three Annenberg organizations, which include ARN, ATVN and Neon Tommy. This has allowed students to work collectively and learn from each other. Maritza and her sister Jessica Moulite, M.S. journalism, attended the reception and sat watching the spectators from the building’s forum. Both students devote an eight-hour shift once a week to work on news assignments in the media center. They develop stories for several Annenberg organizations within the facility. Jessica explained that she recently went to the Superior Court of Los Angeles to cover an event for Hispanic heritage month. She was thrilled to produce a story on that event for ATVN and ARN. “It’s just cool to see how I’m able to use the different resources at the school to tell as many stories as I can,” Jessica said. 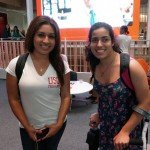 Mirian Fuentes and Kate Guarino, left to right respectively, express what they admire about the new building during the Wallis Annenberg Hall grand opening reception.

Similarly, Mirian Fuentes, second year broadcast student, dedicates four hours each week to ATVN as part of her broadcast class requirement. Fuentes explained that she likes the practicality of applying what she’s learned in her broadcast class to ATVN. “I really like this new building and it’s a reminder that we’re up to date on where we’re suppose to be,” Fuentes said. Fuentes met with her friend Kate Guarino, a second year print journalism student, in the building’s forum. They both stood in front of the new media wall that was recently placed in the forum in preparation for the grand opening. Guarino has favoredthe amount of space the new building offers, and she particularly likes the collaboration opportunities she’s faced. “I work in Intersections of South LA, so I’m not in the media center as much but I think it’s interesting how we can pull our resources,”Guarino said. “If Intersections has a South LA story that they want to collaborate with Neon Tommy, all we have to do is go right in here.” Nevertheless, Annenberg students are not the only individuals that have taken advantage of the new building and what it has to offer. Other USC students have visited the site to study or to simply admire its architectural design. Daniel Huang, fourth year civil engineer student, has frequently visited the ANN building to study on its second or third floors, but what has drawn him is the aesthetically pleasing qualities of Wallis Annenberg Hall. “I really like the atrium and all the windows since they let a lot of light into the building,” Huang said. “Its makes for a warm and lively environment to study in and having that kind of environment helps me stay focused.” 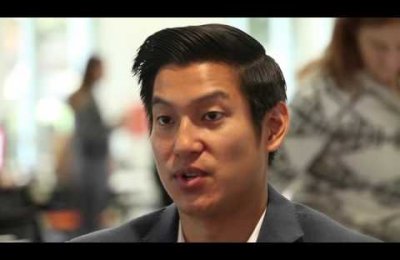