Willow Bay, this year’s recipient of the LA Press Club’s Lifetime Achievement Award, always wanted to be a journalist — it’s just that life took a few detours first. After a modeling career and an MBA from New York University, she finally got around to doing what she really wanted to do: reporting. Like so many others, she got in on the ground floor, working her way into — and out of — some jobs at small cable channels before getting her first big break on the NBC show “NBA Inside Stuff.”

She went on to work for CNN, ABC, NBC, MSNBC and Bloomberg TV, interviewing world leaders, CEOs and the Dalai Lama. She wrote a book about how to talk to your kids about serious news events, post 9/11. Then she joined The Huffington Post, to help expand even further the reach of that digital news machine.

Here, she explains how journalism still connects all the dots. And we learn how her advice for students brings it all full circle.

Your most recent move was from the newsroom to the classroom, and you now run the USC Annenberg School of Journalism. What motivated you to make that change?

I can’t imagine a more exciting time to begin a career in journalism. Or a more exciting time to be here on campus, as we settle into Wallis Annenberg Hall, with its state of the art Media Center. It’s a newsroom, a classroom and an incubator all in one, allowing students to create, publish and promote journalism content across multiple platforms. Helping students navigate the profound changes reshaping the media business, establishing the technological, ethical, and intellectual fundamentals for their future careers, and preparing them to lead the industry forward — now that’s an interesting job!

Was there something in your personal life that made this a good time for that move?

Well, my husband was considering retirement, and it seemed like the perfect time for me to dive headlong into a challenging and time-consuming new job. However, once I decided to take the position, he decided to defer his retirement for a few years, so here we are! I will say that I have two teenage boys who are not entirely unhappy that their mother is very, very busy when they get home from school. 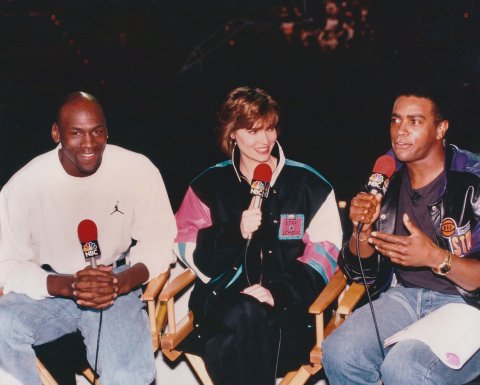 Courtesy of Willow Bay
Take us through your career — all of your careers so far.

I wanted to be a reporter from the time I was a kid. An interview for an editorial internship at Seventeen magazine led me to a career in modeling, which paid for college and graduate school. When I was finishing my MBA degree I knew I didn’t want to work on Wall Street, which was the typical path for NYU Stern grads, but I did want to pursue a career in business.

Yet, I also still really wanted to see if I could be a reporter. So I gave myself a year. I kicked around in some really bad cable jobs, got some decent live broadcasting experience and was ultimately hired by the National Basketball Association to co-host a pioneering new television program that took viewers behind the scenes, introducing them to the lives of players off the court, and allowing us to tell their stories in a personal and significant way. That show was called “Inside Stuff.”

So, back up a little bit. What drew you to journalism?

I was always a strong writer, but I also really liked unearthing new information and sharing people’s stories. Being a reporter was the closest thing I could get to being in school all the time, where you constantly learn and process new information, put it in context and present it.

You have wound up in places where women were scarce — first sports, then business. What was the environment like when you first started covering sports in 1991?

The doors had been opened by a generation of women pioneers who preceded us. In news, Barbara Walters. In sports, Lesley Visser and others. I was part of a generation that earned a place in the newsroom and proved our capabilities on air but did not have to fight our way in. We all owe those women who preceded us an enormous amount of gratitude. We became part of a generation of broadcasters who normalized the presence of women on air in sports and business. That said, it wasn't always pretty. Remember "the money-honey" nickname? Or the fact that Hannah Storm and I became interchangeable in the minds of some, those “girls” who covered the NBA?

And today, when I consider that the School of Journalism has a majority female student body, it's clear just how much change we've seen in opportunities for women in news. Now it's my job to help position those young women to lead news organizations of the future.

Well, in financial news I was often told that investors — meaning men — didn’t want to get bad financial news from a woman. When my male co-anchor was out on vacation and a woman filled in for him, our senior producers worried that investors wouldn’t like to get their business news from two women sitting side by side at the desk. Turns out, investors didn’t much care.

And the attitudes of the executives in sports?

Look, I was really lucky to have worked at the NBA for David Stern and then with Adam Silver, and they were incredibly supportive of women. When NBA Commissioner Stern hired me, he said, “We’re considering you and another woman, and you’re both OK on television, but you have an MBA so we’re going to go with you, because if the TV thing doesn’t work out, we’ll put you to work in the marketing department.” 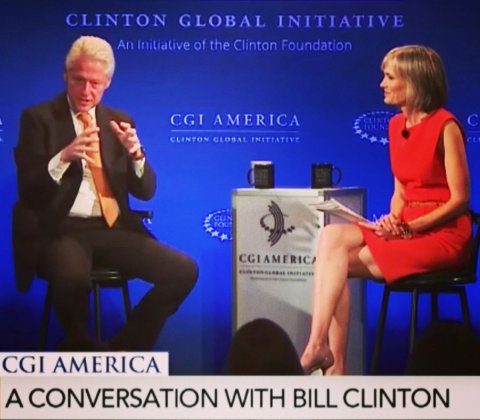 I think news executives in those days tended to be more narrow-minded. That wasn’t limited to gender. If you covered sports, you couldn’t do news. Or if you did general news, you couldn’t cover business news. After I left ABC to co-anchor CNN’s “Moneyline,” and had the opportunity to interview Fortune 500 CEOs virtually every night, people said, “Wow, I didn’t know she could do that.” Of course, lots of reporters prove they are versatile when given the opportunity.

How did you make the leap from sports to news?

I didn’t stay at “Inside Stuff” because I knew I didn’t want to be a sportscaster. As much as I loved that show and loved covering the NBA, I really wanted to be in news. So I worked for “Good Morning America” on the weekends. When I moved to CNN to co-anchor “CNN & Entertainment Weekly,” I talked myself into a business-news show. And they were launching a show based on Fortune magazine. And I said, “Why can’t I do that show?” And they said, “You already have a show.” Well, I’m the only one on the team with an MBA, and I’m a woman, so you know I’m going to work twice as hard. Why can’t I do two shows? And they said, “OK, put it that way, sure!” So I did. That led me to “Moneyline.”

Fast-forward a few years to The Huffington Post. In the midst of all the disruption in the news industry, you headed to purely digital outlet.

It was the moment when Arianna Huffington was planning to expand The Huffington Post from politics and front page to other verticals that included lifestyle and entertainment, business and media, and I joined to help her and Ken Lerer manage that expansion on the West Coast.

What was it like moving from a traditional broadcast background into digital?

The transition that was more dramatic was going from legacy media to a start-up. And it truly was the culture of a startup — it was reflected in everything we did. Growth was off the charts, so managing and keeping up with that growth and then driving it was a significant function of everybody’s job. Our roles and responsibilities changed constantly. It also required working with a small army of 20-somethings. Lots and lots of 20-somethings!

Which brings us to how all of this led you to Annenberg.

I saw a real opportunity to equip students — not just with the skillsets they need, which these days is sizeable — but also with the mindset that’s entrepreneurial and risk-taking. Because I want to see our graduates not only go out and change the world with their reporting, but also to change the world of journalism. I want to see the future of journalism in the hands of journalists, rather than technologists, who are our partners, or big media companies, who are our funders.

What kind of future are the students going to have?

I think the future is exciting for our students, in terms of the stories that they can cover, the impact they can have, and the tools they use to do both of those things. The business models of the future are still evolving, but I’m an optimist. 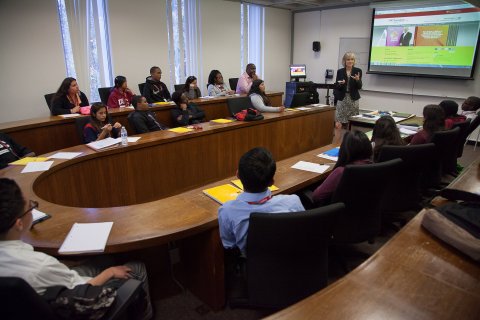 Willow Bay speaks to students from various South LA high schools as they attend an intensive three-week course designed to show them the types of programs offered at USC Annenberg.
USC Annenberg / Brett Van Ort
What is the most important thing for them to learn?

When I look at a journalism degree and what we teach right now, it equips students to engage with the world around them in a meaningful way. They discover stories, research issues thoroughly, vet that research, contextualize it, and present information in a clear, accurate and compelling way. And today, they engage with audiences around those stories. Beyond journalism, that skillset is invaluable today. Clear, concise, accurate, effective communicators — every industry needs them.

What work advice do you have for students?

With every role, assignment or job that’s in front of you, just pour your heart and soul into it. You will never go wrong when you do that. And really, the job itself ends up being way less relevant than what you put into that job.

It used to be that careers were looked at as ladders and very linear. Today, it’s almost the reverse. I may have been a little ahead of the curve in having multiple careers. But today, it matters more that you embrace and seize upon the opportunities that you feel passionate or curious about. To give it all a try. There’s no reason not to.