Murray Fromson, renowned international news reporter, beloved professor emeritus of journalism and esteemed former director of USC Annenberg’s School of Journalism, died on June 9 at the age of 88. An award-winning journalist and a dedicated mentor to hundreds of students, Fromson was a staunch advocate for freedom of the press and journalism ethics, fighting tirelessly for journalists worldwide who often put their lives on the line to ensure a well-informed public.

Fromson was a longtime CBS News correspondent and Associated Press reporter before joining USC Annenberg in 1982. Reporting from around the globe, he covered major historical events, including both the Korean and Vietnam Wars, the 1965 war between India and Pakistan, the Tet Offensive in Saigon, the defeat of the U.S.-backed government in Cambodia by the Khmer Rouge, and the Civil Rights movement in the southern United States. He and his CBS colleagues were awarded two Overseas Press Club awards for their reporting on the fall of Saigon in 1975.

“Not only was Professor Fromson one of the great journalists of his time, he was also an extraordinary teacher and leader who will be greatly missed,” said Willow Bay, dean of USC Annenberg. “His legacy will continue to live on at USC Annenberg, especially among his students in whom Murray instilled an indelible sense of integrity and ethics for the profession.”

Fromson served as a founding member of the Reporters Committee for Freedom of the Press and for decades represented individual journalists and their First Amendment rights.

In a 2014 post for the Huffington Post, Fromson recalled his involvement with the committee’s formation in 1969 when the Nixon administration threatened to subpoena journalists and force them to name confidential sources considered anti-war activists.

“I vowed that I would go to jail rather than reveal my sources,” he writes. “Over a Sunday breakfast at my home, the late J. Anthony Lukas of the New York Times agreed with me, and we fanned out across the country to contact approximately 30 fellow journalists. Thanks to the willingness of Samuel Dash, University of Maryland professor, who made a campus meeting site available to us, and the enthusiastic presence of the late Ben Bradlee, the distinguished editor of the Washington Post, we agreed to form the Reporters’ Committee for Freedom of the Press. That was almost 50 years ago. It has gone as far as the U.S. Supreme Court to appeal threats that jeopardize the independence of journalists everywhere.”

Following his broadcast journalism career, Fromson served as deputy campaign manager for California Governor Edmund G. Brown in 1978 and, the following year, as a consultant to the president of the University of California’s Systemwide Administration. From 1980 to 1983, he was moderator of a statewide television program on PBS stations called California Week in Review. He also was the producer of a nationally syndicated program, Eric Sevareid's Chronicle.

Upon his arrival at USC in 1982, Fromson founded and directed the Center for International Journalism at USC for seven years, recruiting more than 100 working journalists to earn master’s degrees with a specialization in reporting on Cuba, Mexico and other Latin American nations. He also sensitized them in reporting on politics in the U.S. and the world.

“Murray singlehandedly built the international journalism program,” said Joe Saltzman, professor of journalism. “It was a huge success for many years. Murray cared about students and his colleagues, but most of all he cared about people and, like a great journalist, was always interested in who they were and what they did and how they felt about the world in which they lived. He was one of the kindest, nicest gentlemen — in the best sense of the word — and it was my privilege to know him.”

In 2000, Fromson was named a fellow in Harvard University’s Shorenstein Center on Media, Politics and Public Policy. He also served as a judge for the Pulitzer Prizes in journalism in 2003 and 2004 as well as a judge for many years in the history, current events and biography categories for the Los Angeles Times Book Prizes.

Following his appointment as director of the School of Journalism from 1994 to 1999 and his retirement from USC, Fromson continued to write opinion pieces for U.S. newspapers and the Huffington Post and worked on his memoir about the Cold War.

“Readers and viewers who benefited from Murray’s insightful and courageous reporting will miss him deeply, as will generations of USC students who are now carrying on in his great tradition,” said Geoffrey Cowan, USC University Professor and former dean of USC Annenberg. “But in an era when journalists around the world are under attack, citizens everywhere will continue to benefit from his important role as a journalism educator and visionary and as a founder of the Reporters Committee for Freedom of the Press.”

As part of his retirement celebration in 2006, several of his past students praised and thanked their teacher, mentor and friend.

Dan Browning ’90, now a reporter with the Minneapolis Star Tribune, recalled his time with Fromson while a fellow in the Center for International Journalism. Fromson, he said, made sure his students got interviews with newsmakers, he took them dancing in Havana, and he helped his students get jobs. Browning also fondly noted that Fromson attended his wedding in St. Louis.

“I don’t believe he ever asked for anything in return except that we do good journalism,” Browning said.

Even after graduating, Benjamin Sand ’04, now based in Beijing for the second time, said Fromson never stopped being there for him.

Trish O’Kane ’88, called Fromson a “meta-mentor” and credited him with guiding her toward a career in human rights journalism, activism and teaching.

“In addition to all the doors he opened to me, Murray has taught me one life lesson as a teacher: Show your students that you care,” said O’Kane, lecturer in the University of Vermont’s Rubenstein School of Environment and Natural Resources.

Frank Buckley ’87, co-anchor of KTLA Morning News in Los Angeles, said that students who have been touched by Fromson over the years might liken his role in their lives to that of a parent.

“In the way that a parent teaches a child right from wrong, you taught us right from wrong in journalism,” Buckley said. “And I still hear your voice. You taught us. You reached us. And we will keep teaching what we learned from you to the next generation and we will try to do it right.”

Fromson is survived by his wife, Dodi; his daughter, Aliza; and his son, Derek. 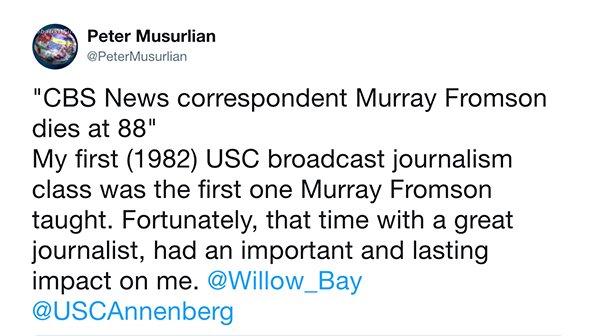 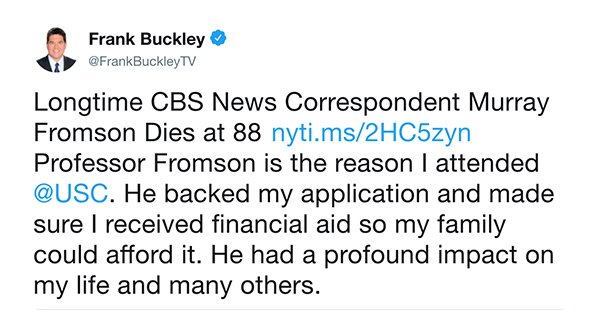