YouTube's M{2e} residency looks to the future of digital storytelling

Every year, USC Annenberg’s Media, Economics & Entrepreneurship (M{2e}) program welcomes a notable figure as its Innovator-in-Residence. Past innovators have come from companies like Facebook, Viacom and Microsoft. This year, however, the innovator was not a person, but a media company.

On Feb. 8, USC Annenberg welcomed YouTube for a series of workshops and discussions on the current media landscape and the future of digital content creation.

“YouTube is the perfect lens through which to look at all of that because as a platform it has completely redefined what a media company can be, what it takes to create a media company,” professor and M{2e} co-director Gabriel Kahn said.

YouTube hit M{2e}’s “sweet spot” because the program looks at media through an economic lens and tries to discern how new technologies will shape businesses. Kahn, who co-organized the week's events with professor and M{2e} co-director Chris Smith, said YouTube’s presence forced USC Annenberg to “confront some hard truths about media, which is how absolutely disruptive technology can be.”

The residency kicked off Feb. 8 with a 360-video workshop led by Tom Small, who teaches virtual reality in YouTube’s Creator Lab. Small walked attendees through the designing, shooting and editing processes of creating content with 360-video — a “disruptive computer interface,” as Small would describe it.

When producing content with 360-video, creators have to give up control of the narrative, Kahn pointed out.

“You kind of have to relinquish that role and give it to the audience, which means you have reconsider the story being told,” Kahn said.

“Our job is to create awesome storytellers,” Lance Podell, the director and global head of YouTube Spaces, said at a panel Tuesday night, Feb. 9.

The panel, which also included Timothy Shey, head of original scripted content at YouTube; Colette Patnaude, talent manager at Big Frame; and Wesley Chan and Philip Wang, founders of Wong Fu Productions, discussed the evolution of YouTube — including the launch of YouTube Spaces — and its content producers, many of whom have been able to build their own media businesses on the platform.

YouTube Spaces is a division of YouTube that works with creators to elevate content on the site by providing instruction — through more than 35 different classes — and equipment, as well as encouraging collaboration among talent. The division is a reflection of increased ambition by creators and a representation of the company’s commitment to them, Podell told the students and faculty crowding the lobby of Wallis Annenberg Hall.

Kahn, who moderated the panel, posed the question: Who thinks they could go a week without turning on an actual television? Almost every hand went up, which bodes well for YouTube Red and other streaming services. 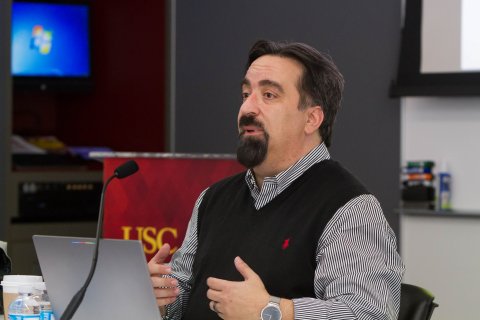 When they launched the app last year, D’Angelo’s concern was that there would an influx of creators who wanted to produce content for children with very little experience.

“The hardest thing I’ve ever had to produce is children’s educational content,” D’Angelo said. “It needs to be very specific and very correct.”

YouTube currently curates a lot of content from companies like PBS and BBC, because they can ensure that the videos are appropriate and accurate. They want to bring more children’s content creators into YouTube Spaces but the challenge is enforcing certain guidelines without stifling creativity.

On Wednesday evening, the conversation shifted to encouraging creativity in sports media.

Vlastelica said the idea grew out of a desire “to put Fox Sports where the audience was moving,” which was online. He and his team asked themselves: Who works well on platforms like YouTube? The answer was people who care deeply about the content and the audience who sees it.

“Our challenge was to find that talent and that new format first,” Vlastelica said.

After six months of tinkering, they came up with @TheBuzzer. It’s filmed and edited into short, shareable clips — tailored to numerous platforms — and it includes captions for when they are viewed silently.

In addition to @TheBuzzer, Fox Sports films their television programming in a way that enables the digital team to put it online. They found that clips from shows like Katie Nolan’s “Garbage Time” — which received big laughs and nods of approval when they were shown during the class — have more impact when they’re shared on YouTube and various social media platforms. 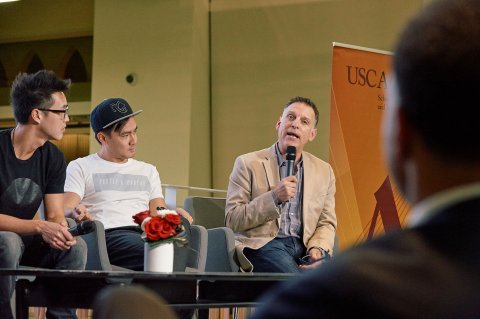 Lance Podell, global head of YouTube Spaces, talks to a room full of USC Annenberg students and faculty.
USC Annenberg / Seth Hancock
Youtube’s position as a power player in the future of media, which Youtube predicts will be dominated by digital content, was also the topic of a keynote address by Podell, presented by Smith, on Thursday, Feb.11.

“Digital video is immersive,” Podell said. “It will grow even faster because it can create a much more immersive and interactive experience than TV.”

His address was followed by an evening workshop where students worked with Valerie Streit, the Senior Creative Insights Manager at YouTube and Google, to design a digital news program that ignored the format of traditional media.

“We’re really trying to think about what video news would look like if you invented it today, if you didn’t have the legacy of a broadcast with an anchor and reporters,” Kahn said.

YouTube’s residency wraps this Friday, Feb. 19, when The Young Turks, one of YouTube’s most popular news shows, take over the Media Center for their daily broadcast.

“For YouTube, this is really an opportunity to spend some time with younger people who are actively engaged in the act of content creation,” Kahn said.

Youtube moves to fun sized ads: The changing nature of video advertising in the digital landscape
Technological Trends in 2017: What Are the Future Breakthroughs Part I
Photos: Annenberg Career Development at YouTube Space LA
USC Annenberg's JOVRNALISM team captures the presidential inauguration in 360
Quoted: Robert Hernandez on what VR means for journalism, and more
Quoted: Professor Sandy Tolan reporting from Standing Rock, and more
Professor Robert Hernandez and his JOVRNALISM team partner with ProPublica and The Texas Tribune to head off a large-scale disaster