A digital journalist with big dreams

A quick look at Sebastian Vega’s Instagram page tells you a lot about this broadcast and digital journalism student who is set to graduate on May 11.

He’s a great photographer, loves art and music, has a strong social conscience, is a Trojan football fan, and is clearly comfortable as a reporter.

Vega entered USC Annenberg as a spring admit, prepared to push the boundaries of storytelling and news distribution. His life leading up to USC prepared him to not wait for something to happen, but instead make his own opportunities.

Born in San Antonio, Texas, Vega was raised by a single mother.

“My mom couldn’t work, so we lived off government support and food stamps. During high school, a lot of my peers were able to take SAT prep tests, but I couldn’t afford them,” he said. “But, I was able to get a waiver on the actual test fee, so I took the exam a few times to make sure my score was as high as it needed to be.”

He then researched and applied for a variety of scholarships to make sure that he could attend the best college and ended up receiving the prestigious Gates Millennium Scholarship.

Once on campus, his first stop was the Daily Trojan. He started as a staff writer and by the beginning of his sophomore year, he was promoted to news editor. At the same time, Vega was asked to produce social videos for the JEDI desk (Journalism for Emerging and Digital Innovation), a newly formed team at Annenberg Media, led by instructors Amara Aguilar and Rebecca Haggerty.

“I remember saying ‘I have no idea what any of this is.’ I was more interested in broadcast,” Vega said, “but my friend reassured me this was the future of TV.”

This new digital experience earned him another promotion at the Daily Trojan, where he became digital managing editor. He took some time away from JEDI, but by junior year was recruited back as a lead. He stayed for the entire year, overseeing the creation of more than 150 social videos. 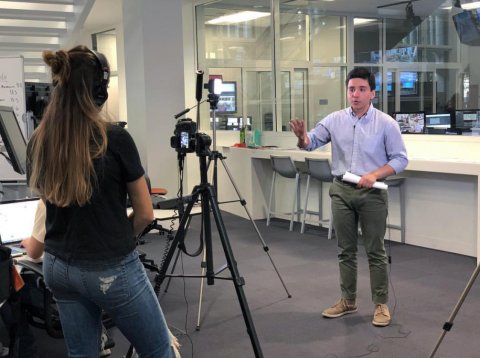 Vega hosting Snapchat news show inside the Media Center.
“I was in the Media Center a lot,” he recalls, “Probably every single day, and it was a really big operation — there was no social editors but us.”

“That was the biggest challenge I’ve faced here because there were so many things to be thinking about,” Vega added. “All of these news stories were going on so many different platforms. We were a team that worked on emerging storytelling projects. At the time, Snapchat and Instagram were very new and we were figuring out how to talk about news on these platforms.”

By his senior year, Vega was looking for a new challenge and was asked to take on the role of executive editor at Annenberg Media.

As executive editor, Vega reorganized Annenberg Media, overseeing the addition of multiple news teams, such as the social editor desk, and the implementation of workflows which support social content production throughout the Media Center. Instead of creating content, he was now directing roughly 40 editors.

“It was now my job to manage and teach the concepts about social videos that we’ve been learning over the past year or so,” he said. “I helped transition the media center into being platform agnostic and spent my senior year doing that.”

During all of this, Vega had the support of a number of professors who both believed in him and kept pushing him to succeed, most notably Laura Davis, assistant professor of professional practice.

“Laura Davis, who was essentially my boss, definitely sealed things together for me,” Vega said. “She provided knowledge in social publishing and instilled a lot of the principles we uphold into this newsroom.”

For Vega, when the school year was over, the summer wasn’t a time to slow down. He filled each break with internship opportunities. His sophomore year, he interned with a KNBC reporter, writing scripts and creating social videos for Instagram. The following summer he worked at NBC Nightly News.

“At NBC Nightly News they let me create a social video and it got 30,000,000 views and they were like, ‘Hey, can you make more videos for us?’” Vega said. “I got to test out some of the skills I was learning in class — take them to a professional level and also understand how a modern newsroom works and how I can use my skills in those kinds of newsrooms.”

Another opportunity that USC Annenberg afforded Vega was an invitation to the Maymester program in New York. “I was able to talk to some of the biggest leaders in the industry. It was extremely helpful because it answered a lot of misconceptions I had about the field,” Vega said.

It was following up on a connection he made during that Maymester that eventually led to his summer fellowship at the New York Times Student Journalism Institute and then now, as he prepares to graduate, a job as a social media editor intern.

As he reflects on his time at USC Annenberg, Vega realizes that he was given one opportunity that most students don’t get at any school. “I had the chance to work on both sides — as both a content creator and then a manager. I learned the business side of journalism, how to make a newsroom more efficient and most importantly, the distribution and evolution of how we are going to tell news stories moving forward in the future.”