Throughout the year, young women across the university gather in a USC Annenberg conference room to bond together, to learn from each other, and to plan and design events that bring in influential women leaders from diverse fields to inspire them.

They are part of the Women’s Leadership Society (WLS), which was established after Christopher Smith, clinical professor of communication, observed that male guest speakers in his courses were “surprised” by how many women populated his classes. “It was if they didn’t expect to be ‘passing the baton,’ so to speak, across gender lines,” said Smith, who also directs USC Annenberg’s Media, Economics and Entrepreneurship program (M{2e}).

It was those unspoken assumptions that Smith sought to address. “Ultimately, I decided to leverage M{2e}’s position at the leading edge of next-generation media, to create a professional development platform that would expose our female students to a range of possible leadership paths worthy of their pursuit,” he said.

“The sweet spot where the Women’s Leadership Society really exists and thrives is with bringing in female speakers to talk to us about working at the intersection of technology, media and entertainment,” added Briana Grubb, a senior majoring in communication with minors in media, economics and entrepreneurship, and technology commercialization.

Grubb currently co-directs WLS with Andie Wright, a senior majoring in public relations with a minor in entrepreneurship. They succeed inaugural co-directors Lauren Bickford and Celestine Yeh, both communication majors who graduated in 2018, who were the first to lead the group once it formally convened in Fall 2016.

Since its initial conception in 2014, the organization, which is open to all USC students, has grown to 119 members. Grubb and Wright are continuing to focus on WLS’ social media presence on Facebook, Twitter and Instagram to help spread awareness around their efforts to promote events throughout the semester. 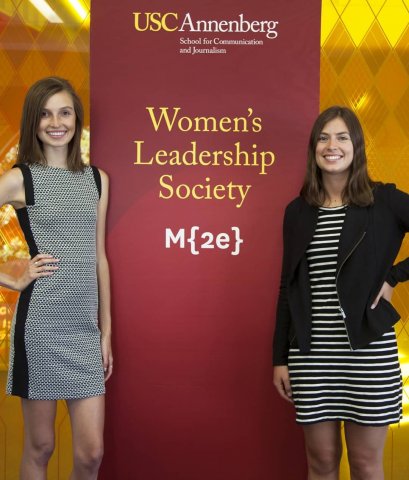 Andie Wright and Briana Grubb are co-directors of the Women’s Leadership Society.
Photo by: Olivia Mowry
“Everything we do at WLS is a group effort,” Grubb said. “A lot of our work is pinning down which businesses and industries our members are interested in so that we can get in contact with the right people. We’re all going out into the world together, so it’s a great place to form these connections now.”

Grubb and Wright emphasized how reaffirming it is to meet female leaders, hear about their career paths and how hard they worked to get where they are.

“Tech, media and entertainment industries, have been male-dominated for so long and if you know someone, it’s easier to get in the door,” Wright said. “It’s crucial for women to set up these connections at the pre-professional stage before we enter the workforce.”

This past year, WLS hosted a wide-range of high-profile speakers, including the executive team at Reese Witherspoon’s media company, Hello Sunshine. Grubb and Wright, along with their WLS team, planned the event and composed questions for the panel discussion.

“The Hello Sunshine team stressed excellence and choosing the stories you want to elevate,” Wright said. “They said you have to be passionate about your work and it has to be what you love. People will come to it, it’ll happen. You can’t be selling just to sell.”

Grubb and Wright underscored how the marketing and public relations expertise they are developing through their USC Annenberg classes has helped them build a growing audience for their events and increased attendance at their meetings. Grubb said her coursework has also helped her when leading discussions with WLS event speakers.

“I’m taking argumentation and public speaking classes and they have really prepared me to do research on whomever I’m speaking to on stage,” she said. “I can really be part of the conversation in a thoughtful, impactful way.”

Doing their research was also key for Grubb and Wright when Dean Willow Bay invited them to participate in the keynote conversation she moderated with Gwyneth Paltrow for Athena, a women’s entrepreneurship summit held on USC’s University Park campus this past Fall.  The co-directors had the opportunity to pose several questions to the self-made lifestyle guru of Goop.

“It was so encouraging to hear that at any point you can decide how you want to live your life, and no one can stop you but yourself,” Wright said.

“WLS is about women empowering women,” Wright said. “We compose roughly 70 percent of USC Annenberg’s student population. We’re in this together and I think the more we come together and support each other, the easier it’s going to be to for us to speak out and build those connections. We’re going to be unstoppable.”

Additional contributions to this piece were made by Katharine Lamattina.