A four-week intensive summer program held on campus, AYA was designed to give underrepresented and underserved high school youth exposure to condensed first-year college courses in communication, journalism, public relations and civic engagement. Under the instruction of USC Annenberg faculty and industry experts, students are exposed to theories behind media and are given many opportunities for hands-on training. Over the course of the program, they learn web development, video editing, podcasting, photography and news writing.

Now in its third year, AYA has welcomed 78 high school students in total; to date, four students, Julio Martinez, Michael Tseng, Esther Cho and Jacob Tamkin, have been accepted. Jaime Carias, director of the program, said that all of the participants so far have gone on to college, and 14 are pursuing a degree in media.

“In order to diversify media, communication and journalism, we need to create a pipeline,” said Carias, who earned a master’s from USC Price in Public Policy. “We want students to gain the confidence and skillset to be able to create their own narratives and transform the obstacles and struggles they may have experienced into stories of grit and resiliency.”

For Martinez, the value of perseverance was a part of his upbringing.

At one point, Martinez’s mother worked three jobs to support his four siblings. This learned resiliency carried him through his childhood. He grew up watching sports reporters. “It was right in front of my face, but I never realized it could be a profession, or an area of study,” he said. “AYA introduced me to that.”

A highlight of the program, Martinez said, was writing an autobiographical poem. “It taught me the power and effectiveness of storytelling,” he said. “This project led me to ask myself difficult questions and made me dig into my cultural background.”

Carias said exercises like this are designed to strengthen critical thinking skills and challenge students to approach complex subjects in a new way.

In addition to on campus classroom lectures, students also take a variety of field trips.  One was to the California African American History Museum. Here, students were led by Taj Frazier, associate professor of communication, as they explored new ideas and topics, allowing them to draw comparisons between historical moments of the past and relate them to issues affecting communities today. “Professor Frazier also [pointed] to how the media can twist narratives by using negative words like ‘riot’ instead of ‘uprising,’” Martinez said. 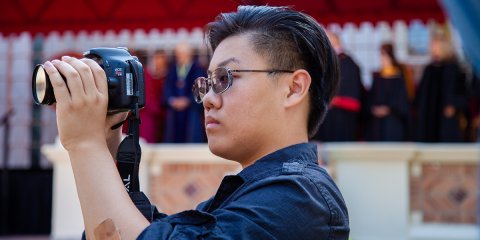 Michael Tseng is now a sophomore majoring in journalism. He returned for a visit this past summer to meet the newest cohorts.
Photo by: Olivia Mowry
Michael Tseng, a sophomore journalism major minoring in cinematic arts, remembers jumping at the opportunity when a director in one of his high school internships told him about the AYA program.

Tseng knew he wanted a career in journalism. He had been the editor of his middle school paper, contributed to Arcadia High School’s student-led publication, wrote for his local newspaper, and was part of a digital communications internship.

“I had been on college tours, but I always felt like a tourist,” Tseng said. “This was his chance to feel like a real student.” He had an hour and a half commute to campus, but said it was “well worth it.”

When Tseng stepped into the ATVN control room in the Annenberg Media Center two years ago — where he now spends 80 percent of his time — he was impressed. “If USC is putting this much effort into nurturing student journalists, then this program must be really good,” he said. “At AYA, they brought such a level of expertise that I never really expected was possible — it just kind of raised the bar of what kind of education you can get here.”

A Wallis Annenberg Scholarship and a Sewell Family Endowed Scholarship provided financial support for Tseng his first year at USC. “I love watching, critiquing and reviewing films, as well as shooting documentaries and newscasts,” he said. “I owe it to AYA — I always thought I was a print person, but now I want to be the one directing and producing shows.”

For journalism student Esther Cho ’23, AYA brought her valuable connections with her cohorts.

In the classes, she said, “They talked about issues of race, gender, and ethnicity. We also discussed the #MeToo movement, something we never [spoke] about in a school setting before.” Cho added, “We got to voice our opinions and talk about the world around us.”

Cho, who was introduced to journalism in middle school, wrote for an online social justice magazine. AYA taught her “The nuances of journalism — from podcasts to videos to photography — it was transformative,” she said.

In Cho’s year, one of the field trips that stood out for her was a visit to Little Tokyo. She and the students were tasked with photography and writing assignments — skills they had already learned from Miki Turner, assistant professor of professional practice. “I gained a lot of confidence stepping outside of my comfort zone. I got to talk to complete strangers, interview them on the streets and take their photo — I never thought I'd be able to do that before,” she said.

When Cho got into USC with a merit scholarship, she said she knew this was where she was supposed to be.

Jacob Tamkin, a freshman majoring in communication, attended AYA the summer of 2018 with the hope of turning his dream of being an investigative reporter into a reality. Tamkin told his parents, both USC alumni (one from USC Annenberg) that he wanted to follow the career of Anderson Cooper and report about politics and travel.

When he came to AYA, his interests expanded. “AYA gave me a good look into the field of photojournalism — I loved getting behind the camera, figuring out angles and learning how to tell a story through a picture,” he said. Tamkin also walked away with a broadened understanding of communication, thanks to Frazier.  “AYA really solidified that I wanted to attend USC,” he said. “I have always felt like a Trojan, but being here on campus made the [possibility] real.”

To close out each program, students present their final media projects at an exhibition, joined by USC Annenberg faculty, as well as their friends and family. Tseng took on the role of editor-in-chief of an online magazine that he and his team named The AYA Woke Times.  “I quickly learned what it meant to manage a newsroom — guiding reporters on a deadline, addressing edits, remaining organized and helping build a website,” he said.

“This experience showed me what it takes to not only be a journalist, but a leader,” he said. “If you want to stand out, you need to be able to lead. I think that was one of the most crucial things I learned at AYA.”

Carias says he always tells AYA students, “‘The day you enter to the day you leave, you will not be the same young person.’ It happens every year. They change, they grow and they return back to their high schools empowered seeing and understanding the world differently.”