Alumni and current students crowded around the news desk in Studio C of the media center during the 20th Anniversary celebration.
Photo by: Matthew Lin
Career Paths

Familiar faces joined new ones as alumni, faculty and students celebrated the 20th anniversary of the student-produced broadcast Annenberg TV News (ATVN) in a packed lobby of more than 200 people at Wallis Annenberg Hall.

ATVN has given students the opportunity to learn how to report, write, edit, produce, create graphics and direct shows that prepare them for a wide range of jobs in the professional world.

Stacy Scholder, professor of professional practice and director of ATVN, started out the festivities by reminding the group — who traveled from all over the country to be there — “Our students have covered it all. From presidential and local elections to wildfires, protests, marches, high-profile court cases, immigration, health care, border issues and, of course, issues right here at USC. I’m proud to say Annenberg TV News is still a training ground for students.” 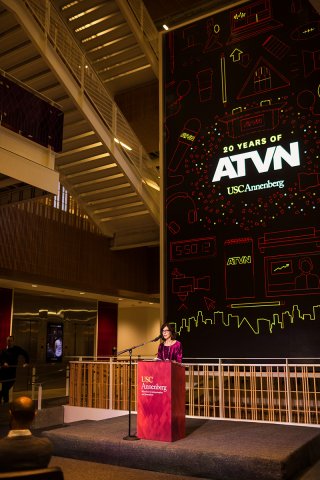 Stacy Scholder, the director of Annenberg TV News (ATVN) greets the more than 200 people who were there to celebrate the 20th anniversary of ATVN.
Photo by: Matthew Lin
One of the founding faculty of ATVN and the former director of the media center, Serena Cha, reminded the group that it was a small band of students in 1998 who wanted the newscast. “There were a few computers and cameras, and no professional software, but it didn’t matter. They took the first stab at broadcasting. To that first group, we owe so much,” Cha said. “They were full of fire and grit and we are all grateful to you, the beginners, the ones who started.”

Cha went on to congratulate the former students on how much they took this job seriously. “You could have said, ‘Well, we don’t need to have the 6 o’clock show. What if my story doesn’t make it? I don’t care.’ You never said that.”

As the crowd listened to former professors and classmates speak about their experiences at ATVN and watched news clips shot over the past 20 years, they reminisced about the busy work days and long hours in the newsroom. They also had a chance to tour the state-of-the-art media center, which opened in 2014.

“Tom Norris [newsroom coordinator] saved my ass so many times,” said alumna Leslie Marcus, now a show producer of The Doctors on CBS. “We’d be in the edit bay all hours of the night. He was annoying about when I was editing my pieces, but it’s a family.”

For many, ATVN was the start of their careers, allowing them to build the skills necessary to succeed in professional newsrooms.

“I was a shooter, producer, writer, editor, director,” said Shawna Thomas, who graduated with an M.A. in journalism in 2006 and is now the Washington D.C. bureau chief for Vice News. “That helped me get my first couple of jobs in news. But really the best thing is that all of those different parts that all of those students are doing — you get to help lead a newsroom to turn in an actual newscast at the end of the night, every night.”

As ATVN moves forward into its new decade, faculty, students and alumni continue to see it as a place of firsts.

Additional photos from event are available to view on Flickr.