USC Annenberg celebrated the conferral of bachelor’s, master’s and doctoral degrees to 844 students on May 15, as part of the University of Southern California’s 132nd commencement ceremonies.

More than 6,000 family members, alumni and friends of USC Annenberg gathered under high, stark white tents as a cool rain soaked campus. Parents bundled up in ponchos, and sheets of plastic covered baby strollers, as supporters gathered to snap photos and cheer on their graduates.

By noon, as new graduates heard their names announced and crossed the stages, the sun was shining.

“Class of 2015, it was your hard work, your discipline, your creativity that brought you to this moment of transformation,” Dean Wilson said, reviewing the narrative of each grad’s journey – admission, an engaged education with USC Annenberg faculty and, now, the conclusion.

“You will decide where you want to go, who you want to help, and you will act on those things,” Wilson said to graduates at the School of Journalism ceremony. “As you pursue your life’s dreams, as you pursue them with passion and a demand for truth and information in the public interest, write your own narrative. And as you do that, stay in touch with us.”

Bay noted that the class of 2015 made history, by ushering in a new era at USC Annenberg.

The school year brought a brand new, nine-month master’s degree program — the Journalism M.S. — and the opening of Wallis Annenberg Hall, a transformative building dedicated to digital media education, communication and production. Along with that, the class of 2015 was the first to see the opening of the cutting-edge Julie Chen/Leslie Moonves and CBS Media Center, a fully converged facility that is the hub of production in the new building.

Bay thanked graduates for helping shape a culture of innovation and collaboration — and for challenging conventional thinking. 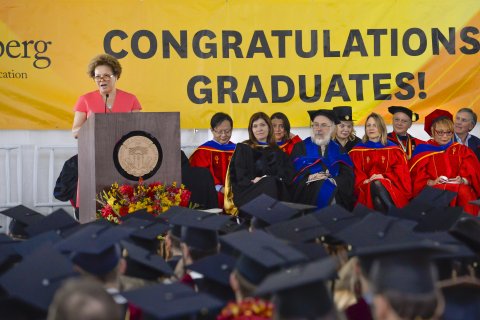 USC / Gus Ruelas
Drawing on material she uses in her culture and communication class, Banet-Weiser recalled a social theorist who writes about following not just common sense — but good sense.

“Our students at Annenberg get this, because they are intellectually curious and because, more importantly, they are imaginative,” she said. “This is what I know our students are equipped with, as they leave USC — the ability to look critically around them and to make difficult decisions.

“After all,” she added, “these students are not common. They are uncommon in the best possible way.”

Her remarks, delivered to those earning bachelor’s, master’s and doctoral degrees in communication, Communication Management, Global Communication and Public Diplomacy, also drew laughter. She confided that she’s plugged into popular culture thanks to her students, who have convinced her that watching reality TV is “real research.”

“I’m totally convinced of this,” she joked, drawing laughs and applause.

Lee delivered a personal message to graduates, from the perspective of a USC Annenberg mom. Her daughter, Ava Coleman, was one of the 500 School of Communication graduates celebrating commencement.

“To all of the parents in the audience today, I am one of you,” Lee said. “I know exactly how you’re feeling right now — equal parts pride, excitement and maybe a little anxiety.”

“Ava and all of her classmates are graduating from the prestigious Annenberg School for Communication and Journalism,” she added. “They will be more than OK. So, parents, relax and celebrate!”

From the perspective of a powerhouse in the entertainment communication field, Lee pushed grads to use their new responsibilities wisely and make the most of the influence it holds. The class of 2015 is part of a millennial generation that already is targeted for its digital media savvy and the economic power it wields, she said.

“You will be 50 percent of the workforce in 2020; you have a combined purchasing power of $2.4 trillion. … Because of your power, and because of your influence, everyone wants you. They want you to like them, retweet them or vote for them,” Lee said, citing research conducted by media companies including BET Networks, where she oversees several cable television networks, digital offerings and a home entertainment business.

“And because your generation is setting every trend, employers want you.”

Their generation also is unique in its diversity, Lee pointed out. “Your younger brothers and sisters barely know a world where a black man can’t be president, where a classmate doesn’t have two moms or two dads.”

“And they certainly don’t know a world where a woman can’t run a company, or a university or a country,” she said, as grads and their families cheered and applauded.

“The bottom line is that your generation will be the group that ends racism, sexism and all kinds of hatreds. You will do it,” she said, urging grads to volunteer with those fighting to eliminate injustice.

“And we are in a fight right now,” Lee added. “From Ferguson to Cleveland to Baltimore.”

The lesson learned from recent uprisings, she said, is there is still work to do in rooting out bias and hatred. And that there are vast groups who don’t believe the American dream belongs to them.

“As communicators, I encourage you to look for ways you can facilitate practical, dynamic and civil conversations about what’s going on across the country on all of our social issues. You can be the one who can bring all parties to the table for passionate, yet peaceful, discussions.”

And USC’s class of 2015 will always have the Trojan family behind it to help make its mark, Lee said.

“You’ll succeed and you’ll make your alma mater proud, because you are part of a legacy of excellence that is larger than you,” she said. “You are plugged into a progressive, dynamic, cosmopolitan network of incredible people whose vision and ideas have electrified the world.

“You have been well prepared, and when you step off of this campus, you will step into a world of possibility. And if no one ever tells you, remember that I told you: you are the power, you are enough and you are the change.” 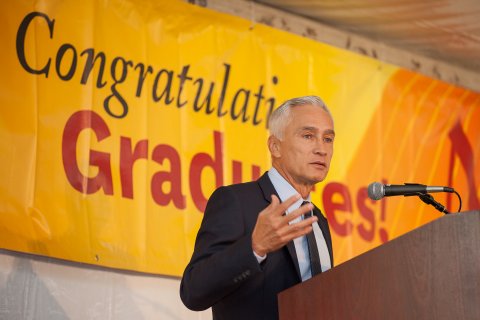 Jorge Ramos, anchor for Univision and Fusion, delivers the address at the Journalism ceremony for the USC Annenberg School for Communication and Journalism on May 15, 2015.

USC Annenberg / Brett Van Ort
Ramos, an internationally recognized journalist who’s often called the Walter Cronkite of Latino America, last month was anointed one of TIME magazine’s 2015 TIME 100, its annual roster of the 100 most influential people in the world. In addition, the outlet selected Ramos for one of its five printed covers.

Ramos delivered a rousing message that aimed to stoke the fires of young journalists and public relations professionals.

“You have to challenge authority. Be a rebel. Your most important social responsibility is to prevent the abuse by those who are in power,” he told the crowd. “Ask tough questions. Don’t be scared … And your attitude should be that if you don’t ask that question of the President, the mayor, the senator, no one else will. Don’t look around to see if someone else is going to do it — it is your responsibility.

To the future PR practitioners, he counseled them that taking responsibility is vital to their careers as well. For ethical and successful PR professionals, their integrity and reputation is the capital they will use to build their livelihoods.

“Working in-house, PR pros need to be able to ask tough questions of their CEO, or their elected official or executive director — whether they are working at a for-profit, government or non-profit. You need to counsel transparency and always push for the truth to be shared. The secrets are never secrets.”

Ramos, who came to United States as a student when he was 24, is famous for asking high-profile sources direct, hard questions. He told grads that he left Mexico in the early 1980s to escape the censorship that plagues journalists there. He sold his Volkswagen Beetle and used the cash to settle in Los Angeles as a student.

“I didn’t know anything about this business, but I did know that I didn’t want to be a censored journalist,” Ramos said.

Ramos soon got a job at KMEX-TV, which became an affiliate of Univision. Within a couple of years, he was anchoring “Noticiero Univision,” the network’s evening newscast. He still holds that post and also hosts “Al Punto,” a weekly, in-depth public affairs program. On Fusion, he hosts the weekly “AMERICA with Jorge Ramos.”

In his speech to graduates, Ramos revealed what’s going on in his head when he interviews even the highest-profile sources and leads them into conversation that makes them both uncomfortable.

“When you think of a question, and it makes you tremble, and your hands start sweating, then you know that’s a question you have to ask. Do it,” he said. “Right there, when you’re having doubts, that’s when you have to have the courage to ask tough questions.”

The really good journalists are the ones that take a stand with those who have no voice and no rights, Ramos said.

“Maybe you don’t know it yet, but you actually chose to be a fighter. Don’t quit now.”

And don’t do it with the hopes of becoming famous — or rich. “If you want to be famous? Well, you better try ‘Dancing with the Stars,’” he said, drawing loud laughter from the crowd.

“But if hell is doing over and over again things you hate to do, then journalism and public relations is exactly the opposite of that. No day has been the same for me in decades. And that is paradise.”

Ramos acknowledged that journalism and public relations “are in the middle of a storm.”

“We are producing television programs for people who don’t even own a television set,” he said. And he admitted that he can’t compete with social media when it comes to on-the-street reporting.

But that doesn’t mean journalists are obsolete. Quite the opposite, Ramos said.

“With millions of tidbits of information, videos and — honestly — a lot of trash, your responsibility is to put that information in perspective, to tell us what is relevant and what is not. And to be fiercely independent.”

Ramos implored graduates to “take a stand, be present, be bold, ask tough questions, tell the truth,” and meanwhile, enjoy the ride.

“This is the most marvelous profession in the world because the world is your newsroom. Now, go out there and start playing.”