February 18, 2015
Kacey Deamer
What does the future hold for media in the digital age? This is the question that students and faculty at USC Annenberg are faced with, and are trying to answer each day. Tuesday afternoon, the question was posed to two of the most influential people in media: Chairman and CEO of Disney, Bob Iger, and Editor of Vanity Fair, Graydon Carter. 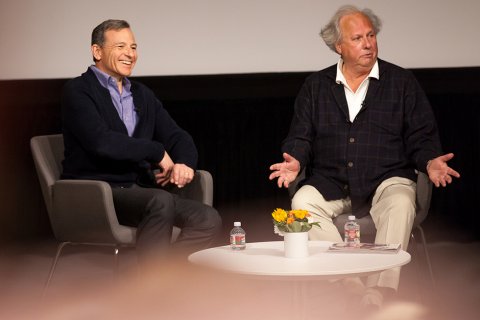 The special event, “Managing Media in the Digital Age,” was moderated by Willow Bay, director of the School of Journalism. Bay introduced the two before handing it over to Iger, her husband, to lead to conversation with Carter. From magazine publishing to Disney princesses, an overflowing audience in Wallis Annenberg Hall was treated to anecdotes and advice from the media managers.
Starting with Vanity Fair, Iger asked Carter about the state of the magazine business and print versus digital. As a monthly magazine, Vanity Fair covers news in a way that is “halfway between the first onslaught of the story, and a book,” Carter said. But in addition to the expectation of strong monthly content that tackles stories in a wider context, there is also the expectation that the brand offer content online in a more time-sensitive manner.
“How important is it that it exists in atoms instead of bits?” Iger asked Carter of continuing to publish a physical print magazine. Carter explained there has been a generational shift in the consumption of media. He offered the example that 10 years ago, parents would have had a stack of Disney films in their living room. Then five years ago it would be a collection of DVDs. Now, there’s no physical object because those same films are being streamed online. Vanity Fair has experienced that same evolution, with their website and tablet edition, while maintaining their original magazine. In discussing the magazine itself, Iger asked Carter about the role of longform journalism, now that stories can be broken down into lists or 140 character tweets. Length doesn’t matter, Carter responded, because its well-done people will read it.
"A great 30-page magazine article ends before you know it,” Carter said.
Soon the conversation turned to what sells content, and Carter turned the tables on Iger — taking on his more natural role of interviewer instead of interviewee. He asked the Disney CEO about the media company’s audience: Disney would grab kids’ attention around age two and would lose them around 10. Mixed in would be parents and grandparents, of course, but there were large generational gaps that Disney couldn’t seem to fill. “We just had to get better,” Iger said. “We had to make things that were ... more likeable.” Iger explained that these conversations often centered on whether Disney should change its standards, adding more violence or “saucier language.” Rather than change Disney, Iger looked at acquiring other properties to fill these roles, like Marvel Studios and Lucasfilm.
The conversation eventually transitioned into a question-and-answer session with the audience. Jonathan Taplin, professor and director of the Annenberg Innovation Lab, noted the increased prevalence of piracy — he even mentioned how easy it was to find The Avengers online via a simple Google search. “Do either of you think Google could be more supportive of the creative community?” Taplin asked. Iger said he has spoken to Google, and that over time the search-engine has become more receptive. However, it is a “whack-a-mole” situation due to the sheer volume of pirated material that exists. Iger said the important thing for people to understand is that content has value. “The distribution of pirated goods really has no value to society,” he said. The final question was asked by a student, who was curious what Iger and Carter look for in young employees and what advice they’d give USC Annenberg students. Iger noted the value of classroom and practical experience, specifically commenting on the USC Annenberg Media Center as a great example of how these two qualities can come together. “I benefitted a lot from showing an interest in learning and doing at the same time,” Iger shared. His went into his first job as a production assistant with more practical experience than his colleagues. Carter said simply: “If you can write a great, really charming letter, you can get in to see anyone.”

A look back at election night at Wallis Annenberg Hall