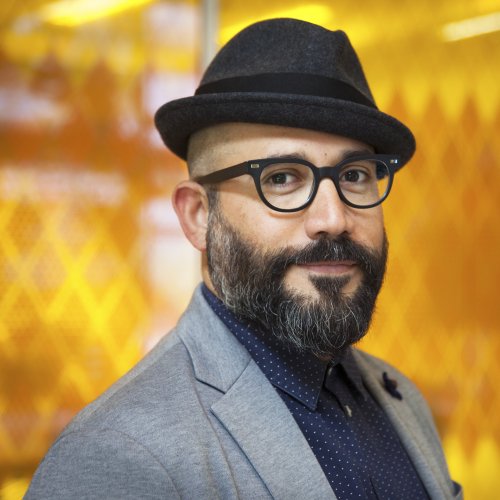 Robert Hernandez, aka WebJournalist, has made a name for himself as a journalist of the web, not just on the web. His primary focus is exploring and developing the intersection of technology and journalism — to empower people, inform reporting and storytelling, engage community, improve distribution and, whenever possible, enhance revenue. He is a professor of professional practice at USC Annenberg, but he’s not an academic… he’s more of a “hackademic” that specializes in “MacGyvering” digital journalism through emerging technologies.

His most recent work includes augmented reality, wearables/Google glass and virtual reality — he and his students produce VR experiences under their brand: JOVRNALISM. Their work has won awards from the Webby Awards, the Shorty Awards, the Online News Association, Society of Professional Journalists, among others, and can be seen in Al Jazeera, The New York Times, NBC, NPR, ProPublica, USA Today and in their own iOS/Android app.

He has worked for seattletimes.com, SFGate.com, eXaminer.com, La Prensa Gráfica, among others. Hernandez is also the co-founder of #wjchat and co-creator of the Diversify Journalism Project. He has served on boards that have included Chicas Poderosas, InquireFirst, the Online News Association and the National Association of Hispanic Journalists (where he is a lifetime member). He is also a Journalism 360 ambassador and program lead. He is the recipient of SPJ’s 2015 Distinguished Teaching in Journalism Award and the 2018 NAHJ Si Se Puede Award. He has made it to imgur’s front page more than once. He connects dots and people.

“My first impressions on the Oculus GO” (Immersive Shooter, 2018).