On Friday, Nov. 2, the Annenberg Inclusion Initiative had the pleasure of attending TheWrap’s Power Women Summit held at the Intercontinental Hotel in Downtown Los Angeles. The theme of the summit was “The Road to 5050 By 2020,” and featured Q&A’s, breakout sessions and workshops that tackled the question, “How do we achieve gender balance by the year 2020?” Here are a few highlights from the day.

The day began with opening remarks from TheWrap’s Founder and CEO Sharon Waxman, who announced that she and TheWrap were committing to gender parity among their critics by Jan. 1, 2019. 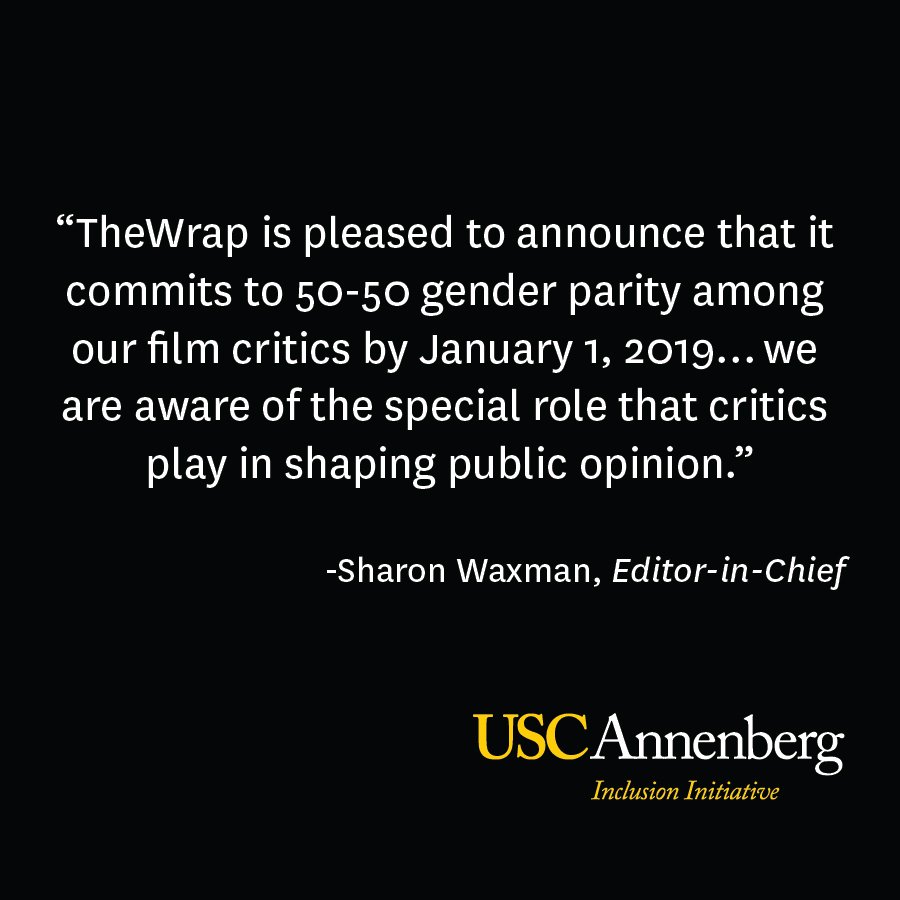 The Annenberg Inclusion Initiative was ecstatic to hear her commitment to inclusion and we are looking forward to seeing other publications commit to gender parity among their critics as well.

After an incredible lineup of speakers, including Tarana Burke, Jill Soloway, and Dolores Huerta, Dr. Stacy L. Smith took the stage with actor Felicity Jones and discussed her upcoming movie, On the Basis of Sex. The movie chronicles the inspiring story of Supreme Court Justice Ruth Bader Ginsburg and her fight for gender equality. 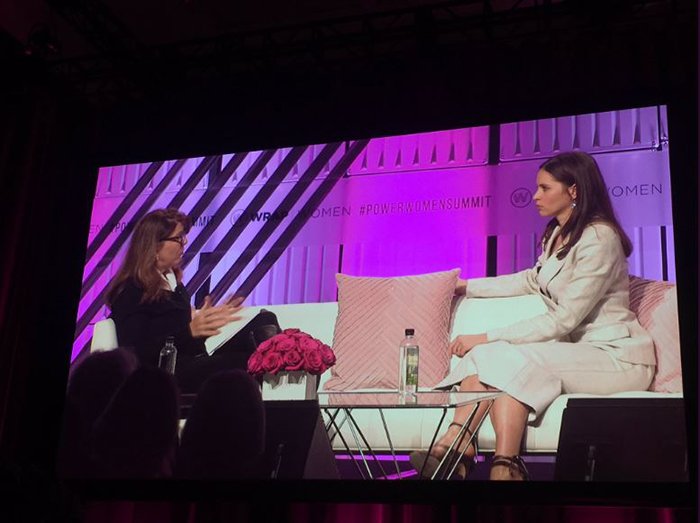 During the interview, Dr. Stacy L. Smith noted that Felicity Jones over-indexes against the industry average when it comes to actors who work with female directors. Dr. Smith then asked Ms. Jones what it was like working with a female director, Mimi Leder, for this film. She responded, “I feel Mimi had an innate understanding of what Ruth went through. And particularly, so much of Mimi’s career had been the balance of bringing up her daughter and having a career... And I feel the film industry needs to adapt to a way of working that allows for childcare to be a part of the system because then we can forge a way where women can push into those leadership roles with that level of support.” Upon hearing this answer, the audience gave her a deserving round of applause.

If you would like to see an excerpt from the interview, check out this clip, courtesy of TheWrap.

Ai² had its own activation booth at the event titled “Inequality in 1,100 Popular Films.” The booth showcased our most recent study on inclusion in the film industry. Seeing the dismal numbers of all women, regardless of race or sexual identity, both in front and behind the camera, was shocking to the guests of the booth. If you would like to read the study and learn how to increase the number of women working in Hollywood, visit here to learn more. 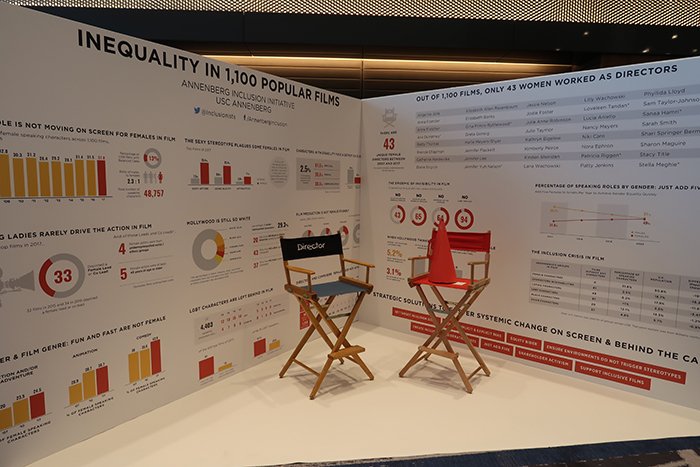 Throughout the day, there were various breakout sessions for our team to choose from to learn more about achieving gender balance amongst the entertainment, media, and technology industries. One of our student coders, Anushka, discovered that there was a common theme at each of the breakout sessions. She noted:

“A common theme that echoed throughout the conference was the idea of sisterhood. I probably heard it once from every speaker. I have my own ‘personal board of directors’ and a strong sisterhood, and I realize I take it for granted. Sherry Lansing said that she didn’t have a sisterhood to go through her career with because at the time women believed that there was only one seat at the table. Now everyone is pulling up chairs for each other.”

There were some things about the event that were pretty disappointing. For example, our student worker, Morgan, noticed that the event was rushed and that speakers relied on clichés to make their points. She stated:

“Maybe it was that the event was a little behind schedule, or that as a college student, I am used to two-hour lectures, but it seemed that each speaker had to get off stage before they could truly get into the heart of the matter. Instead, I heard a lot of things you’d see on a trendy, politically savvy t-shirt.”

“When standing in on the VICE News session, which happened to be overly packed much like many of the other sessions, it came to my attention that, of the three women being questioned, the one woman of color was hardly asked any questions. It felt strange being at an event centered around inclusivity, but still seemed to isolate many groups of women.”

Nina’s comments are duly noted, and I can also attest to a lack of intersectionality at the event overall. Fortunately, there was an instance where intersectionality was discussed at great length, and it was during Dolores Huerta’s interview on the main stage.

Ms. Huerta, a civil rights activist and community organizer, spoke about education and immigration reform. Because of their similar backgrounds, our student coder, Karla, felt that Dolores’ speech really resonated with her. She stated:

“It was so important for me as a South Central resident to hear someone discuss the importance of education reform and immigration. It was incredibly powerful for me to hear and feel the power of the Latina voice. Being able to hear from someone that knew the struggle of being a double minority (female and a person of color) made me feel emotional. Growing up I have had very little interactions with Latina women who actually cared to change the way our neighborhoods functioned and the way we are viewed. During this panel I felt represented in every sense of the word. It wasn’t just my gender being addressed it was my history, my people, my culture.”

Karla even got to take a picture with Dolores: 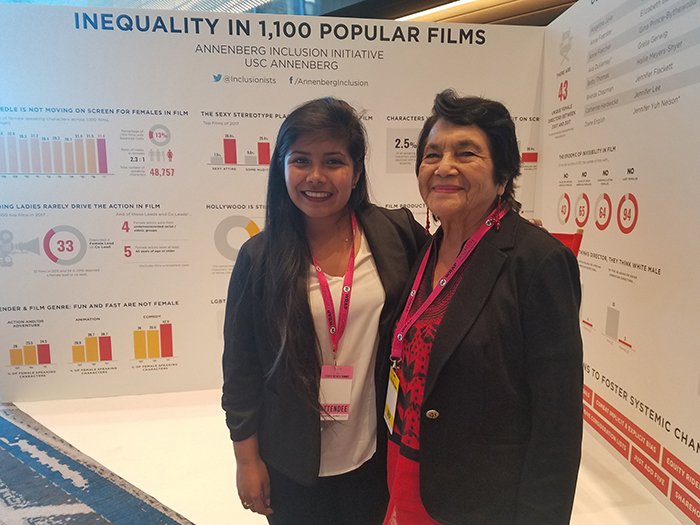 I’m happy Dolores’ work resonated with Karla, and I hope that more events in the future will realize the importance of intersectionality.

All in all, we’re happy to have attended the event and we’re looking forward to attending more events that strive to make gender equality a reality in the future. 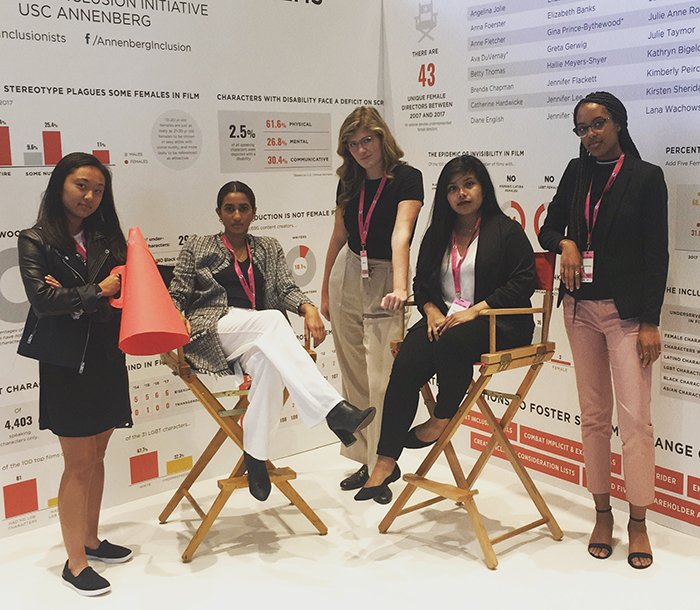 P.S. Who needs the Avengers when we have these powerful Inclusionists?

Special thanks to Ai² students Morgan Grimm, Karla Hernandez, Nina Baker-Mason, and Anushka Joshi for contributing to this blog post. 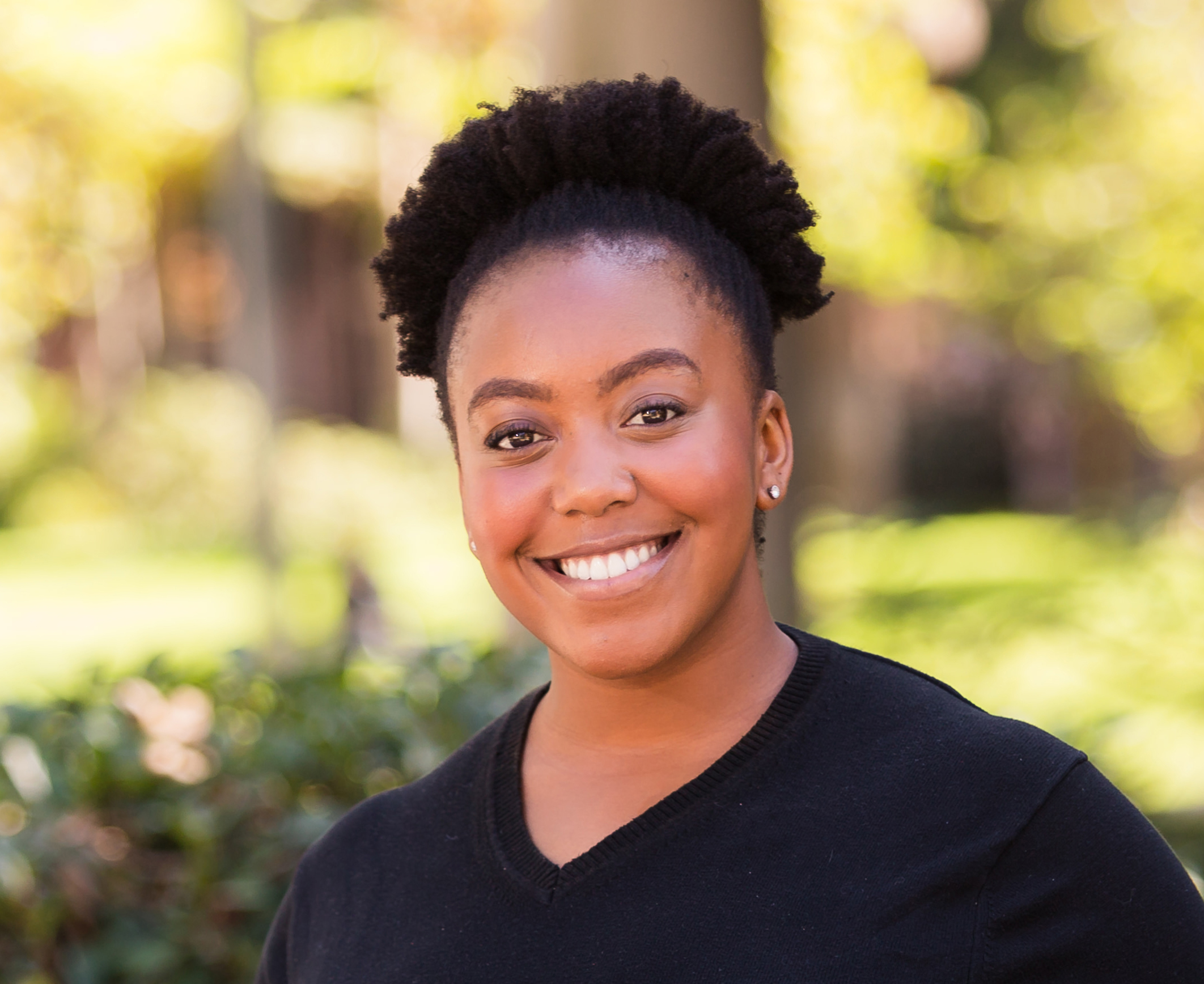 Adaeze is the Will & Jada Smith Family Foundation Junior Fellow for the Annenberg Inclusion Initiative.