Ever since he attended the High School for Innovation in Advertising and Media in his native Brooklyn, Jermaine Anthony Richards was on track for a career in advertising. For his undergraduate studies at the City University of New York, he focused on computer science and application software development, with an eye toward building interactive experiences for brands.

But it wasn’t until he was at his first job with Wieden+Kennedy in Portland, Oregon, in 2017 that he began to realize that his digital and visual storytelling skills could be used to tackle bigger issues than brand identity.

Working with the multidisciplinary artist Momo Pixel, Richards produced a web-based, 8-bit-style game called Hair Nah, in which a Black woman has to swat away the hands of non-Black people trying to touch her hair without permission. “What we wanted to do with this game was really think about these universal curses of racial injustice and gender inequality,” he said. “This led me to thinking about how creative technology could challenge these very universal issues in the world.” 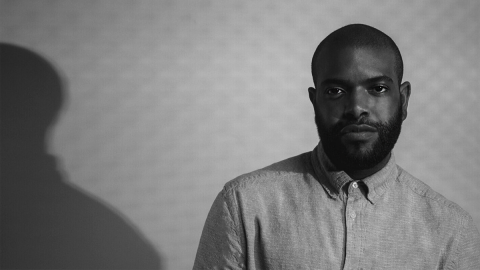 Photo courtesy of Jermaine Richards
Richards says he wanted to dig into global inequality, exploring how technology could amplify the perspectives of people who were facing injustice and help them craft solutions. “I wanted to research that topic, but I didn't necessarily have the tools to do it,” he said.

This drive led him to enroll in the master’s degree in global communication offered by USC Annenberg and the London School of Economics. “The curriculum is dense, rich, and theory-laden, and it also offered this opportunity to go abroad, get that global perspective and meet people from around the world that I wouldn’t have been able to meet any other way,” he said.

Richards completed his LSE London stint during the 2019-20 academic year. In 2020-21, he moved to Atlanta and studied remotely with USC Annenberg due to the COVID-19 pandemic. Throughout his time in the program, his experience working on Hair Nah has remained a touchstone, inspiring him to further explore the connection between how private companies can use technology to serve the public interest.

Much of his research, Richards says, has focused on finding technological solutions to meet the needs of vulnerable populations. “Any discussion of Twitter or Facebook will have to include how they address harassment and racism,” he said. “We're thinking about how platforms can facilitate a more congenial sense of community in their spaces. Anything harrowing that is going on in everyday physical society is being transported into the virtual space.”

At the LSE, Richards wrote his dissertation on the United Nations Global Pulse initiative, which uses artificial intelligence and big data to help drive development, humanitarian action, and peace. If international organizations can align their priorities more closely with those of affected populations, “there's a lot of potential for private organizations, governments and intergovernmental organizations to join in on the fight towards peace and justice,” he said. “It’s about getting the private sector to understand the universal value of helping society while getting nothing directly in return. How can we get to the center of finding ways that private organizations and public organizations can work together to facilitate the ethical infrastructure that we can all live in?”

If used correctly, he says, big data can help private companies ask — and answer — big moral and ethical questions. “Who are we most answerable to?” he said. “Are we answerable to the people that are marginalized, or are we answerable to our private stakeholders? How hard are we working toward being inclusive?”

Richards hopes to continue these lines of inquiry as a doctoral student — and is currently weighing PhD offers from several universities. “The beautiful thing about the global communication program is that it’s so broad-based and impact-oriented, it’s prepared me for anything,” he said.